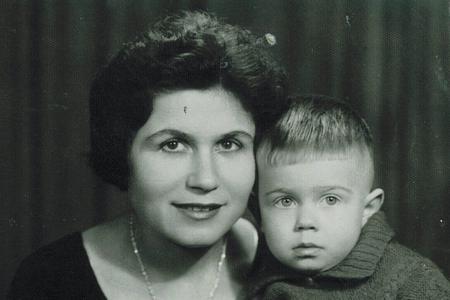 Aniela Klosinska on the left, with her brother, Rysiek, and his wife, Czesia, in Warsaw in the early 2000s.

A clay yurt, often considered to be the herder's most valuable possession. 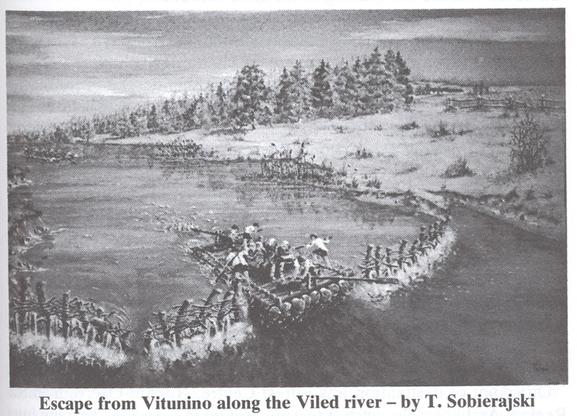 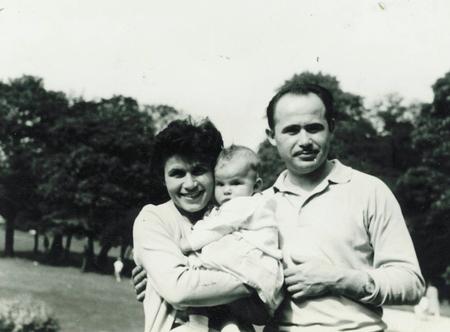 I was born in the well-known settlement, Osada Krechowiecka, county Równe in Wolyn (Volhynia) in 1933. My father was Klemens Grzybowski, from the Krechowiecki Cavalry Regiment, awarded with the War Order of Virtuti Militari, Order of the Cross of Independence, and others. My mother’s maiden name was Dudelzak. On the 10 February 1940, the whole of our family comprising parents and five children: Helena aged 12, Ryszard 10, Henryk 8, Aniela 6 and Michał 4 were deported to the tajga beyond the Urals, to Mołotowska Oblast, to the Dziedówka family work camp.

Life in the camp was very hard; father’s work was heavy in primitive conditions for a meagre several dozen grams of bread, hunger, lice, and bedbugs. In this camp I was operated on by a local ‘quack’. The gland took many years to heal.

The news of the ‘amnesty’ in 1941 was welcomed very enthusiastically.  Father together with two other exiled deportees felled several large trees and built a raft, on which we reached the nearest railway station along the River Uszczorna. We made our way south because we were told that a Polish Army was being formed there.

My brother, Michał, died en route in Tashkent. On route we had no alternative but to bury his body by railway tracks. The death of my brother in the arms of my sister, Helena and his burial by railway tracks would come back to haunt me for a long time.

We stopped temporarily in the Kizioł-Zioł state collective farm in Uzbekistan near Turkestan. We lived in a clay yurt, in hunger and destitution. A clay yurt is a house made out of a lattice of bent wood. It is traditionally used by nomads in central Asia and Mongolia. Father applied to the Polish Army which was being formed. Upon his departure, when she had heard that only children would be able to leave for Persia with the army, Mother handed my sister and two brothers to the orphanage in Turkestan.

In the morning, I busied myself with the daily domestic chores and tried to wake Mother up. Unable to wake her up, I went to the Uzbek woman and asked her to come and see what had happened.  The notion of death hadn’t dawn on me.  It was not until they took Mother’s body, when they lowered it into the grave, that I realised that she would be no more. What did I think then? I was never able to articulate this in words as I was overwhelmed by tears. It was 1942. I was left on my own.

The head of the collective farm took care of me.  He took me in. I was called ‘kadłubek’ (limbless, skin and bone) He fed me with some fat or other and milk straight from the cow. This man, by the name of Barakiw, was called up to the army.  His wife was instructed not to keep me.  So she took me to a children’s home in Turkestan.

Life in the children’s home can only be understood and appreciated by someone who was there themselves.  Dreadful hunger. In the morning, we were given 5 decagram of bread, as black as the soil, and a cup of coffee. For lunch, there was pea soup without potatoes and a piece of bread.  Supper was similar to breakfast. They were very frugal with the food because no-one knew how long the war would last.

I remember I had a foretaste of death myself. I went outside one day to some castle or palace ruins because we children used to forage for food even in the bins.  I was very weak and must have fainted out there, because, upon awakening I found myself in hospital.  One of the girls during her rota in the kitchen had eaten pickled tomatoes on an empty stomach and died from intestinal torsion.  How delightful life was in such inhuman conditions, as reflected in this song sung by the children:

I remember too the ‘naked’ days when everyone had to lie naked on their beds while their clothes were being washed and de-liced, and heads shaved.

Suddenly, one day, we heard the news that we were returning home, to Poland. It was 1946.  With a group of other children, I returned too. People from the whole of Poland came forward to collect their relatives and their children. I waited, but no-one came forward for me. Children who had no-one to go to were distributed amongst the different children’s homes. I was sent to the Benedictines in Kwidzyń.  There I completed my elementary education. In 1949, when I was 16, I was directed to secondary school of Hotel and Catering in Sopot under the care of the Children’s Home.  The majority of students were children from normal families. There were several orphans. Every Christmas, the students would return home. A handful of ‘niczyich’ (belonging to no-one) remained. This was not Christmas; this was despair.  Our carers were given time off.  The charges had to manage on their own, as best they could. I completed my secondary education with a ‘Good’ grade.

Towards the end of 1949, the Red Cross informed me that my Father was in England. I welcomed this news with great joy and relief that I was not an orphan and that, apart from my Father, I had a sister and a brother. After leaving the USSR with the orphanage via Persia and India (where Henryk died tragically before 1945), my siblings, Helen and Ryszard joined Father in England in 1947.  They did not meet up with me until 1961, for the first time after 20 years. Unfortunately, Father never saw me again as he died in 1957 from a heart attack.

After finishing her studies, Aniela was employed in a hotel in Toruń. It was 1955.  Here she met and married Stefan Kłosiński.  Their three children turned out well. Aniela finished her career as the Manageress of the hotel.  When she retired, she took up voluntary work in the education office in Toruń. With great dedication, she prepared meals for poor children. She was a very religious person. Every day, whenever possible, she would attend daily morning Mass.

She was a loving mother, grandmother of six grandchildren and great grandmother of four great-grandchildren.  Under the protective care of her loving daughter, Grażyna and son-in-law, Jarek, as well as grandchildren Kamila and Aldona, she came to the end of her difficult journey on this earth on 16 February 2011 in Warsaw, where she is buried.

The orphanage refused to take me in because I was ill with a flamed and festering wound. The two of us were left behind. I was almost 8 and Mother was ill with abdominal typhus fever. Who fed us?  I only remember that some good people brought us bread (lepioszki/pancakes) and milk.  One particular evening, Mother asked me to sit with her. She said to me, ‘I shall die tonight’. She told me to go to the head of the collective farm and tell him about the death, with the hope that he would take care of me.  In the night, I woke up and felt terribly cold.  We used to sleep under one cover, huddled together. I moved away from Mother, removed the cover, unaware that this cold was coming from her dead body. 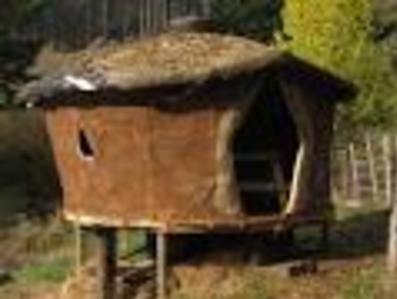 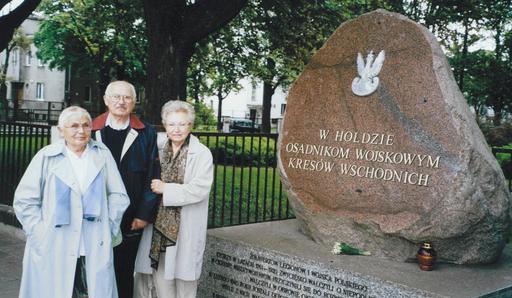 Aniela Klosinska with son, Andrzej in her arms,