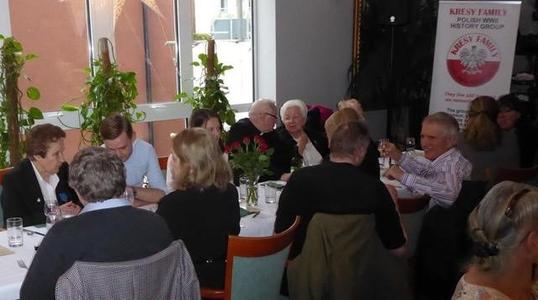 ​Mirka reminded guests how the event is an opportunity to remember and share, and to meet old friends and make new friends. Everyone has a story to tell. Ksiądz Wyłężek said grace before the meal, calling to mind  those who had suffered and did not survive the deprivations and the cruelty.

She realised that  probably few people had and maybe thanks to the film, they will learn about this story. She recognised the parallels of capture, deportation and slavery in previous generations  with those of her own people on the African continent. The film is scheduled for general release in the United States in May and negotiations are taking place for the UK and Poland. 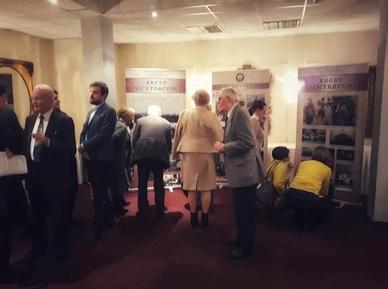 PAST EVENTS AND REVIEWS

We Remember those Deported from Kresy to Siberia

At the Lowiczanka restaurant in POSK, London, on Saturday,10th February 2018,  Kresy Family Polish WWII History Group commemorated the 78th anniversary of the first of four deportations of an estimated 1.7 million Polish citizens to Siberia in 1940 and 1941.

Mirka Wojnar, Chair, welcomed the honoured guests Consul Renata Wasilewska-Mazur representing Ambassador Rzegocki, Ksiądz, Prałat Stefan Wyłężek and members of the former OROK - Ognisko Rodzin Osadników Kresowych (Association of the Families Borderland Settlers) - survivors of the Siberian work camps and slave labour on Siberian railways, mines and collectives. Amongst the guests, were three Polish Army veterans who were greeted with loud and generous applause by three generations, families and friends from all over Great Britain and from abroad.

After the delicious lunch served so skillfully to over 100 guests, Carol Harding, film producer, of the forthcoming film “The Last Witness” - written and directed by Piotr Szkopiak - outlined the storyline of the drama, set in 1947 Britain that  reveals the story of Stalin's massacres of Polish military personnel and officials in the Katyn Forest and elsewhere in 1940. Carol spoke of her eight-year collaboration with the film director Piotr Szkopiak whose idea it was 17 years ago. Carol, with a career in the media, including the BBC, confessed that as a history graduate she had never heard of Katyn.

There followed a very enjoyable and entertaining rendition of many well-known songs including Rozkwitały Pęki Białych Róż and Tylko we Lwowie by the talented professional accordion player and singer Paweł Żaba.The guests joined in with great enthusiasm.

Finally, there was a short address from Simon Puriņš who gave details of a project titled Peeling Onions with Granny in which he has collaborated with five other artists of Polish and Latvian heritage. Their productions are being staged on 25th March at the Essex Book Festival, in Kelvedon Hatch, Brentwood. During the afternoon, a sample of exhibits from the exhibition Kresy Nieutracone prepared by  Krzysztof Hoffman was displayed in the restaurant ante-room. Mirka described the collection of original photographs, documents postcards and press cuttings much of which has never previously been available for viewing.  Kresy Family Group will co-sponsor a 10 day display in the  POSK Gallery gallery from 3rd April.

Kresy Family would like to thank the former members of OROK, especially former President Ryszard Grzybowski, for their great help in organizing the meeting.

Return to Past Events page