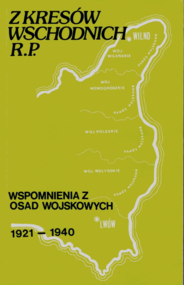 I was given the plot on 27th October 1922. Just under 45 acres in three lots: arable land that was forested with young birch trees which had to be cleared before it could be farmed. The second lot was a forest, and the third was a meadow which was 2.5 km away from the arable part. The meadow was located between Belarusian villages. Belarusians from these villages would steal by stripping the meadow so it had to be guarded at night, by the settlers together. There were five of us military settlers, and two civilian. I had a horse and cart, a plough and harrow, as well as a couple of sheep. There was no house on the plot and I had nowhere to live with my wife. I went to the Ukrainian village to look for somewhere to live. But I encountered substantial difficulties. There were about a hundred houses in the village on both sides of the road. I went from home to home looking for some quarters. Wherever I went, the response I got was negative. “Whatever have you come here for? To take away our land?” [Ed. note. In broken Polish]. Finally, one Belarusian, a certain Grzegorz, took us in, who lived a kilometre from my plot. He let us live in his cellar, but only for a short while, with a tiny bit of luggage (a couple of suitcases), letting us bring some provisions and our own bed. We lived in utter poverty there and in extremely cramped conditions. My wife was allowed to cook something in Gregory’s kitchen from time to time only. I had a brother, Antoni. He lived in Warsaw. I wrote him a letter for him to come and visit me and help me dig an earth-house [ziemianka] on my plot. We survived two whole years in the earth-house which we had dug together.

In 1923, I received some wood for building - 70 cubic metres. I built a house. The rest of the wood was used to build a barn and pigsties, but the wood for the stables and the coach house I took partly from my own forest and partly had to buy from the money I earned. I farmed the second part of the plot - this was very hard work, particularly the rooting out, but somehow one pushed steadily on. We grew wheat and rye, potatoes and vegetables. In 1926, a commission from Brest-upon-Bug came to check how the farm was going. They came, looked everything over, had lunch and went to sleep in the barn on the hay. But after that, the Land Commissary qualified my farm as being sufficiently well managed. And this is how I toiled on my own, with my wife and family, until the year 1938. There were rumours that there would be a war, that the Belarusians would murder us and take our land plots, so I leased my settlement and got a job as a treasurer in the “Kasa Stefczyka” [Ed. note. National Farmers’ Cooperative Bank]. I was then appointed as a bank teller in the District Cooperative where I worked until the time the Bolshevik gang attacked us and we were deported by force to Siberia on 10th February 1940.