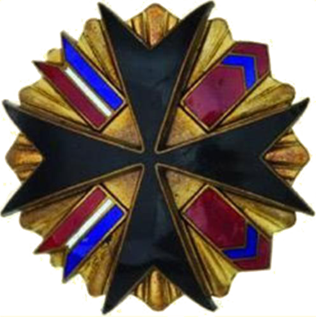 During our stay in Pahlevi, father visited us daily. He was with his detachment in a different location, but their living quarters were similar to ours. He told us that, during our transport from Russia, he was on the same ship as we were, but he was below deck and it was so crowded there that nobody was allowed to go on deck where we and the majority of the civilian population were located. We did not meet him until after our arrival.

After staying on the beach in Pahlevi for about three weeks, we were loaded onto open trucks and began our trip to Tehran.  The road was going over the  Elburz Mountains, very steep and rugged mountains that separated the Caspian Sea from the rest of Persia.

We stopped for the night at the town of Qazvin where we were fed and spent the night sleeping on the floor, in a building that looked like a school. Next morning we resumed our journey and, after a rather uneventful trip, we arrived in Tehran.

In Persia, the Polish authorities started to compile lists containing the identities of the refugees.  Usually, some verification was required to establish one's identity, such as two witnesses, or some written document.

Soon after we came to Tehran, father was discharged from the army. After a short time of being with us, he got a job in the Polish hospital in Tehran. As soon as we got to Tehran, I renewed my insistence on joining the army. My parents objected: there was a school being formed and they said that I should go to school rather than to the army. After many discussions, I agreed to go to school.

In January 1943, I received a request to go to the military camp, which was about two kilometers from our camp. At that time I was not yet 18 years old, the age for the draft, because my birthday was not until 25 July, but the draft covered everybody who was born in 1925 or earlier.  After a physical I was drafted.

Since we were still in school, Mrs Dziewulak, the mother of one of my friends who was also drafted, and who was the wife of a captain in the Polish Army and knew the ropes, arranged that we would be allowed to attend classes and finish our school year. The school year was shortened, so that in January we had completed it.

As soon as we were out of school, by the end of February, we were loaded onto trucks and shipped to Khanaqin (in Arabic -  Bottom of Hell) in Iraq, where the Polish Army was stationed.

I knew that this was the end of my civilian life and my teens. Mother gave me a rosary, kissed me goodbye and father came from the hospital to bid me farewell; some of my friends came to wish me good luck, and I climbed into the truck. There were four of us: Ryszard, Jerzy (Jurek), Brunon and I. That trip opened a new chapter in my life, military service.

Life In the Army

In Khanaqin there was a commission that was recruiting for the Polish Parachute  Brigade that was in training in Scotland. At that time I knew that my brother Wladek was somewhere in England, and I thought that it would be nice to be with him.  Unfortunately, it was not to be.  Ryszard, Jurek and Brunon were accepted after a short physical exam without any questions.  To me the doctor said that I had "noises in my heart", presumably after the typhus.

Shortly after that I received an assignment to the 12th Podolski Lancers Regiment.

The regiment was in Quizil Ribat (Hot Frying Pan in Arabic) in the middle of Iraq. Of course, the lancers of the Podolski Regiment did not have horses. They had American armored cars - Staghound and British infantry carriers on tracks. The Staghound had a 37mm. cannon and two machine guns, "Browning" 7.62mm., one of which was synchronized with the cannon and manned by the front gunner and the other was in the turret. The cannon was very accurate.

I was assigned to the mortar platoon. We had an infantry carrier. There were five men to one mortar, and there were six mortars in a platoon. Each mortar was on one carrier. A carrier was a small vehicle on tracks, and normally it had two men: the driver and a gunner who had a "Bren" machine gun. We had to squeeze five men into the vehicle and, in addition, we had to take as much ammunition as we could because you never knew when the additional supply of ammo would be available. It was very cozy.

During the summer months that we were in Quizil-Ribat, the heat was oppressive. I think the temperature reached 120°F in the shade. In May, any grass that was in the area was burned out.  We had tropical hats, and we did not have any duties from 11.00 to 16.00. Our main relief from the heat was  the nearby river where we used to go swimming. We received our equipment, our carriers, 3-inch mortars (British), our Enfield rifles and other elements of standard military equipment. Our daily exercises consisted mainly of operating the mortars, learning how to quickly mount in a firing position and zeroing in on a target. Additionally, we were learning to handle the side arms and all about our vehicles. Everybody had to know how to drive a truck and a carrier.

I don't remember in which month we moved from Quizil-Ribat, which is located in the central part of Iraq, to Altun Kopru, near Kirkuk, in northern Iraq.

Sometime in April or May of 1943, we learned about the Katyn Massacre. The mood in the regiment was very subdued. There had been rumors about the mass killing of Polish officers captured by the Soviets during the 1939 campaign, but these were only rumors.  Now there was the sad confirmation of these rumors.

In August the  2nd Polish Corps was moved to Palestine. The trip was interesting. We went in trucks through Jordan, through the desert, through completely deserted land. Our cooks always  went ahead of the main body of the regiment and, when we arrived to the place where we were to spend the night, food was already prepared. The military had stations established for the troops at certain points, so that we did not have to bother with putting up our tents. The passage took about a week.

In Palestine, the military authorities organized a high school at the 3rd Carpathian Division. At that time we became the reconnaissance regiment  of the 3rd Division, and I was sent to the school. Our teachers were recruited from officers that had had anything to do with education before the war. We hardly had any books. Teachers had to rely on their knowledge and  memory regarding the subject matter and we had to take copious notes of everything that was said in the class to have something to study from. Everybody realized that these were not the best conditions to study in, but it was the best that was available, so there was no room for complaints.

We thought then that we would be sent to combat in Italy. Our rumors proved to be correct, and at the end of November we went to Egypt.

In Egypt, we had a short get-together for the students of the high school. We did not have any classes but we were given some books, I don't remember which, and were told to study them and that we will be called for examinations. In view of the forthcoming trip to combat nobody took this advice seriously. Everybody was talking about going to Italy, but there were quiet rumors that we may be sent to Turkey.

Finally, sometime in the middle of December, we were loaded onto transport ships and away we went to Italy.

Our teachers were recruited from the camp population and they did the best they could to put some wisdom into our heads. 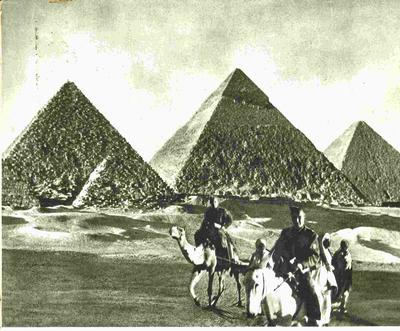 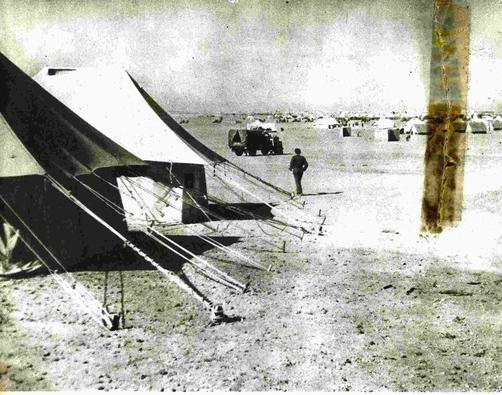 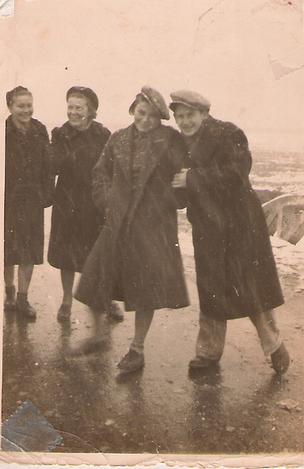 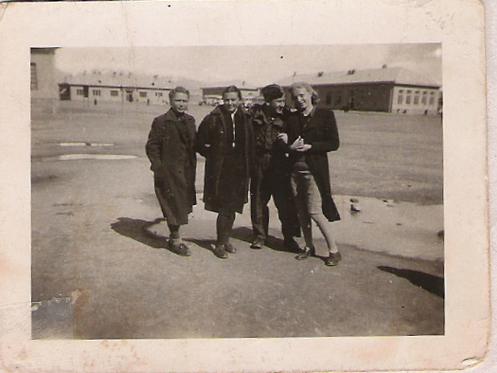 We formed a small group of young boys and girls and did the things that teenagers do: we played volley ball, went to Tehran to the movies together and went for walks and so on.

Our new stop was a large British encampment in Quassassin, near the town of Ismaila. There I took the opportunity to visit the pyramids.

The name Podolski is from the Podole region in Poland, where the Regiment was stationed before the war. I was very glad that I was assigned to the lancers regiment. Throughout the history of Poland the cavalry was the pride of the army.

During that time we had the opportunity to go to Jerusalem, Bethlehem and other places known to us from the Bible. In recognition of our odyssey, the Church considered us to be pilgrims and we were given the right to receive the Silver Cross of Jerusalem (for £3.00). We were supposed to be in high school for five months. But soon after we started our classes, the orders were changed. After six weeks we were sent to our regiments and with some British troops we participated in big exercises that lasted two weeks.

Embarking for journey from Egypt to Italy. 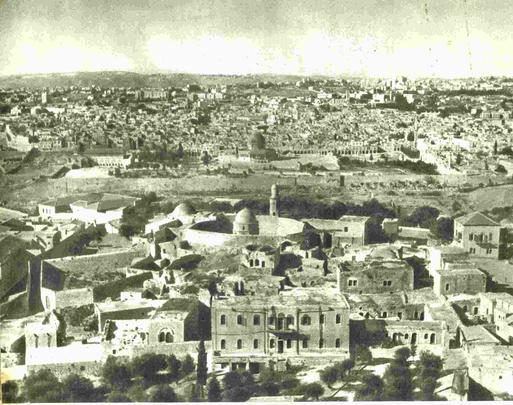 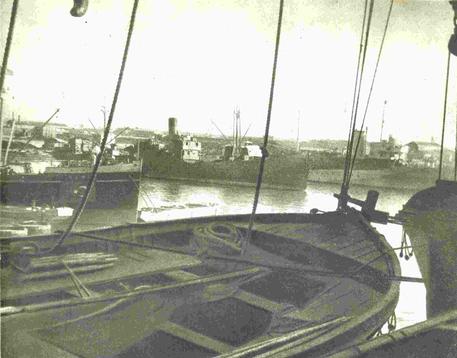