Link to the event on 6 February 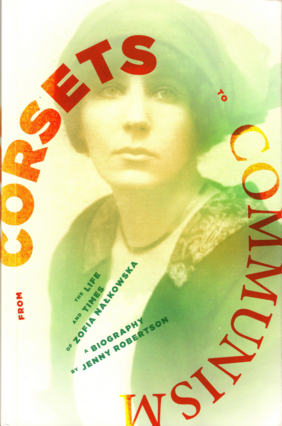 As the son of Polish survivors of Soviet deportation to Siberia during WWII, born and raised in London, I am surprised that I have not previously been aware of Zofia Nałkowska.

For those who have not heard of or read this author, this biography whets the appetite for Poland’s leading modernist writer.  It has taken a Scot to write a biography in English to have brought this renowned Polish author to my attention with a well researched and written work.  Nałkowska’s stature is established very early on in the book with a quote from her colleague “If you wrote in French, English or Norwegian you would be the most famous writer in the world”; and later, ” many marvel at her ability to use words like a painter”.

​Commemoration of the deportations from Polish borderlands in 1940/41

KRESY FAMILY invites you, your family and friends, to the commemoration of the deportations from Polish borderlands in 1940/41.

This year a commemorative lunch at the Lowiczanka restaurant at POSK, London is not possible. Instead it will be held by Zoom and enable participation by friends and supporters from across the world. We suggest you bring a glass of wine or a cup of your favourite tea to raise together. Free tickets are available from Eventbrite by clicking the link below.

The programme will feature:

Leokadia Majewicz
survivor, speaker and author. Leokadia will give a talk about her childhood recollections of life in pre-war Polish Kresy, her deportation, life in Siberia and what happened after.


Martin Stepek
Polish/Scottish mindfulness teacher and campaigner, poet and author. Martin will recite a selection of his own poetry. This story is dear to his heart and inspires his poetry.

"From Corsets to Communism, life and times of Zofia Nałkowska".
A biography by Jenny Robertson
​
A review by Tadek Wojewódka

Jenny Robertson’s recently published book tells of the life of an impoverished but talented woman, born in Warsaw in November 1884 into a Polish society, not only divested of its nationhood by neighbouring oppressors, but one that is male-dominated and conservative. In 1907, she spoke at the first Women’s Conference in Poland calling for sexual equality and yet, as her life unfolds, this ambition remains unfulfilled through two marriages and a series of affairs in which she experiences unfaithfulness and betrayal, a theme explored in “Women” (1906) and  “Narcissa” (1910).

Nałkowska’s writings are drawn from her own life experiences during a period of violent upheaval - the First World War, Polish independence, the inter-war years, Nazi invasion and occupation, and a Communist regime. “Count Emil” (Hrabia Emil, 1920) sets a contemporary romance within a backdrop of the Polish-Russian conflict and addresses themes of war; “The Romance of Teresa Hennert” (Romans Teresy Hennert 1924) and “The Knots of Life” (Węzły Życia, 1948) presents criticism of Polish governments of the Second Polish Republic;  A stay at a Swiss sanatorium in Leysin in 1925 provided the material for "Choucas", (French name for Alpine choughs).  It explores themes of nationalism, love, suffering, God and war through pen portraits of a variety of Europeans.  “Medallions” (Medaliony 1946), a collection of short stories, brings into focus the reality of the Nazi occupation.

Nałkowska is known to generations of post war Polish secondary school students through the study of the set book “Boundary” (Granica 1935), her most acclaimed novel, set in Grodno in the Eastern borderlands (Kresy) for which she won the state prize in 1936.  However, her work fell out of favour and suffered criticism under the Communist regime which left her feeling that she had no further contribution to make to Polish literature.  She did not join the Communist party but, yet, was appointed to the Committee for the Investigation of Nazi War Crimes. Her life and work have become better known since the publication of her diaries in six volumes, the first of which was published in 1975 and the last in 2001.  She is the author of 15 novels, 11 collections of stories and three plays.


Jenny Robertson, author, poet and teacher, first had contact with “things Polish” as a schoolgirl, corresponding with a Polish lady in a displaced persons camp in Germany.  She graduated in Polish from Glasgow University and spent a post-graduate year in Warsaw. Since then she has developed an intense interest in Eastern Europe. She is author of books including, “War Hero Bear” (2014) about Wojtek the bear adopted by Polish soldiers during WWII, “Don’t go to Uncle’s Wedding” ( 2000) about the Holocaust and “From the Volga to the Clyde” (2014) a collection of true, thought-provoking stories, winner of US Premier Book Achievement Award.
Her output extends to some 40 titles for children as well as adults ranging from Bible stories to themes of mental health.

“Corsets to Communism” is highly recommended and is available from

Listen to past radio broadcasts

Syrena Songs - BBC World Service available on Iplayer
Broadcast on 5 August - Monica Whitlock tells Syrena Record's story and travels to Warsaw to hear from a new generation of musicians recreating Syrena's sound. Syrena Records was created in 1904. It sold millions of discs to new audiences hungry for shellac delights - opera singers, cantors, political humour and Yiddish theatre. Success allowed founder Juliusz Feigenbaum to invest in state of the art recording technology. By the time independent Poland was reborn in 1918 Syrena was well placed to shape the sound of a new nation.
Hot tango and jazz were performed by superb musicians and singers, mostly Jewish, mostly of a generation breaking away from the old world and facing the new. Adam Aston, Hanka Ordonka, Henryk Wars, Micheslaw Fogg and others cut disc after disc before playing in the elite nightclubs of Warsaw. Some 14,000 records by artists at the top of their game. Outpourings of Yiddish tango, slinky foxtrots, romantic ballads. Records in Hebrew, Yiddish, and Polish. Songs such as The Last Sunday and Donna Clara went international.
In 1939, invasion and war ended Syrena and the Polish nation. Its factory and archives destroyed, its artists murdered or scattered in exile. But there was one last tune to play. Henryk Wars, former musical director at Syrena, formed an orchestra that became the soundtrack of Poles in exile and in military uniform. From Tehran to Palestine to the fortress of Monte Cassino, those musicians and singers that had once been the heart of Syrena now played songs of a lost nation, creating the anthemic Red Poppies of Monte Cassino.
Available on repeat on BBC Iplayer radio - now expired.

Broadcast on Tuesday 7 August - Ann Siburuth is interviewed about the Resettlement Camps in North Manchester and tells of the story of the people of wartime Kresy.

Broadcast on 6 and 8 August - Jane Rogoyska meets Polish people who were exiled to Siberia as children by Stalin and their descendants.  The changing winds of war took them from Siberia and Kazakhstan to Uzbekistan, Persia (now Iran) and onto India or Africa - then to Britain. They thought that Britain was another stopping point on their odyssey home to Eastern Poland but they and their descendants are still here.  With the participation of Kresy Family members.

The Odyssey of General Anders' Army

Listen to the radio program by Monica Whitlock by clicking here

By the summer of 1940, a quarter of a million Polish prisoners of war had already been sent to Soviet prison camps. More than a million civilians deemed undesirable by Stalin were packed aboard cattle trucks to the far east of the Soviet Union. Many died on the journey, many more would die in the harshest conditions, toiling, starving and freezing on collective farms or labour camps in Siberia, the Urals or Kazakhstan. But then unlikely salvation came with the opportunity to join Anders Army.
Formed in the aftermath of the Nazi invasion of the Soviet Union in June 1941, in a deal brokered between Churchill, Stalin and the Polish Government in exile, this was, on paper, to be an army formed of Poles now held on Soviet soil to help fight the Nazis. Stalin reluctantly released 390,000 Polish prisoners of war and their dependents. Less than half would finally make their way to freedom.
General Wladyslaw Anders, who had languished for two years in Moscow’s Lubyanka prison, fortunate not be shot along with 33,000 Polish officers at Katyn, took command. He remained insistent that as many women and children who could would join this new fighting force. Anders knew this was the last and best chance of escape for everyone.
What followed was a 9000-mile journey to freedom. Thousands died en route before crossing the Caspian Sea to safety in Iran. Orphans found new homes in Isfahan. Large numbers of Jewish Poles - including Menachem Begin, who became Israel's sixth prime minister - left to become part of the fledgeling Zionist army in Palestine. Thousands more fought on as the Polish 2nd Corps in the crucial final battle of Monte Cassino in Italy in May 1944.
By the war’s end, General Anders had gathered 41,000 combatants and 74,000 civilians, and brought them to freedom. But for the majority, there could be no return home to a Soviet-dominated Poland. The majority settled in Britain, others lived new lives as far apart as New Zealand, Kerala and Kenya.
Although this astonishing odyssey has changed the lives of two generations of Poles - and Poland itself - the story is not well known: suppressed in Communist Poland and barely told in the West.

BBC News Magazine - A Polish girl's journey across three continents by Monica Whitlock BBC World Service
Click here to view the article or here to listen to the broadcast.

A STORY OF WAR, OF LOSS AND A FAMILY’S SURVIVAL

is available now from Troubador - for details click here