But soon I could wear them out to play
Who'd a thought I'd still have them today?
When I outgrew them they were handed down
To the next three siblings who didn't want brown

When he came home from working the rails

I look at these shoes and think of the miles
Tricycle pedals and small town styles
Worn at a time when we were all worry free
Before we were five was a great place to be.

I can show my grandkids , but do they care?
Nobody fixes the shoes that they wear.
But maybe someday they will understand
It's not all about style and a fancy brand

I'll tell them their dziadek was Polish and smart
And to repair one's shoes was a resourceful art
They will roll their eyes as I try to impress
So the little Red Shoe Story is just mine, I guess

But I know they were bought and fixed with love
And they are just something I can't get rid of
I just wonder how many kids had shoes like this
That their dad repaired in return for a kiss.

A Hayride and a Jam Sandwich

I'm just posting this for fun.... Looking back at some pictures I took when I visited  my dad's village in Gaj Swiecicki, Poland some years back....One of the local travellers  I met as I stood on my family homestead.... but the hay wagon I can't find .....

But we reminisced and spoke of September 17th.....I’m standing on a road leading to my dad’s village where his life began

A rustic hay wagon stops with a kerchiefed lady and a toothless man.
They ask if we are lost as we look around the fields ripened in gold
I explain my grandparents owned land here but years ago it was sold.

He remembered the homestead but said it had been torn down

I must be barefoot for this experience and didn’t need shoes to walk
They could drive ahead in the fiat or follow clomping horses’ hooves
But for me to have this opportunity I was actually very moved.

What exactly were you taught in your Canadian school?
So I climbed atop the buckboard and searched for a good view
And tried to find a spot on the hay where I wouldn’t sink thru.

And the sweet scent of fresh cut hay wrapped me in the breeze.
There was no time for emotion as I enhaled every breath of the day
I couldn’t have asked for more perfection in this wagon full of hay

The kerchiefed woman handed me something from a small cotton bag

“Would you like to try this?” she said, but I don’t mean to brag
It was a sandwich with a special raspberry jam generously spread
With freshly churned butter on this mornings’ home baked bread
I thought I’d died and gone to heaven, smiling with childhood grace
With the delicious raspberry jam trickling down my face

An amazing feeling came over me because this was my dad’s favorite fruit
In the distance I could hear him laughing that this followed me to his roots
In my fifties, Canadian denim, Chanel, barefoot and laid out on my back
Who’ da thought a trip to Poland would find me a sandwich in a hay rack?

They were just kids and used to play here and picnic with jam and bread
Time had brought many changes and many of their families were dead.

They both sighed quietly and then changed the mood again to laughter.
Saying it’s not all about the war, it’s about what came before and after.

Through time we are all not that different and some things remain the same
Like enjoying a jam sandwich with strangers who didn’t share their name.

Tata, and his underwear!

Tata came from Poland, and was a handsome sort of man
He brought with him his culture to this new promised land.
He was always groomed and polished, with every hair in place
And when he walked, he moved with a special kind of grace.

A day’s work left him smelling of railway diesel and tobacco smoke.
And our kisses on his cheek were met with a scratchy, stubble growth.
But when the day was over and he sat to read the news
His clothes were neatly pressed and he put on polished shoes.

He inhaled his cigarette smoke through a holder with grand finesse
And tipped back his glass of vodka, to relieve the day’s stress.
He would never step out in public unless he took the time to dress
And always added a splash of cologne, if we were having guests.

When Tata died, we dressed him with tender, loving care.
But somehow, we forgot to put on his underwear.
No one would know and that would be our secret to the grave
After all, Tata was a modest man and always very brave.

After his funeral, I awoke from a dream and saw my Tata standing there
He sadly asked, “ Verochka, where did you put my underwear?”
Now you may think this is a joke, but I tell you this is true
And every time I dreamt of him, I asked what I could do.

When Mama got sick, just before she died, she asked to speak to me
And shared with me a special plan, that was sure to set me free.
Before they closed her casket, I placed my gift inside her hands with care
In soft, powder blue tissue was a note tucked inside my Tata’s underwear.

“Please Tat’ forgive my oversight, I tried to do my best,
But today I can know, that finally, you are fully dressed”.

A few days later I was watching sunlight pass through budding trees
As something brushed against my face with a softening breeze.
I looked up to see a powder blue tissue gently dancing in the air
As if to say, “ Verochka, I got your package, and everything was there!”

I tried to catch the floating tissue, as I knew this had to be a sign,
But it willowed back into the clouds embraced by the warm sunshine.
I knew Tat’ would be at heaven''s gate to greet Mama as she arrived
And now this was a blessing wrapped up in a giggling disguise.

I could go to sleep now and dream of my Tata’s happy face
For now the looks of sadness were forever to be erased.
I share with you my wonderful memory and all that is true
Whether you believe me or not is entirely up to you!

And when the time comes that you lay your Tat’ to rest
Make absolutely sure that you do your very best.
If by chance he’s Polish and leaves this earth without his underwear
This will, without any doubt, be your personal cross to bear.

And for all of you who still have a Tat’, kiss him on his stubbled cheek and say:
“Today, I’m wishing you the “Best and Happiest Father’s Day”.

A pair of dusty old work boots sit before my eyes
They belonged to our father when he was alive.
The stiff, brown laces dangle over folds of leather worn
The soles are still intact, just a little bit torn.

They make me wonder of the feet that were once inside
And the miles they walked just so he could provide.
His feet were quite small, I heard an inherited family trait.
He walked his life within a narrow path and held himself straight.

As a small child his feet walked a fair distance just to go to school
They touched the grass of Polskie lasy, swam in creeks clean and cool.
They ran with wild birds, peddled a bike and took him places unseen
And walked the Siberian permafrost after he was nineteen.

They crossed ravaged countries of war and stepped over death
And regained their strength once he was able to catch his breath.
They trudged through man's destruction in bloody, useless war
They wore heavy toiled army boots in Polish 2nd Corps

They crossed a couple oceans and walked a new journey in life
And probably clicked a little jig when he finally found himself a wife.
They got him up in the morning as he faced challenges of a new day
They carried him as he worked his butt off for a meagre railroaders pay.

In the springs pouring rain and winters frozen snow
He had sweats in the summer and sometimes complained of a sore toe.
He had sand in his soles and quite often stinky socks
As his feet did sentry duty in the world of hard knocks

He twitched his toes in times when he had to wait with impatience
And his feet were never fully rested for there was no time for sunny vacations.
And when he was in a hurry his feet hustled with speed
And when he drank too much vodka they staggered indeed.

And he must have had days when he just wanted something to kick
Probably our butts, but he wasn’t that quick.
The music was in his ears and one could see that in a glance
And his feet were thrilled when they could finally dance.

When he broke his ankle he said the rhythms of the dance died
The tunes and feet couldn’t connect no matter how hard he tried.
His feet helped carry us all before our feet learned how to walk
And the journeys they encountered gave him the eyes of a hawk.

As years pass us by we put ourselves in our father’s years
And try to see his world as he saw it, without our sadness and tears.
When relics of old get passed down to the children left behind
We all want what helps cradle the past memories in our mind.

We want to frame those special moments that makes us feel warm inside
So we can revisit those times and feel a child’s love and pride.
Perhaps you need not look too far when searching for your roots
All you really need to do is to look inside your father’s boots. 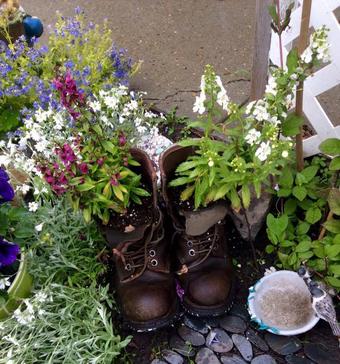 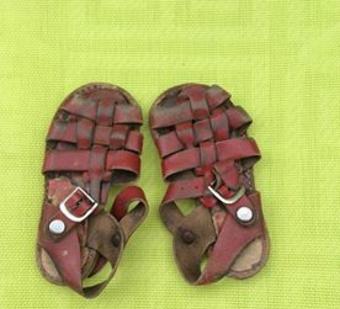