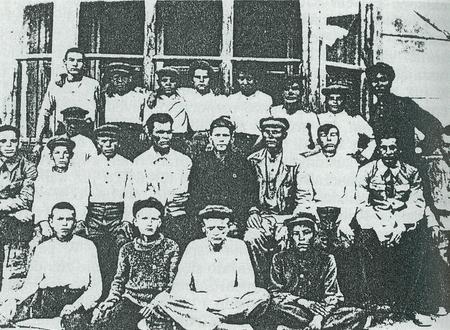 Military settlement Niweck, municipality Dąbrowica, district Sarny, region Wołyń was the official address of our settlement. Through it ran the Wilno-Lwów route from north to south, referred to as road number 12. Plans were also made to put a hard surface on the road from Sarny in the south, but the war interrupted this work[1].

The settlement numbered 15 settlers: two Żelaziks – Bolesław and Stanisław, who were legionnaires from Marshal Piłsudski’s First Brigade. The rest were volunteers during the war with the Bolsheviks in 1920.

The plots ranged from 28 to 32 hectares, depending on the quality of the soil. The soil was suitable for rye and potatoes, so that was cultivated. The settlers started from zero, although the government helped, exempting them in the first years from taxes and assisting in the purchase of seed, farm machinery and pure-breed livestock. Since this was not enough to get by, entrepreneurial settlers tried to find ways of creating additional income, such as horticulture, the creation of orchards and even the establishment of small enterprises such as the production of circular concrete casings for wells and roof tiles. They also bred sheep for wool and Karakul pelts, set up apiaries and constructed frames for beehives that replaced the old primitive and uneconomical ones [2].  Others looked for jobs for additional income, like my father Bolesław Żelazik who as a politically trustworthy man with a good knowledge of the local area, was offered a very responsible job in the construction of earth and concrete fortifications in the east with Works Management No. 13 (Kierownictwo Robót No. 13)[3]. Men formed Agricultural Circles (Koły Rolnicze), their wives Village Housewives Circles (Koły Gospodyń Wiejskich). Both these associations created reciprocal education projects to engage the Belarussians and the local people in learning, with the aim of raising their standards of living, hygiene and education. They organised courses for housewives, reading rooms, games and dances for the young and courses in agriculture and animal husbandry for farmers. Slowly the hairy pigs looking like wild boars, began disappearing, as did the dwarf cows and poultry. Purebred pigs, cows and poultry appeared. All this came slowly, as every change does when it is something new and unknown.

The land which in the past belonged to a family estate, was divided into plots and their brick manor house [4] earmarked for a school, but at first settlers’ families lived there. After houses were built the manor house was returned to serve its assigned use as a two-class school. The first teacher and director was Edward Chlebik. Mr Chlebik participated in the 1920 battles. Mrs Janina Kalinowska who taught there too had participated in the defence of Lwów.

Mr Chlebik, besides his teaching responsibilities, took a personal interest in the local children. Seeing the state of the nearby village he organised within the framework of school activities, the cultivation of vegetables, especially those not known to the local peasants: tomatoes, radishes and various beans, using these crops to supplement the diets of children during school breaks. This also served to spread the popularity of these vegetables among the local population.

The school’s catchment area included two villages: Niweck and Hrycki. Niweck was an agricultural village. In Hrycki, generation after generation made various kinds of wheels for wagons, selling them mainly in markets and fairs.

The teacher, Mrs Kalinowska was an experienced member of the POW (Polska Organizacja Wojskowa or Polish Military Organisation) [5]. She organised a female POW from the surrounding villages and when the children of settlers were older, she formed a group of Cub Scouts. A few years before the war the school turned out to be too small. Land was acquired and a new, four-classroomed school was built with the co-operation of the settlers and within the framework of the Public Works, with material my father obtained from Count Broel-Plater’s private woods. A third new teacher arrived. The new school served as a summer camp for the children during school holidays. Pre-school children were looked after by students from the teachers' seminary. They received a hot meal for lunch and sandwiches in the afternoon. During vacations I was glad to help and it gave me a great deal of satisfaction. Zosia Duda, a student of the Village Housewives School, took charge of the kitchen.

The settlers were members of the Settlers’ Circle (Koło Osadników). The first president was Mr Chlebik, then my father, Bolesław Żelazik. Settlers’ wives belonged to the Village Housewives Circle. The first president was Mrs Joanna Chlebik, then my mother Zofia Żelazik. I remember two courses the Housewives Circle organised: preparing processed meats and making preserves from fruit and vegetables. At this time in Poland there was an initiative to propagate the cultivation of soybeans which could, especially in the eastern borderlands area, prevent starvation before harvest time.

The local peasant was rather conservative and suspicious of everything new and only after long observation, would decide what to adopt and how. To speed up this process my father tried to send local peasant youths to agricultural schools so that they could accelerate progress among their fellow countrymen.

The role of a military settler was very extensive. Settlers in the eastern confines also fulfilled the function of defenders, helping the military and later the KOP (Korpus Ochrony Pogranicznej or Corps of Border Guards) against Bolshevik saboteurs. With this goal in mind, an organisation called ‘Krakus’ was formed with military characteristics and possessing uniforms and arms. Military instructors came to train them. Twice a year, with the aim of readiness for battle, shows and competitions took place in professional target shooting, proficiency in the use of weapons (blank ammunition) and horsemanship. In Dąbrowica – a nearby town – this was on St John’s Day and in the town of Bereźnica, on SS Peter and Paul Day.

In the first years, when there were subversive bands of Bolsheviks in the eastern borderlands, members of ‘Krakus’, together with the military, took an active part in capturing them.

I remember this scene: an early morning alarm ordered members of ‘Krakus’ to assemble and shortly after they left on patrol. Father locked all the buildings and ordered us to sit quietly and observe what was happening. We were extremely frightened. Soon we saw a hunched figure running at the edge of the rye field, some horsemen galloped through, we heard gunshots and then all became quiet. They caught three people, one ran away. In time, subversive bands stopped harassing people living near the borders. A different kind of infiltration began. Religious groups began to form. Some suspicious people appeared in the village and put on spiritual séances, with miracles of moving pictures, images and the like. We began observing these phenomena closely. When these groups recruited a sufficient number of people, they purchased land. This was the time when the government began selling land to the small-holder peasants. Barracks were built on this land and members of the sect began bringing in their families. Often members sold their own properties and spent the money on the newly acquired land. This put appropriate authorities on the alert. They began to carefully observe what was happening. Families were grouped in the barracks, led collective lives and worked together. They took their meals in a communal dining area and all the children were cared for in one group. One day the area was surrounded and it turned out these were Russian agents, who had set up a collective farm. A few subversives were caught and arrested but the main leader was not found. The courts divided the land between the peasants who put in some money and the rest was confiscated. This happened just before the war.

Although it looked like there could have been a confrontation, thanks to the fact that the settlers possessed arms, when the Bolshevik army crossed the border into Poland, there was no massacre as in 1918. Nothing bad happened to the civilian settlers either. Rather, when the occupiers settled on our land in a very short time they expelled all the military settlers, deporting them into the depths of Russia, into Siberia.

A list of settlers’ names together with their additional occupations: Edward Chlebik – teacher and director of the school; Duda; Iwaniuk – workshop for the construction of concrete casings for wells and roof tiles and sheep breeding; Kotowski; Krupski; Kuś; Mróz; Małczyński; Stanisław Nieścior – apiary, production of beehives, orchardist; Pawłowski; Samocki; Staniszewski; Stanisław Żelazik – died in the first years of the settlement, left his land to his brother; Bolesław Żelazik – an employee of Works Management no. 13 (the eastern Polish border fortification).

[1] A map from ‘Strony o Wołyniu 1939’ shows improvements to the Sarny-Niweck route ended in Bereżnica, about halfway between the two.
[2] Primitive beehives were scooped out of a log or tree.
[3] Kierownictwo Robót is understood to have been a para-military construction firm which operated in the area at the time.
[4] The manor house was probably part of the estate of the Witold Broel-Plater. The index of names of Polisie landowners in 1929 lists Witold Broel-Plater as having assets in Antonin, Dąbrowica, Mazuliszcze, Niweck, Wieluń, Worobin, Zamorocze and Złole.
[5] According to Norman Davies’ God’s Playground, a History of Poland Volume II (p 282), the POW was an élite secret conspiratorial body designed for diversionary and intelligence operations, formed in 1914 by Józef Piłsudski and associated with the Polish Legion, itself a merger of several millitary and paramilitary groups.  The goal of the POW was apparently Polish independence and the preparation of personnel for the future army.

​Back to Introduction page