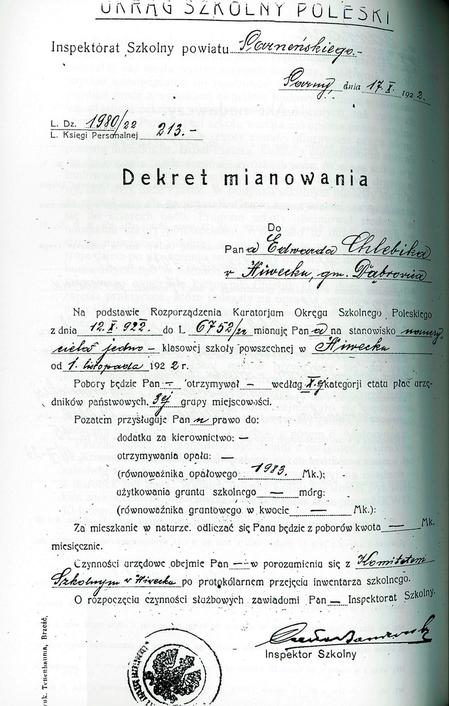 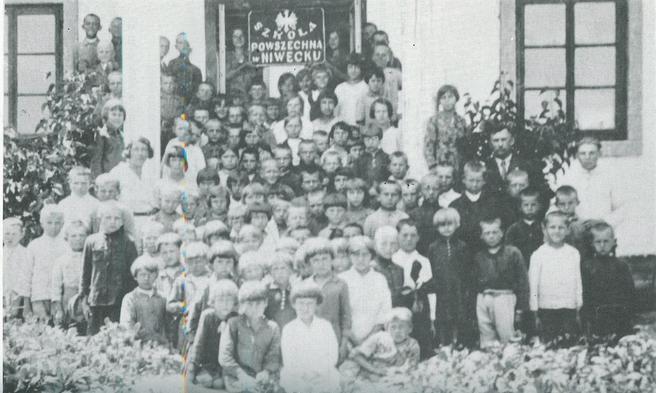 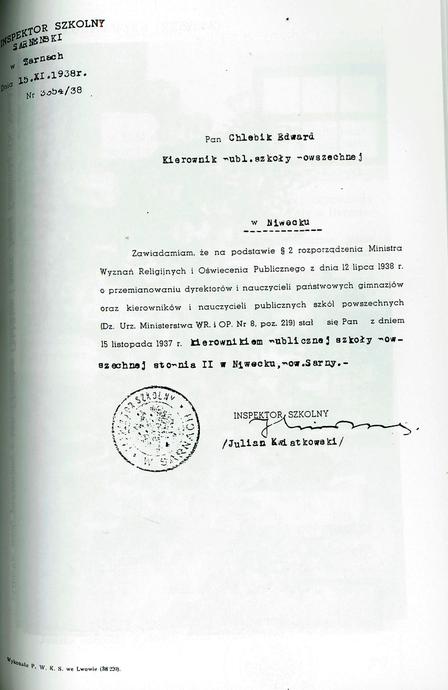 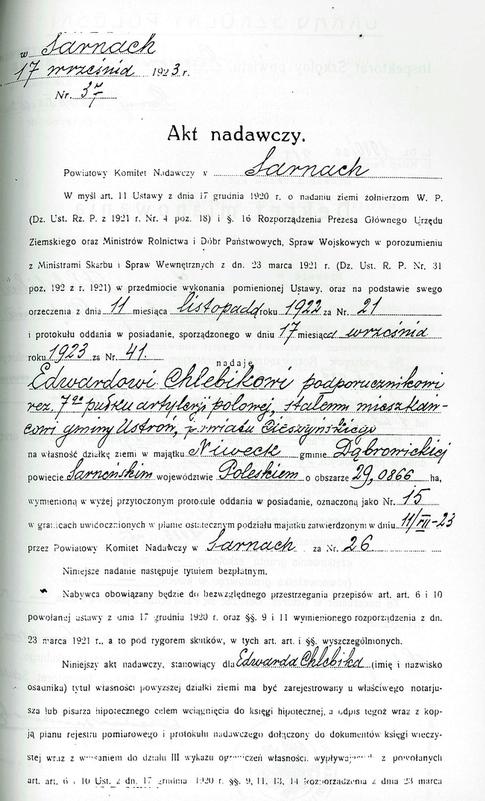 The Niweck military settlement consisted of sixteen plots [1]. They were between 28 to 30 hectares, which had been parcelled out from Count Broel-Plater’s [2] estate.

Some settlers served in the 7th Field Battery (7 p. Baterii Polowej), commanded by Lieutenant Edward Chlebik in the action of 1920 in Wołyn.

The first years were very difficult. The settlers began with nothing – neither implements nor experience – they were all young and not all came from farming families. Despite these difficulties, the plots were cultivated and houses and outbuildings built within five years. The settlers established families and had children, an average of two or three per family. We were two (my sister Wanda, older than me by two years).

In developing their land the young settlers tried to improve the quality of crops and livestock. Their farming practices were of a higher calibre than those of the surrounding countryside. The local peasant was backward, hostile to the Polish settlers and ill-disposed to any kind of progress. In time relations improved, due in great measure to the opening of a school. The one-classroomed school, located within the manor house, began to operate as early as 1922. The founder and first teacher was Edward Chlebik. With increasing numbers of children among the settlers and the recruitment of children from the village, the school grew to two classes and employed a second teacher, Mrs Janina Kalinowska. In 1930 Edward Chlebik was appointed director of the school. He held this position until the outbreak of war in 1939.

When the school building became too small it was decided to build a new school. Since the municipality of Dąbrowica, to which the settlement belonged, did not have sufficient funds, the director of the school obtained a commitment from the settlers and the local population that all work, except the actual construction, would be undertaken by them within the framework of the public works, the so-called ‘szarwarki' [3]. Land was bought by the settlers. Timber was donated by the plenipotentiary of Count Broel-Plater’s property. People enthusiastically took to digging the foundations and transporting the timber. Within the year a four-classroomed school was built. Although the building was wooden the classrooms were big and bright. Within the building there were living quarters for the teachers. The teaching staff increased to four people. The school program comprised seven years’ general education. This demanded a lot of effort from the teachers and good organisation and as a result the outcome was good: three children, after completing the sixth grade, were accepted to the humanities high school (gimnazjum) in Sarny and three to the agricultural school. In addition to formal teaching Chlebik put great emphasis on practical activities such as the cultivation of vegetables and flower gardens. Each class had its own plot where children grew tomatoes, carrots, peas etc. This introduced vegetables to the village.

The settlers established several social circles: Settlers, Agricultural, and Village Housewives (Gospodyń Wiejskich), which largely contributed to the settlers’ cultural life by organising educational courses, parties and theatrical performances. The Housewives’ Circle (Koło Gospodyń) who ran a pre-school in the summer holidays, was responsible for a mobile library and maintained a small first aid kit. The first president of the circle was Mrs J Chlebik, then Mrs Małczyńska.

Looking back, we should be proud of the accomplishments of the settlers in eastern Kresy, achieved in such a short time – because our stay in the settlements lasted less than twenty years – and productivity was high. The outbreak of the Second World War was a great shock, followed by my father’s arrest by the NKVD. On February 10, 1940, the Soviets deported us to Siberia.

My parents died in England (my father in January 1987).

[3] a form of a local tax, entailing a certain number of days work on the osada