The starved and ragged masses of Poles liberated from prisons come to register with the Polish Army. 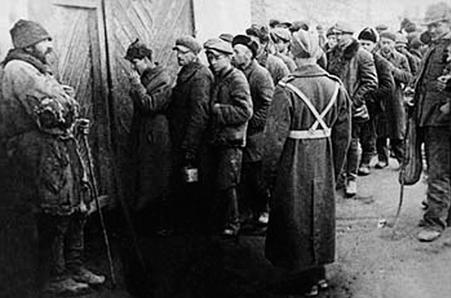 Following Germany’s invasion of Russia on 22 June 1941, an agreement was signed on 30 July 1941 between the Polish Government-in-Exile and the Soviet Union to free all Polish soldiers taken as POWs during the Soviet invasion in 1939, and to form a Polish Army in Russia. However, only a small fraction of the Polish POWs was released. Stalin wanted to use them as slave labour for Soviet production quotas and, later, they were forced to enlist in the Soviet armies.

The growing Polish Army failed to receive adequate food rations from the Soviet Union; Stalin reduced these food rations from 70,000 to 26,000 soldiers. These rations were even more reduced per soldier when the Polish Army began to share their limited provisions with the also growing group of Polish civilian deportees desperate to leave Soviet Russia together with the Army.

In his book, "An Army in Exile", originally published in 1949, General Anders makes several references to "the inadequate food ... the lack of food ... the entire army at Totskoye was without rations ..." (ch.IX); and, again, "the men must be properly fed ... their rations (were) so small that normal training was impossible" (ch.X).

In August 1942, General Władysław Anders, the Commander of the Polish Army met with Churchill to discuss the organization of the Polish Armed Forces and plans to have them evacuated from Russia. After much pressure on Moscow, General Anders secured Stalin's agreement to evacuate the Polish troops through Persia (Iran) to Iraq and Palestine (then under British mandate administration) where they would be equipped and (better) fed by the British. This agreement was mainly due to Churchill's support (in consultation with General Sikorski, Commander-in-Chief of the Polish Army in the West) who stressed to Stalin that troops were needed to protect oil fields in the Middle East.

The rations drawn for the soldiers of the Polish Armed Forces in USSR in principle never satisfied their needs either in terms of quantity or in terms of quality. In the first month of the formation of the army the daily diet of the soldier in the model garrison at Tockoje (Totskoye) comprised soup (millet groats) three times a day of varying thickness and additives (lunch meal). Soon after, as a result of the Soviets reducing the limitations, the notorious problems with operation of the storehouses, the transportation and the quality of the products, the nutritional value and the size of the served portions grew increasingly worse. Each time, there was less vegetable content, fewer fats and less meat and, as a result of recurring shortages of flour there were also difficulties with supplies of bread.  According to the records detailed in the 6th Polish People’s Army Chronicle, the daily ration for each soldier in the first days of December 1941 comprised:

The constant insufficiency caused the more shrewd soldiers to begin to get their own food. Distancing themselves from their units, they made contacts with the locals and were prepared to cover near and far locations. Within Soviet realities, this was no easy feat. However, once good contacts were made, it was possible to organise a surprisingly wide-spread and well-functioning supplies network. In spite of threats of reprisals both from their own (who turned a blind eye despite local pressure) as well as from militiamen and the NKVD, the scale of this operation as well as its effects managed to strike people dumb. “Each morning [it was noted in the chronicle of the 6th Regiment ] tens of chickens, ducks, geese, turkeys, and even goats, sheep and cows were spotted in the bushes”.

In January 1942, after the transfer of the Polish units to the south of the USSR (Kazakhstan, Uzbekistan, Kirgistan), the situation did not improve. The quantities allocated to the Polish Armed Forces (supported by a limited British provision), continued to fail to satisfy the needs of the growing army. The problems feeding the soldiers were intensified by pressure for supporting in a practical way the total care of rescued civilians housed in local kolkhozes or camped with specific garrisons. In emerging circumstances, eg wide-spread shortages of vitamins, serving soldiers were compensated with sorrel and spinach gathered from the fields. Those identified as most needy were fed up with tinned foods, crackers and milk provided by the British (composing the mobilization reserve).  At the beginning of June 1942, the daily ration for a soldier in the 6th Regiment comprised:


The evacuation of the Polish units to Iran brought about a complete change.  The daily ration in Iranian Pahlevi, when compared to the amounts maintained in the Soviet Union, could produce lightheadedness. It comprised:

In addition to this, a small sum of money was paid to each soldier, enabling him to obtain from the numerous local sellers, unlimited purchases of additional foods made tempting by their variety and quantities. Because they were expressed in units of weight and size, they cannot always be imagined; please look at the photos.

At the same time, pictured are the dishes and utensils which the Polish soldiers could purchase. 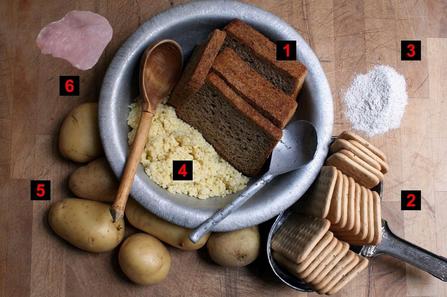 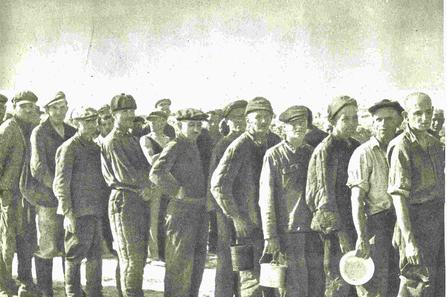 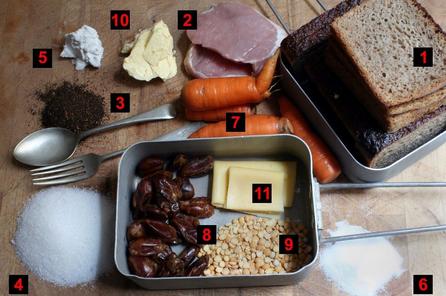