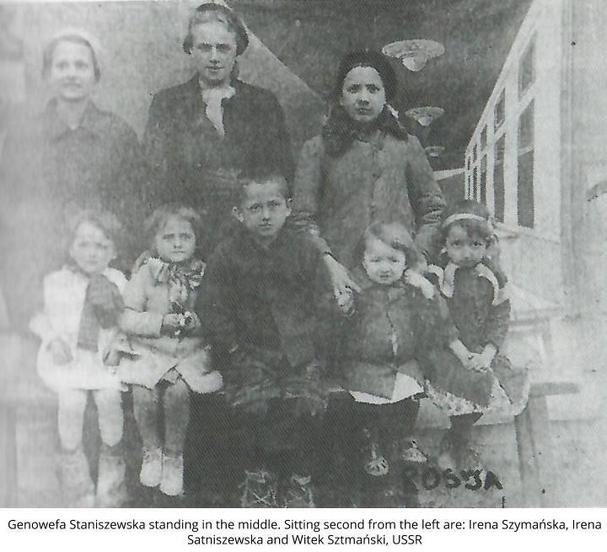 My family consisted of my parents Teofil and Maria Staniszewski and six children, Henryk, myself Genowefa, Zygmunt, Leokadia, Mieczysław and Irena. When we were deported our ages ranged from 2 to 15.

Around 4 am on 10 February 1940 Soviet soldiers burst into our house. They put father and Henryk against a wall with their hands up and told the rest of us to collect our things together, and be out of the house within the hour. All our districts’ military settlers were herded to Kowel railway station and loaded into cattle trucks. From Kowel we passed through Sarny and then ever eastwards stopping every so often to be given bread and boiling water. After three weeks we halted at a place called 109 Kvartal near the village of Khudiakov in Sverdlovsk county. Here in a forest clearing we discovered wooden barracks divided into 14 small rooms in each of which two families were lodged. The only furnishings were a pair of double-decker bunks along the walls and a small brick built stove with two cooking rings. The toilet was behind the huts in the forest.

The men worked in that forest. Some felled trees, others used horses to drag the logs to the nearest rail tracks where yet others piled them on to the low-loaders. Children up to the age of 15 spent the mornings in school, but in the afternoon they were used to clear the forest of the debris of branches which they had to burn. In return for this work they were served with a bowl of soup and a small chunk of bread. Mother’s job was to split logs into 12 centimetre sticks for use as tractor fuel and her payment was also bread and soup. Once a month all the women were allowed to leave the posiolek to visit the nearest village. On these occasions they would decide which of their possessions they least needed – headscarves, shawls, ribbons, beads, and exchange them for bread and milk. Our greatest happiness occurred when parcels from Poland arrived, sent by my mother’s brother Józef Leja.

Once the rumours of the amnesty spread among us, including news of the formation of a Polish army, the young men, including Henryk, prepared to set off first. Soon, however, whole families began organising themselves to travel to southern Russia. That journey took us via Sverdlovsk and many other towns to Tashkent from where we were directed to Dzalal-Abad. On the station at Yangi-Yul we met up with a Polish army convoy, and my brother Zymunt, pretending to be a year older than he was, enlisted with the Cadets.

From Dzalal-Abad, we dispersed to different collective farms near Gombat. Here life was utterly miserable. First of all there was nothing to eat and then, since there was nothing to use to create warmth, we suffered from the intense cold and lots of people died. All the family contracted contagious typhoid, so that we broke out into its symptomatic blotches. As I was not too ill I went from one mud hut to the next trying to exchange petty possessions for food. On one of these outings I was bitten on the right leg by a dog which had broken from its chain. Luckily a passing Uzbek chased the dog away and a friend bandaged the wound in a strip of sheeting dipped in spirit. My misfortune meant I had to sleep with the sick members of my family and so I became infected as well yet, by some miracle or other, we all recovered. It was at this time that my mother, who could hardly walk, sent the youngest two, Mieczysław and Irena, to the orphanage where it was reputed that there was better food.

Generally people lost all hope that things would ever improve, then out of the blue a military vehicle stopped in front of our hut and out stepped a soldier who announced that we were all going abroad. So we travelled to Krasnovodsk. Most of us were so sick and weak we could hardly hold ourselves upright. A few days later we were shipped to Pahlevi where we underwent rigorous disinfecting procedures before being sent on to Teheran.

Whilst in that city my mother discovered Mietek and Irena and took them from the orphanage. She also learned that my father and brothers Henryk and Zygmunt had been posted with the army to Iraq. This meant we could thank God that our entire family had escaped that Soviet hell.

After resting for three weeks in Teheran we travelled on again, this time to Africa, via Nairobi and Kampala to the settlement of Masindi, Camp No. 4.

Here, besides a Technical School of Commerce and dress-making, there were primary and grammar schools. While my sister and I attended the grammar school, Mietek and Irena were pupils in the primary school. From the general store we received dry provisions which mother cooked on the brick stove in our backyard.

At the front of their straw huts most people had beautiful gardens. We, for example, grew bananas, papayas, pineapples and peanuts, as well as a whole variety of flowers. We were often struck down with malaria despite using nets over our beds to fend off the mosquitoes and in our family I was the one most often sick. I became so ill that in 1946 I was sent to convalesce in Fort Portal. I was there at the same time as Bronia Bielińska and Alina Wicher.

We had such youth organisations as girl guides, scouts and cubs in our camp, and I was in charge of over 30 girls who made up the third company of girl guides. We even organised bivouacs and excursions.

We remained almost six years in Masindi, but in June 1948 we went by air to England where after a long separation, we met up with my father and brothers, Henryk and Zygmunt.

Genowefa Kwiecińska has also written about life in Arsonowicze before deportation here. 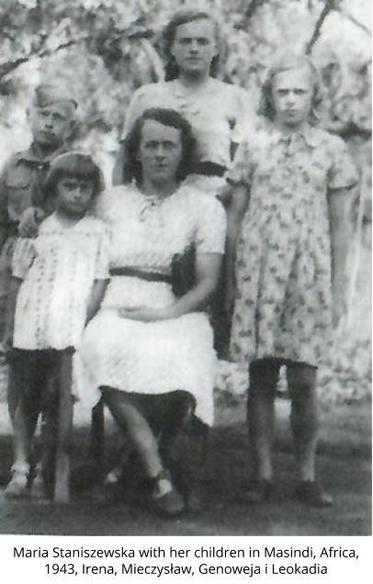