The opportunity for a successful Allied attack against Germany had  passed by the time the Polish Campaign ended. General Alfred Jodl remarked at the 1946 Nuremberg Trial "... the expenditure in ammunition, gasolne, and materiel (equipment) was such as to preclude concurrent German operations on a similar scale in the west or elsewhere" [v], and thus highlighted how British and French inactivity amazed the Germans. The German Field Marshal Gerd von Rundstedt commented on the same inactivity of Poland’s allies  “we were never, either in 1938 or 1939, actually in a position to withstand a concentrated attack by these States together. And, if we did not collapse in the year 1939, that was due only to the fact that during the Polish campaign, roughly 110 French and British divisions in the West were completely inactive as against the 23 German divisions” [vi]. He further remarked that the Polish Army merited great respect. 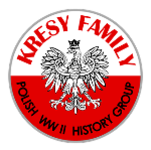 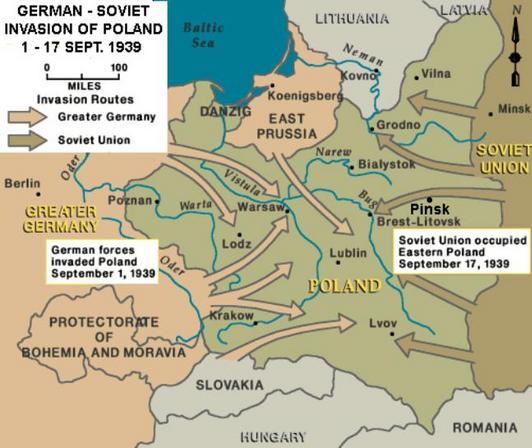 On 17 September 1939, the Soviets in alliance [vii] with Germany invaded from the east. They employed [viii] 24 infantry divisions, 15 cavalry divisions, and nine tank brigades, an estimate of 600,000 troops in all. Germany and Russia supported each other with an exchange of resources, materials, intelligence information and even prisoners. The Poles were now defending their country  against two of the greatest military powers in Europe, if not the world. No other country could have withstood such an onslaught.

On 1 October 1939, Germany and the Soviet Russia divided Poland between them, agreeing new demarcation lines along the River Bug.

At Kock on 5 October 1939 the Poles had to abandon the battle because they had fired their very last bullet.

​Polish cavalry in Sochaczew (bombed by the Luftwaffe 3 September 1939) 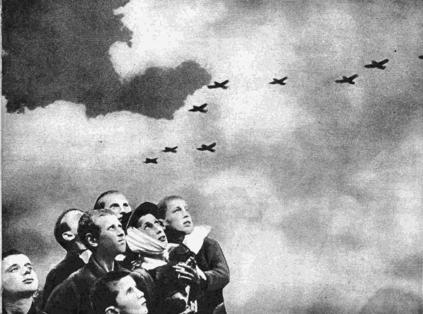 Despite the agreement of 31 March 1939 stating that, should Poland be invaded, Britain and France would attack no later than 16 September, neither intervened. Without support, Poland fought for 36 days and never formally capitulated but continued to fight throughout the war underground as Armia Krajowa in Poland,  under British command in the western front and, later in 1944, a Polish Army unit called Berling's Army was formed in the Soviet Union under Russian Command.

Alone and unaided, Poland was the first of the allies to stand up and fight against Germany on 1 September 1939.

Contrary to popular misconceptions, Poland in 1939, fighting two opponents, Germany and Soviet Russia, made a greater impact on German men and equipment than did the British and French forces in their combined efforts of 1940.

On 1 September 1939, Germany, employing 85% of her forces (1.5 million) attacked Poland from three sides. During the 36-day campaign, the Poles, inflicted heavy losses on the Germans [i] who suffered a total of 16,000 [ii] officers and men killed; 27,278 wounded; and 5,029 missing. German tanks amounting to 217  (25%) [iii] and 400 (almost 20%) of German aircraft of all types were destroyed during the pe­riod 1-3 September. Significantly, in an operation that lasted six weeks, the Germans used eight months of fuel, ammunition and repairs [iv].

Up to the end of October 1939, Polish losses in the east amounted to nearly 200,000 dead and wounded and 200,000 prisoners of war were taken by the Soviets. Polish losses in the west amounted to 66,300 killed; 133,700 wounded; and 587,000 taken prisoner by the Germans. Polish civilian deaths reached nearly 100,000 [ix].  Approximately six million Polish citizens died in WW II; almost three million were ethnic Poles and over three million were Jews.

Although the Allies had nine months to prepare for the French Campaign from 10 May 1940 to 22 June 1940, the struggle against the Germans at a ratio of 3:2 lasted barely a week longer than that of the Polish Campaign where the ratio was 3:1. The Allies had superiority at sea and almost parity in ground and air forces [x]. The 141 German Divisions defeated the 114 French and British Divisions and took 1,900,000 French prisoners amounting to what was almost twice the size of the entire Polish Army.

[iii] Altogether 993 tanks and armoured cars were taken out of action, including the 217 tanks that were totally destroyed and 457 rendered inoperable. The German Campaign in Poland (1939), Robert M. Kennedy [Page 120].

[vii] Stalin and Hitler signed a non-aggression pact, known as the Molotov-Ribbentrop Treaty. Secret protocols of the treaty divided Poland between Germany and Russia after a successful invasion of Poland.