The Polish ex-Service Women’s Association, with its members strewn across the globe, wish to present this report about the contribution of women in the armed struggle during World War II.

We wish to make more familiar, especially to the younger generation, one of the pages of history marked by the participation of women in the Polish Armed Forces in the West.

The Polish Women’s Auxiliary Service (Pomocnicza Służba Kobiet – PSK) was born of a two centuries' old tradition in which Polish women played an active role in the struggle for Poland’s independence from the three partitioning powers: Russia, Prussia and Austria.

The active participation of women, for over three generations, manifested itself through a succession of partitions and uprisings by the passing on of the national spirit, the cultivation of religious, literary and historical traditions, together with the Polish language whose teaching was often forbidden by the occupying powers. Polish women brought up their children in a fervent patriotism, provided assistance to the insurgents, hid and tended the wounded, organised the transportation and delivery of arms – working all the time with the imminent danger of imprisonment or even death. At the beginning of the 20th Century, revolutionary fervour began to sweep Russia. When World War I broke out in 1914 and Polish military units were being formed, women were there to join the various Polish paramilitary organisations that existed in the Austrian partition prior to the outbreak of World War I and, under their cover, military exercises and training were carried out.

Whilst only a few women actually fought on active service during the war, its end brought a new danger from the East for the newly-restored Poland. It was then that the first units of the Women’s Volunteer Legion (Ochotnicza Legia Kobiet – OLK) took an active combat role in the defence of the cities of Lwów and Wilno. In 1922, the OLK was demobilised, its former members not receiving any of the rights awarded to the ex-soldiers, other than being awarded decorations and medals.

Despite the government attitude, the further encouragement and preparation of women for the multitude of military tasks was not deterred. This was facilitated by the various social and paramilitary organisations, such as the Scout Movement, “Sokół”, “Strzelec” and probably, above all, the Przysposobienie Wojskowe Kobiet (PWK).

After much soul-searching, the authorities finally relented and, in April 1938, a bill was passed by the Sejm (Lower House of Parliament) about Universal Military Service which recognised the role of women in the event of war.

In 1935, the Sejm had passed a bill about nursing staff which covered the enrolment on a special register of all staff nurses and nurses of the Polish Red Cross serving civilian and military institutions. In peacetime, they were subordinated to the Ministry of Labour and Social Welfare though, in time of war, the Polish Red Cross and Nursing Service came under the administration of the Ministry of War.

With the outbreak of the war on 1 September 1939, members of the Nursing Service of the Polish Red Cross were at their posts in the military hospitals to which they had been earlier mobilised. After the collapse of Poland, a few of them reached France. They arrived either individually or with their army units, having crossed the Hungarian or Romanian borders. Some fell into the hands of the invading Red Army and were sent to Soviet prisons and labour camps. The overwhelming majority remained in occupied Poland, carrying out their duties in hospitals and tending the wounded and sick.

As a result of an appeal by the Polish Red Cross Headquarters in France and later in Britain, Polish women volunteered to serve in the Polish Armed Forces. All of them, sisters, nurses and the administrative-educational personnel were employees of the Polish Red Cross. They wore its uniform and received Red Cross rates of pay according to the post they held.

3.The evacuation from the USSR and the Polish Army in the Middle East

4.The PSK in Great Britain

5.The PWSK in Italy - the 2nd Polish Corps

7.The End of the War

In due course, outposts (Legations) of the Polish Red Cross were established in the Middle East in Tehran, Baghdad, Jerusalem, Cairo as well as in India and Africa. Polish Red Cross sisters and nurses staffed civilian and military hospitals, medical centres, old peoples’ homes and orphanages.

From 1942 onwards, there followed the gradual separation between the civilian and military centres. 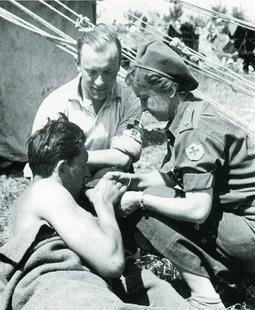 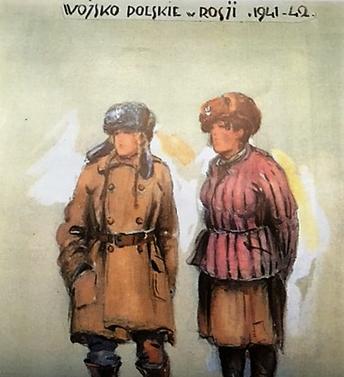 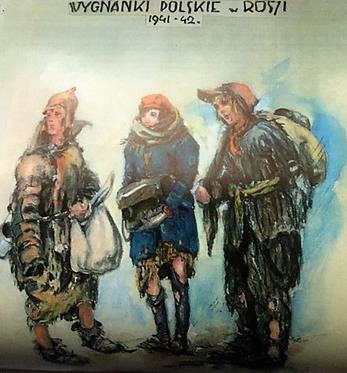 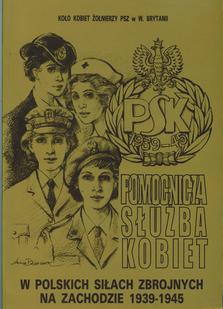