Lt. Krol's inscription on the back of the photograph translates as: 'My adopted son, grey bear "Wojtek" Tel-Aviv, 1942'

But this story is true. It begins in February 1940 when in the first of three mass deportations, Russian soldiers moved families by force from their homes in the eastern borderlands of Poland, called Kresy. These civilian and military men, women and children were taken to the inhuman lands of Siberia for forced labour, and suffered greatly under Communist rule. In June 1941, when Germany attacked Russia, more soldiers were needed to fight, so these imprisoned Poles were released from their camps in August 1941. Recruitment of a Polish army on Russian soil was funded by Britain. Thousands travelled, ragged and starving, over thousands of miles to reach any Polish army camp that would offer them freedom. The path to that freedom would take them over the Caspian Sea to what was known at the time as Persia (today’s Iran). Persia welcomed these beleaguered skeletons of humanity with open arms and food, and gave them back their health, dignity and hope. Several camps were established in Tehran where civilians and Polish soldiers worked together to ensure the survival of those who had endured exile to Siberia, and to establish the base of 2nd Polish Corps under the command of General Władysław Anders.

On 3 April 1942 a group of higher staff officers of the 5KDP 5th Infantry Division, commanded by General Boruta Spiechowicz, met a young Iranian boy. He was holding a miracle in his hands: a little baby bear he had found. An 18 year old civilian, Irena Bokiewicz, niece of General Bolesław Długoszowski, who was amongst the group, was smitten by the childlike bear. Lieutenant Anatol Tarnowiecki (3DSK Polish 3rd Carpathian Rifle Division) was prompted to buy the little bear for her, in exchange for a few coins.

In Gedera, Palestine, on 22 August 1942, Lt. Florczykowski delivered the donated bear to the 2nd Transport Company, which later became the 22nd Artillery Supply Company. The soldiers of this unit welcomed the newest addition to their camp. They bonded immediately, because like the bear, many felt like orphans themselves, having lost their homes and family members. The bear had stolen their hearts. They named the rascal Wojtek, which meant happy warrior: In a sense they were all happy warriors now.

Wojtek was assigned special guardians in the 4th Platoon: Corporal Dymitr Szawlugo and Private Henry Zacharewicz, and later Lt. Piotr Prendyś cared for Wojtek. They shared the little they had in caring for this little bear, and his bond with them developed as he grew over the following years.

At first the bear had trouble swallowing and he was fed diluted condensed milk from a nippled vodka bottle. To help keep him cool in the scorching heat of the Middle East, a hole was dug in the sand and filled with water.

When the 22nd Company moved to Iraq, and then through Syria, Palestine and Egypt, Wojtek went with them. In Gedera, Palestine, Lt. Prendyś quickly set about teaching Wojtek how to be a good soldier, marching next to him in desert heat, training him to salute and wave and disciplining him when he stole from the provisions tent: this was a real army brat! In October 1942, a young  17 year old soldier named Wojciech Narębski joined the 22nd Company - after being told that there was another Wojtek in the Company, he was very surprised to find out that his namesake was a bear. Being of small stature, Wojciech was henceforth known by his army companions as Mały (Little) Wojtek, and the growing bear as Duży (Big) Wojtek.

Wojtek copied all the other soldiers: drinking from beer bottles, smoking cigarettes, and even marching alongside his companions on his hind legs. It should be noted here however, that it was often water that he drank from the beer bottles, and that he swallowed the lit cigarettes rather than actually smoking them.

As time went on, the army was preparing to move to Italy where the Germans had their stronghold in Monte Cassino. The army could not house a pet. The soldiers could not leave him behind. The only way they could take their friend was to enlist him as a soldier. The army complied. So, Wojtek became a Private, with an army number with double rations - but no pay. On 13 February 1944, they all boarded a ship at Alexandria, Egypt bound for Taranto, Italy, soon to begin the biggest battle of their lives.

Wojtek most often rode on a crane behind the driver's cab, leaning against its roof with his front paws. He climbed into the driver's cab at times, but only when the vehicle was at a standstill: having such a large passenger beside the driver would make it very difficult or even impossible to drive the truck.

When the war ended in 1945, returning to Poland wasn’t an option, as Poland had been carved up, occupied by Communist Russia and governed by a communist puppet Government. Twenty percent of Poland’s pre-war territory in the east known as “Kresy” was subsumed into Soviet Russia, the area from which many of General Anders’ Army had been forcibly removed and taken to Siberia in 1940/41. The 22nd Transport Company, including Private Wojtek, was therefore transferred to Scotland.

Upon arrival in Scotland, they were resettled in Winfield Camp on Sunwick Farm by a village called Hutton in Berwickshire. Here Wojtek was free to enjoy the camaraderie of fellow soldiers he had come to love, under the skies of freedom and the silence of an ended war. He continued helping out by carrying logs, crates and rolling barrels – when he wasn’t busy climbing trees, dancing or trying to steal pies! Wojtek now weighed nearly 250 kilograms and was over 1.8 m in height.

One by one, the soldiers made plans to move on, so difficult decisions needed to be made regarding Wojtek’s future. With broken hearts, they knew that the bear that they had come to accept as a fellow soldier and friend, could not live like them. They had no choice. It was decided that the best place to ensure Wojtek’s safety and future wellbeing was the Edinburgh Zoo. With great regret, Prendyś made arrangements to send Wojtek there.

Wojtek was visited at the Zoo by his Polish friends until no Polish soldiers lived in the area. Apparently, the zookeepers put on Polish uniform jackets and learnt a few words of Polish. He seemed very sad and lonely in the beginning, but his keepers did everything possible to keep Wojtek happy and make him feel at home.

Wojtek died on 2 December 1963 at the age of 21 years, having spent the final 16 years of his life at Edinburgh Zoo. A plaque erected there in his memory by the zoo authorities has unfortunately disappeared. At the time, the BBC announced "with regret the death of a famous Polish soldier."

This is just a short summary of Wojtek’s life. A number of books have been written, and films made about him, and memorials in his honour now stand in Poland, Italy and UK. These all demonstrate the impact Wojtek's story has on people, and its popularity and role in keeping the history of Polish exiles and their struggles alive. Links to more information about Wojtek can be found at the foot of this page.

Films and videos about Wojtek

Poem by Hania Kaczanowska: Wojtek can you hear me? 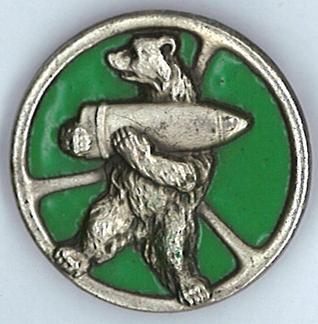 Wojtek with a soldier friend

The daughter of one of Wojtek's Polish

If you've ever wondered about history's heroic animals, just ask a Pole who served in the Polish army of World War II. As the past has faded with time, not many of our veterans are left to tell their story, but some of their children and grandchildren remember. They remember the story that they thought might be a fairy tale. It was a story about a bear that went to war. How is this possible? A bear in the war? Must be a fairy tale or a delusional memory of a soldier who suffered trauma in a horrible war: that’s what many thought. 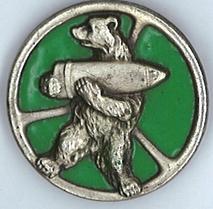 Wojtek with Private Zacharewicz in camp 1946

Walks in the Scottish countryside 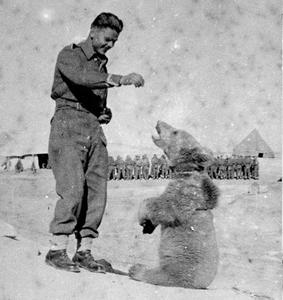 Wojtek’s carers taught him what they knew and as time went on, he grew to understand their Polish calls and commands. As the bond between man and bear strengthened, so did the size of the bear cub. He grew very quickly and had to be chained so as not to run free. The soldiers engaged him in playful sport and loved to wrestle with him. No one feared him and Wojtek thought he was one of them. They taught him to salute when greeted. He became an attraction for soldiers and civilians alike, and soon became an unofficial mascot to all the units stationed nearby.

Dymitr Szawlugo with Wojtek in Italy after the Battle of Monte Cassino. 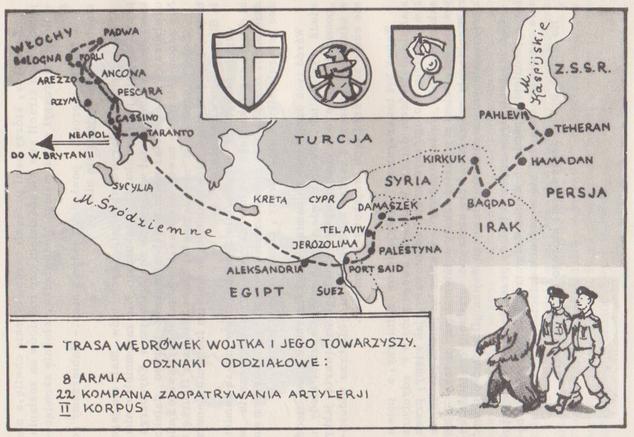 Soldiers hydrating Wojtek on the ship en route to Italy

Wojtek sitting in the driver's cab

Wojtek drinking from a beer bottle