Linder Ladbrooke passed away peacefully in her sleep during the night of 19/20 July at her home in Nottingham.  Linder was one of the original members of Kresy Family when it was formed in 2015.  Even though confined to a wheelchair she supported activities such as hosting the Kresy Family stand at the Who Do You Think You Are? Exhibition in Birmingham in 2016.  She brought materials, books relevant to the Kresy deportations and fulfilled a duty rosta for welcoming and fielding questions from visitors to the stand. She also supported the Group’s work in the early days by helping people in researching their family history.  She shared her experience by producing the first booklet setting out the process and her sources.  The booklet was produced in quantities for distribution at the Birmingham exhibition.  She attended the Kresy Family February memorial dinner at POSK, London in 2015.

Linder was born in Shardlow, England in November 1949, the daughter of Michał Stachnik and Vera Grainger.  She did not know her father due her parent’s separation when she was 2 years old and subsequent divorce.  As a teenager she began to visit him but it wasn’t until after his death that she began to research her father’s life.  She discovered he was born in  Nachaczów in Lwów province, survived Soviet deportation and subsequent captivity in Siberia.  On release from the work camp, he joined General Anders’ Army and served in the 3rd Carpathian Infantry Division, taking part in the training in the Middle East followed by the Italian campaign.

Linder was fully supported by her husband Tim in her interests, research and service to the groups she joined.  She was employed in the engineering tools business that entailed travelling abroad.  Linder was an avid car enthusiast and with Tim built, improved and repaired car engines.  She received several awards in the course of her activities including “Expert lady driver, South Derbyshire Motor Club”. A self-proclaimed “petrol head”, it led to an accident aged 39 whilst stock car racing that left her in a wheelchair.

Linder did not allow this to hinder her ambitions and in 2005 undertook a trip to Ukraine with Tim to see her father’s place of birth and childhood.  She had learnt of three cousins still living in that house which still contained some of his possessions and was determined to see the place for herself.

In recent years Linders health prevented her from continuing active involvement but she remained a strong supporter and tuned into Kresy Family events on Zoom during the Covid lockdowns.  Many who came into contact with her became good friends who treasured their friendship with this remarkable lady who the Chair describes as a force.

The Management Committee offers sincere condolences and sympathies to Tim. 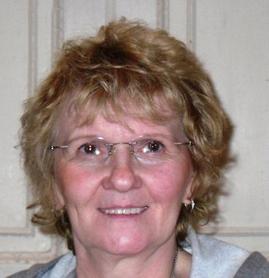