the lands known as Kresy. The daughter of a military settler from Modlin near Warsaw, she was one of four children.

She was deported to Siberia together with her whole family on 10/2/1940 by Russian forces who had invaded Poland on 17/9/1939, she and her family were freed and began a 3000 km journey to freedom via Uzbekistan, Kazakstan over the Kaspian Sea to Persia, present-day Iran. At this stage, her father and older sister had died. Together with her mother and younger brother the family proceeded to Uganda under British Colonial Protectorate, her elder brother having joined the Polish Army in Egypt.

After many years in Koja, a camp in Uganda, mum with her younger brother came to England in December 1948, her mother having died in August that year, to join their elder brother who came to England with the Polish Army via Italy. Mum was sent to a resettlement camp in Ludford Magna Lincolnshire with her young brother, her first job was in Morrells canning factory of Lincoln. At a wedding in Ludford village she met my dad, who was stationed nearby with the Polish Army. After marrying at St Marys Church Louth in 1951 they initially moved to Manchester but eventually settled in Scunthorpe, bought a house in1953 and raised my brother and me.

Mum at first worked on the land until getting a job at Scunthorpe Maternity Home where she worked for almost 25 years. Life wasn’t easy but living in Scunthorpe mostly within the then vibrant Polish community, it was a happy time with many happy hours spent at either the SPK Club in Home Street and later at the Polish Social Centre on Frodingham Road. Eventually, my brother and I married and left home. Mum and dad usually spent all their holidays with family in Poland. Mum loved to cook and baked her famous apple pies.

Dad passed away 12 years ago and mum lived the rest of her life in the family home, until she got her wish and passed away there in her sleep on 10 April 2019.

The end of an era.

Finally, I would like to take this opportunity to thank mum's neighbours namely, Andrea Plaziuk, who styled mums hair every Friday and helped her in the house; and Bob and Margaret Preston who fetched her newspapers, tended to her garden and when I wasn’t available took her to the doctors and shops, your help was invaluable. 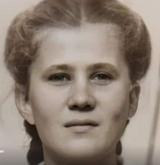 Andrzej with his sister Maria 2014