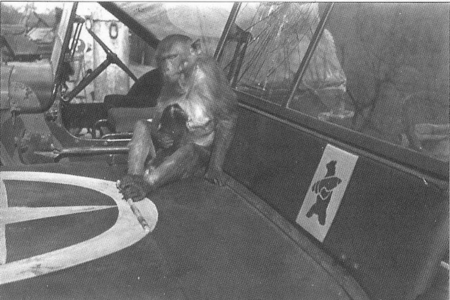 Kasia with her baby in Italy

​12.  Wojtek was the only animal accompanying the 22nd Artillery Supply Company.

According to the an entry made in the Company's Chronicle on 13 September, 1943, the Company had two bears in its  care at that time; Wojtek, and another bear named  Michał. Michał was aggressive, and he and Wojtek fought, so Michał was donated to the Tel-Aviv Zoological Gardens on 24 September, 1943.

In exchange for the gift of the bear, the Zoo presented the Company with a monkey which the soldiers named Kasia.

In Italy, Kasia gave birth to a baby, named by the soldiers as Kubuś.  He sadly lived only a few months. Kasia became ill a short time later and also died in Italy.

​​Back to Wojtek Stories  - True or False? 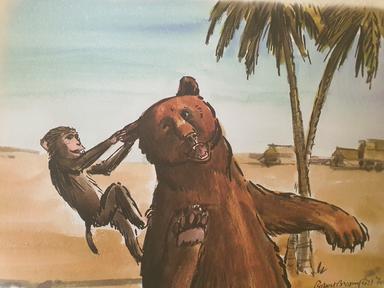 While the Chronicle records the soldiers' initial satisfaction with this gift, it seems that these feelings were not shared by Wojtek! According to Wojciech Narębski (Mały Wojtek), Kasia would jump onto Wojtek's back and bite him. There are also reports that she would pull his ears and that Wojtek would cover his eyes with his paws whenever he saw her approaching.

As recorded in the Company's Chronicle, Kasia and two dogs attached to the company were not able to travel from Egypt to Italy on the MS Batory with the soldiers and Wojtek. They sailed on a cargo ship and were then reunited with the rest of the Company at their camp "Okonon", 10km north of Taranto.