​4.  Wojtek was a heavy beer drinker and cigarette smoker.
FALSE

Wojtek apparently swallowed rather than smoked cigarettes. According to Wojciech Narębski (Mały Wojtek) however, this was not a regular habit for the bear, and Wojtek obtaining a cigarette was sometimes by accident.  There are claims that Wojtek would only take them if they were lit first, but this cannot be confirmed. 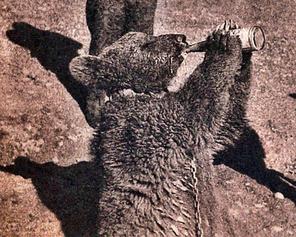 Wojtek did enjoy drinking beer, but more often it was water and sometimes tea that he drank from beer bottles. Beer was also rationed to only 2 bottles per day, and it would take a lot more than that to make a large bear drunk.

Archie Brown, who served with the 8th Army Signals HQ, laughs off the suggestions that Wojtek used to smoke and drink beer, "He wasn't the pub drinking, smoking, circus animal they are trying to make out," he says. "The beer bottles he drank from were filled with tea."