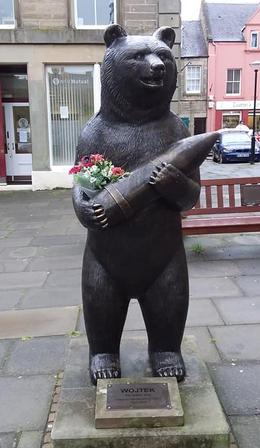 Although the image of Wojtek carrying an artillery shell became the insignia of the 22nd Artillery Supply Company [see above] and he is also portrayed in this way in a number of statues that have been erected in his honour, Wojtek did not carry individual mortar shells, nor did he engage in active combat. He was never on the battlefield, but stayed at the 22nd Artillery Supply Company’s base camp at Venafro, about 30 km east of Cassino.

The bear was a much-loved companion, and the soldiers would not have endangered his life in this way.

Consistent with this are the recollections of Wojciech Narębski (Mały Wojtek), who writes, "Wojtek was a really very polite and well-educated animal and our really great mascot and friend but, nevertheless he had to be always under the control of his 'foster-father' Piotr Prendyś, an older soldier of our unit, who did not drive a truck but stayed with him in our camps. Usually, when we were in a  camp, he wore a chain on his neck, to be guided by his Polish 'father'."

​10.  Wojtek carried mortar shells on the field of battle at Monte Cassino.

"In the Middle East (Palestine, Iraq, Egypt) and during the Italian campaign, all the drivers (like me) had so much to do that we only met Wojtek at the beginning of our workday and when returning, usually very tired, after our often dangerous tasks. In the meantime, Wojtek was under the control of our friend Piotr who stayed with Wojtek in the camp. Therefore, the contact of other soldiers (like me) with Wojtek during the war period was rather short but very important."

Back to Wojtek Stories - True or False?