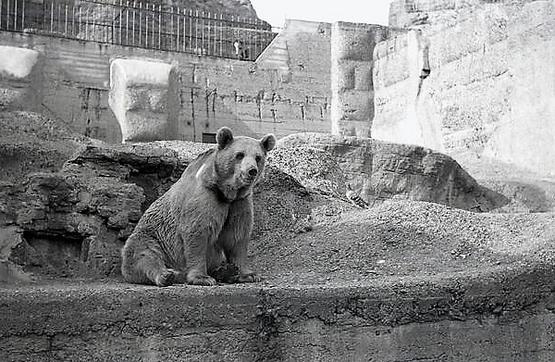 ​14.  Wojtek did not receive adequate care during his years at Edinburgh Zoo.

According to Aileen Orr, author of Wojtek the Bear: Polish War Hero, who also played a key role in the establishment of the Wojtek Memorial in Princes Street Gardens in Edinburgh, Wojtek was very well looked after at the zoo. She feels that it would have been good for Wojtek to have been in a park rather than in an enclosure, but that situation did allow him to be closer to visitors, enabling human interaction, which was what he knew.

The zoo staff caring for Wojtek worked hard to keep him happy - they even wore Polish army jackets. Early in his time at the Zoo, Wojtek was visited by his Army companions, and visibly responded to hearing spoken Polish. Wojciech Narębski writes that at least on one occasion, a former soldier climbed into his enclosure for a bout of wrestling with Wojtek, and that his army mates were also known to throw him lit cigarettes. These visits became less frequent as the men moved away.

Aileen Orr adds that Wojtek was sadly very arthritic at the end of his life. He had never hibernated, and his joints had deteriorated greatly as he was by then a very large and heavy bear. This is confirmed by Wojciech Narębski who writes that Wojtek needed heat lamps in winter as he suffered from rheumatism. According to Professor Narębski, Wojtek became more and more sluggish and cranky towards the end of his life, and stopped going out to the people who visited him at the Zoo. When he needed veterinary care, including injections, the Zoo staff would ask for one of Wojtek's Polish friends to come and speak to Wojtek in Polish and persuade him to come out of his lair and undergo the required treatment.​​​​​

​​Back to  Wojtek Stories - True or False?