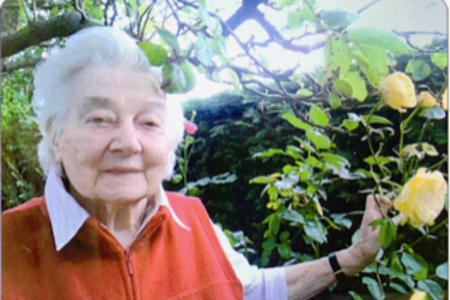 In 1939 at the start of the Second World War, the Russians occupied Eastern Poland. Within a month her father was taken away by the NKVD for a “few hours”.  His family never saw him again, nor found out where and how he died.  In February 1940, Zosia, Oleńka and their mother were packed into cattle trucks and taken to a primitive Arctic lumber camp in Russia.  Her mother's ill-health resulted in Oleńka being the main breadwinner but she struggled badly with the hard labour. With characteristic determination she quickly learnt Russian and counting on an abacus, became an administrative assistant.

In 1941, an “amnesty” was declared but it took over two months travelling by raft and train for Oleńka, Zosia and their mother to get to Uzbekistan where the Polish army was being formed.  Initially, they were assigned to a village where there was famine and typhus her mother died there, aged 48.  Conditions improved on joining up with the army and she looked after children in an orphanage.

In April 1942, Oleńka and Zosia crossed the Caspian Sea with General Anders’ army to the safety of the Polish schools in Isfahan, Iran which became home to over 2,000 Polish children. After 3 years, she enrolled at the American University of Beirut.  In 1948, Oleńka left Lebanon to join her brother Janek in the UK, and continued her university education in Liverpool. She met Olgierd and they married in 1950 moving to Oldham where he worked as a GP. Their children Ewa, Leszek, Danek and Helena were born and grew up there.  Sadly, Ewa died suddenly in 1982 but Oleńka immediately focused on how to help the grieving families.  In 1998, she and Olgierd moved to Hazel Grove where Oleńka became his carer for the last few years of his life - he died in 2008.  Oleńka was hugely enthusiastic about supporting the Polish community in Oldham and Manchester.  She was especially passionate about the Polish Saturday schools and the Oldham girl guide troop “Świerki”.  Oleńka gave interviews and wrote articles about her wartime experiences, including chapters in the award-winning book is “Isfahan, City of Polish Children”.  She had a remarkable zest for life, latterly relying on the internet as she gradually became housebound.

Oleńka was always greatly interested in people, wanted to help and support anyone in need.  She lived in an independent life to the very end.  Oleńka died on the 4th August 2018, leaving behind a large family including seven grandchildren and two great-grandchildren .

Alexandra Rymaszewska (Jarmulska) was born in Nowy Targ, Podhale on 15th January 1924, second youngest of five children.  When her father, Kamil, retired as a forestry specialist he and her mother Natalia (Lechner) moved to Sarny near the Russian border when Oleńka  was seven years old and Sasha her sister, four.  She limped badly as she had been born with a dislocated hip joint but rapidly learnt how to be resilient. Joining the girl guides greatly improved her confidence and provided her with life-long friendships and the principles she held dear throughout her life.  She was given responsibility for maintaining the archives of her guide troop and dreamt of becoming a journalist. 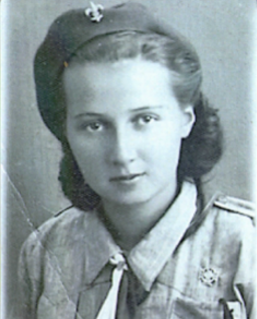