Then there was the threshing of grain with flails, but as I remember, there was the so-called treadmill. It was a machine in the yard, which was turned by a walking horse. The treadmill worked more efficiently and faster. I just felt sorry for the poor animal.

We didn't have many toys, but we enjoyed everything we got. I remember on the feast of St. Nicholas (Św. Mikołaj), finding gingerbread biscuits in colourful, shiny paper under my pillow.

We ate the gingerbreads and put the wrappings in a book to smooth them out for making Christmas tree decorations. We made them ourselves. In our family, the older siblings did this, but I also had something to do - making straw toys, clowns out of blown eggshells with colourful caps, paper baubles known as hedgehogs and chains of coloured paper. To the delight of us children, they also hung sweets, tiny biscuits and even colourful apples on the tree. The Christmas tree was dressed early on Christmas Eve in secret from the children who would see it for the first time for the Christmas Eve celebrations.

There was no agricultural machinery. Ploughs and horse-drawn harrows were used to cultivate the fields. Cereals were sown and potatoes and vegetables were planted by hand. Scythes and sickles were used to harvest cereals. Workers from a nearby village were hired to work in the field and grow vegetables. Even today, after 80 years, I remember how working women sang wistful Ukrainian dumki. I really enjoyed listening to them, and I still remember one. 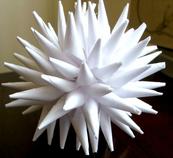 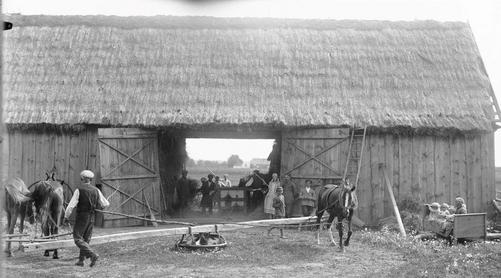 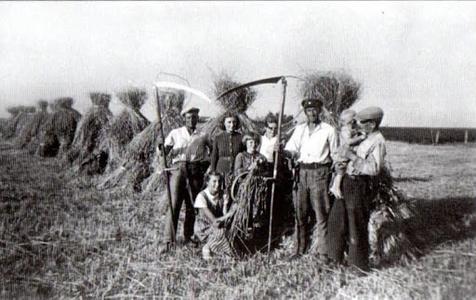 Fate dictated that both families end up in the same place. Stanisław and Ewa met and in 1922 they got married in Kołodno. They arranged a loan and bought land in the district of Krzemieniec near the village of Rześniówka. In total, 14 settlers bought plots near this village.

Their beginnings were very difficult because they started from scratch and without any support. However, they did it. They built a house and outbuildings: a barn, a stable, a cowshed, a pigsty and a henhouse. All the buildings were thatched. Fortunately, exploratory digging located spring water that enabled them to build a well.

It is difficult to describe the life and work of people a hundred years ago when living in the present. Perhaps it is best described with one word: primitive. Instead of a tap, water was drawn from the well with a bucket. For cooking there was the so-called plate; for baking bread, an oven fired with wood and less often with coal; for heating - a tiled stove. The water for washing had to be brought from the well first, heated on a plate and washed in the tub with a washboard. Not like now - fill the washing machine and press the button.

Twice a year, in the autumn and spring before Easter, a pig was slaughtered. Then the kitchen was transformed into a butcher's shop. Homemade methods were used to make all kinds of cold cuts (I have never eaten such delicious black pudding as then), meat and bacon were preserved. Greaves (skwarki - fried pork fat) were often used to season dishes, and my father liked it spread on thin slices of bread. Back then, they didn't know about calories or cholesterol, or they just didn't care. It was believed that whoever worked hard must eat well. Butter or lard, less often oil, were mostly used for cooking and baking.

A very busy time working in the field and at home was diversified by various family socials and sometimes productive meetings. For example, after killing a goose, it was plucked and the feathers kept until a few ladies gathered in winter and tore out the down. With the tough parts removed the down was used for pillows, duvets, or sold. There was a lot of singing, jokes, laughter and scary stories. (The houses were lit with kerosene lamps but it was very dark outside. Outside you had the feeling that something dangerous was lurking behind every corner.) On these occasions, one of the young girls would read a book out loud whilst the working women listened. I am very grateful to my mother because she not only introduced other adults to books, but she still managed to find time to read to us every day despite all the work on the farm. Probably it was then that I became hooked on reading and to this day I love books, it's my favourite activity.

Each farm had to be self-sufficient but also had to set aside enough produce for sale. The money was needed to pay off loans, taxes, various fees such as schools, doctors or vets. You had to pay for everything you couldn't make yourself, such as footwear or warm clothes for winter, kerosene, salt or even a sewing needle. Not to mention the fact that misfortunes could happen - storms that destroyed the crops, death of livestock, mechanical failure or, worst of all, disease. The latter affected my parents. I only know of this fact from stories. It could have been 1934 or 1935. My healthy and strong father suffered a terrible headache. I mentioned earlier that as a young boy he was wounded in the head. It was initially thought that these pains were related to the old wound. After more careful examination in Krzemieniec, it was found that there was a tumour in his head that had to be removed. We had to pay for the operation but did not have such savings. My parents were forced to sell a piece of land that was very valuable to them in order to finance a fortunately successful operation.

These were the kinds of concerns and worries faced by my parents. My early childhood was carefree and wonderful. I had three older siblings: Stanisława, Władysław and Helena, and a younger sister, Danusia. We had loving, caring parents. We were healthy and happy.

I went to school when I was six, but my older siblings had taught me to read and write earlier, so I was bored with the seven-year-olds who started from A and B. I loved singing lessons and as a little girl I had a very good ear and voice. However, I was a baritone and this amused a lot of adults. I couldn't sing along with the other children and I suffered a lot because of it. Luckily by the time I was nine my voice had changed from baritone to a soprano. This made me very happy.

I have a few nice memories from those years. Early in the morning the song of the lark. I really liked the fields of grain that were much taller than me. I was left with a fondness for poppies, cornflowers and all field flowers, which I loved to pick. The strong honey scent of buckwheat, fruit trees covered with flowers, or ruby ​​cherries, which were used to make delicious preserves, juices and liqueurs. At the beginning of autumn when potatoes were dug, I remember the smell of burning stalk fires and potatoes baked in hot ash. I remember harvest time when the fields were swarming with workers mowing, tying sheaves and harvesting grain. I was fascinated to see how women used sickles in places where the scythe couldn't reach. One day (it was probably in the summer of 1939), when the workers went to dinner, I ran into the field, found a sickle and tried to reap myself. It ended with a severed finger! To this day, I have a memento of this adventure - a crooked nail.

It was on Christmas Eve that angels brought the tree and left us presents, under the tree. The adults were extremely busy with the preparations, so children were told to behave because anyone smacked on Christmas Eve (it was allowed at that time) would be smacked throughout the next year. According to tradition, there should be 12 dishes for Christmas Eve dinner. Everything was made at home, so the preparations took several days. After all, not only Christmas Eve was celebrated by parents and children, but also Christmas Day when other family members visited and had to be accommodated.

Each farm diligently stocked supplies. Vegetables and fruits were seasonal. The excess was bottled. In winter, potatoes, carrots, beets, onions, cabbage heads and sauerkraut were stored. Cucumbers were also pickled. However, we had to buy many products, such as coffee, tea and cocoa (which was usually only for Christmas). Normally, children drank milk or water.

Years passed. The settlers in the Borderlands starting with nothing performed a real miracle. These were people who were hardened by the difficult conditions but entrepreneurial, hardworking they loved the land with a passion. Those born when Poland was under foreign rule and control also loved the freedom they regained after the First World War in 1918. They improved farms, built schools, churches and community centres. They formed various organisations, unions, to help each other. Older children, or rather young people, were sent away to study or to vocational schools. The future was viewed with hope and optimism.

Back to Contents page