We stood on the deck all afternoon and all night as there was nowhere to sit. Early next morning, the ship dropped anchor some distance from the port, and some barges came over and we were taken ashore. It was the port of Pahlevi, [Ed. note: renamed Bandar-e Anzali] Persia as it was called then (now Iran). Not far from the port, right on the seafront was a sort of transit-cum-quarantine camp and we all spent some time there.

In one corner of the camp were three tents pitched together. In the first tent, we had to undress and throw all our clothes out, then every bit of hair on our bodies was shaved off. In the second tent, we had a shower and in the third tent, we were issued with new uniforms. After about a week or so in Pahlevi, all the boy-soldiers were driven in open-top lorries to Tehran aerodrome, and there we were put into a huge hangar which we occupied for three weeks.

Nearly every day for dinner we were given tomato soup with rice, a piece of mutton and some white bread. It all tasted so good. We were also warned not to eat a lot, because we could become ill after such a long time of near starvation. Then one day orders came to be ready to move out. Early the following morning some open-top lorries arrived and we clambered aboard with all our belongings and the next part of our journey began.

Soon after leaving Tehran we were travelling through the mountains. I remember in one place I looked down to the left and it was a sheer drop, and I could not see the bottom – on the right was bare rock. We travelled all day stopping occasionally for a few minutes. We spent that night at a transit camp at the foot of a big mountain. Early next morning after breakfast we were on the move again. Soon after leaving the camp we were travelling through the desert. It was dusty and very hot, and there was no proper road just a dirt track. As we went through a small Arab village people started throwing oranges into the lorries. I caught one and as I was very thirsty I thought I would enjoy it, but when I peeled it, it was all dry inside. What a disappointment!

Our next stop was a very big transit camp on the shores of Lake Habbaniyah, not very far from Baghdad in Iraq. It was hot, so very hot, that between ten in the morning, and four in the afternoon we were not allowed to go outside without a headcover. Even when we went swimming it was after four o’ clock.

It was during the second week of our stay by the lakeside that one afternoon the sky turned a dusty brown colour. A sand storm was approaching. We were ordered to stay in our tents and then the storm hit the camp. We were holding onto the tent posts and everything else trying to stop the tent from being blown away. After about half an hour it was all quiet again, but the sand was everywhere.

It was now the beginning of May and one day an order came to be ready for another leg of our journey. Soon after a fleet of old buses arrived, we clambered aboard and were soon on the move again, travelling through the desert and as far as the eye could see there was nothing but sand. A few hours later black stones started appearing on each side of the road – as before, there was no road just tyre marks in the sand. After a while there was hardly any sand to be seen, only black stones. We were travelling through what I believe is called the “Black Desert” [Ed. note: part of the Syrian desert]. Mile after mile of black stones everywhere. Eventually, there was sand again and we stopped for the night in yet another transit camp. Early next morning we were on the road again. Sometime later we spotted another sand storm heading our way. All our buses stopped and formed a circle with engines to the centre of the circle, and there we waited in the middle of nowhere until the storm blew over.

or Back to Contents page​ 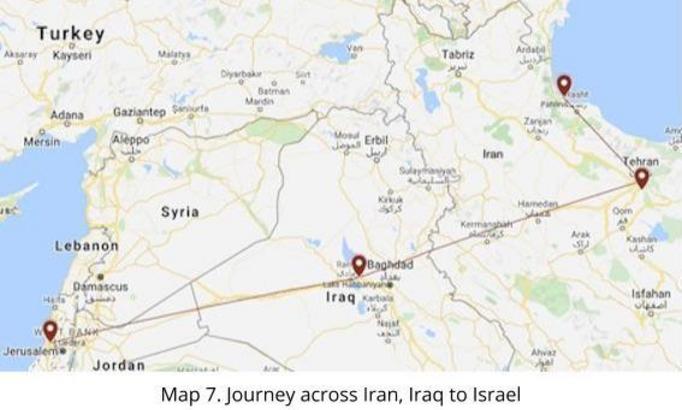