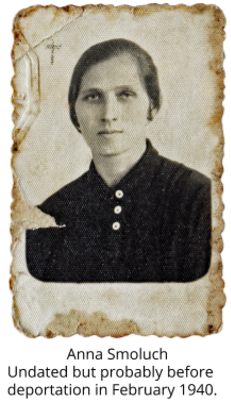 Over 75 years ago, Maria Smoluch as a 17-year-old girl wrote of her experiences and events in a notebook.

The original notebook and its contents are shown below as a video to provide a better understanding of its size and condition after so many years. The translation follows.
This was in a period of time after the deportation of the family, by the USSR, from Poland to Siberia.

At the time of writing these notes the family had already suffered the hardships of the journey to Siberia, of life in Siberia, and finally of the journey from Siberia to Iran.  These recollections are from a time - March/April 1942 - when the family has travelled across Siberia, crossed the Caspian Sea, and has just arrived in Tehran. 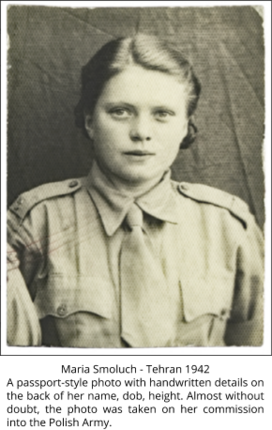 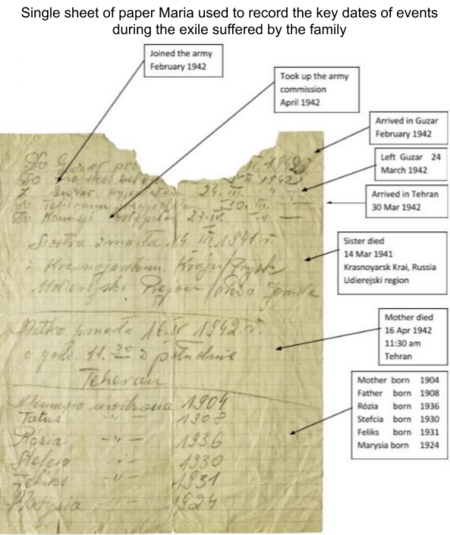 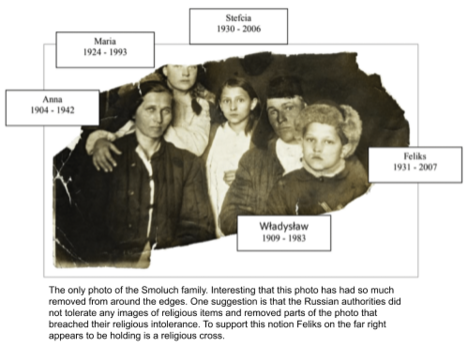 Maria's mother Anna Smoluch died in Tehran very shortly after the journey across the Caspian Sea, a journey which was the end of that period of exile in Siberia and the beginning of their freedom.

Unfortunately, she was one of many exiles who did not manage to survive the hardships of the journey out of exile. Anna lies at rest in grave 37, row C, Section II of Doulab Cemetery.

Doulab Cemetery is the largest burial place of Polish exiles in Iran with over 1,900 graves. 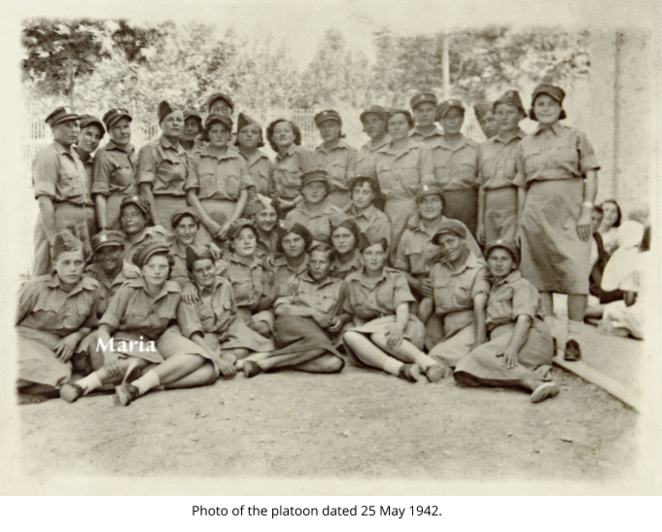 During the family's time in Siberia, Maria's youngest sister Rózia died at the age of five.
The only photograph (below) of the Smoluch family from that time shows them in exile but Rózia is already missing from the photograph.  On reaching Tehran Maria is now facing the most difficult time in her life as her mother, Anna, is seriously ill.

Morning 23  March (1942). Father arrives and tells us with emotion, that we are leaving .... This affected me greatly .... what will become of my brother? Surely he will remain. With an aching heart I accepted this piece of news, which we dreamed of in frozen Siberia and in southern Uzbekistan. Finally, God has granted that we should live and await such happiness, to journey across the border. But what will become of my brother?

24 March Tuesday. At night we departed from Margilan, Uzbekistan [or was it from Guzar, Uzbekistan]. We arrived at the Caspian Sea on Saturday the 28th. It was the last time that the Soviets hosted us on their land, receiving us with a good dinner. We are finally in the port of Krasnovodsk. In front of us is the sea and the mountains. In the evening, we sat on a huge cargo ship where several thousand soldiers and civilians were accommodated. A prolonged strong sound of the ship’s horns put all of us on our feet. Finally, after several hours of waiting we set sail. The ship shuddered slightly. The motion of the motor sounded and suddenly the pier, the shore, the city and the empty inaccessible mountains began to slip away from before our eyes. Finally, we are leaving this country where we lived so many terrible days, where in distant Siberia I dreamed of a free Poland, which, it was said, we would never see again. But all of this has been consigned to oblivion. I stand and look at the swaying waves and my eyes are fixed on the distance, where my sister remained (in Siberia). Oh God! Why did you separate us? Why did you take her to yourself?  My brother, mother, father are here, but my sister is not. She remained far away over there in Siberia, sleeping a deep sleep, but it is hard!

In the afternoon, we left by car beyond the city to the camp, and there I was separated from my parents.

28 March.  They loaded us into cars and drove us to the capital of Iran. From the port to the capital was a 300 km journey in a truck on a terribly shaky road. We drive through the mountains, along roads winding over the precipice, wonderful gorges disappearing from sight before our eyes. Somewhere on a bend appears a precipice and across it spans a bridge, my heart simply dying of terror. But, nevertheless, we are delighted. Wonderful views fill us with terror, but at the same time, we are fascinated. The landscape is beautiful, a wonderful land. Finally, after so frightening and exhausting a journey we reach the end.

30 March. At noon, we drive into the capital. The entrance was magnificent. We were greeted by the local people with great joy. The city is beautiful, wonderful buildings, shops, displays, everything filled us with excitement. People all elegantly dressed, in taxis, on balconies, in one word all happy with their lives. At this moment, I thought with bitterness that, for 2 years, people here are enjoying and making the best of life, well-dressed and happy, whilst we Poles were perishing in Siberia in the far north, in the frozen steppes, living in camps. To live, everyone trembled over each piece of bread. Whatever one had was exchanged, to live and not to die of starvation. These youthful years sailed by with a terrible longing for our homeland and freedom. But thank God we recovered whatever we shared, and dreamed in the golden dreams of youth. Once again we find ourselves in the swirl of another life. We drive through the bustling streets of Tehran, people everywhere rushing to look at what these Poles look like? From all sides you can see friendly faces and hear the shouts of welcome. Before the camp, charitable people met us with a variety of gifts and all of it was thrown onto the vehicles. We drive into the camp. There are several large buildings, hospital vehicles, all surrounded by a high wall. Large gates guard the entrance and exit against unwelcome people, where our volunteers and soldiers are on guard.

5 April – Easter 9 (Sunday). It's already the third Easter that Poles are spending beyond the borders of their homeland. The first and second (years) were spent in the far away, cold Siberia away from their fellow citizens and no one expected that in 1942 they would be somewhere in Iran closer to their goal, which was approaching. A wonderful spring morning, everywhere you see a joyful mood among people. But the bells of our churches are not calling us, only a sacred silence as people crowd to the foot of the altar to give thanks to the Almighty for graces received. With a parade and an orchestra our beloved army entered, their grey uniforms impressing the people around. Among the silence flows a powerful song, “Boże! Coś Polskę”.

The service was performed by the bishop of the Polish people Gawlina. A wonderful sermon, which moved everyone to tears. On behalf of the Holy Father the bishop gave a blessing to all Poles arriving in Persia and those who remained in Russia, in prisons, and those who are living in Poland under the yoke of Nazi occupation “God will give the Poles victory”!

16 April. Guests arrive bringing a variety of gifts for the children. In a word the day passes very happily. But not for all, because instead of enjoying myself, it is a very sad day for me. Mamma fell ill. I live with hope in God that she will recover. Finally came that long-awaited moment that will always remain in my memory. I have to say, after many ... many days awaiting. I went to Holy Communion. I asked God for my mother’s health but God did not want to leave her with us and took her to himself, and we became orphans. I remember that day 16 April, a terrible day for us. A beautiful sun was shining, everybody enjoying their freedom, smiling people on their way to work, I could not find myself a place. Terrible thoughts came to me, that today would be mama’s last day of life. I went  (to her) with the hope that it would be better, I kissed her cold hand, and mother, with trembling hands, cuddled me to herself, and with tears she said: “I will not live much longer, today I will die, take care of your sister and brother”. At 11 o’clock in the afternoon, she closed her eyes forever. Never again will she look at us, nor will she caress us, nor hug us – Oh God!

Shortly after the loss of her mother, Maria Smoluch took up her commission in the Polish army. In the second half of 1942 she was to say goodbye to her father Władysław, when he was sent to Jerusalem as part of his commission, and to her younger siblings Stefcia and Feliks who were sent to Isfahan - 'The City of Polish Children'.

In taking up her commission Maria became part of a larger family - her platoon colleagues.

Her commission took her through the next phase of her life, to Rehovot, to Quassasin, and finally to England where she lived the rest of her life, never to return to her homeland.