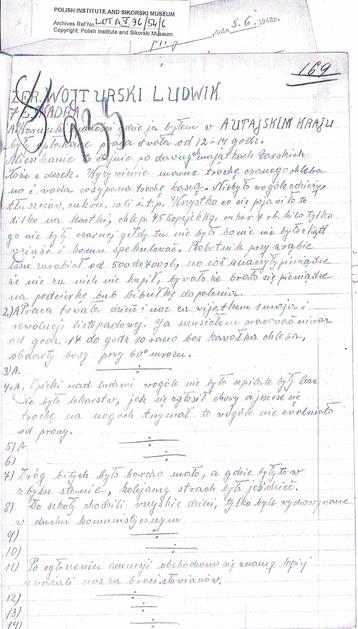 They all reached the port of Kradnovodsk in March 1942, and sailed across the Caspian Sea to Persia (now Iran). They disembarked in Pahlevi and, after the de-lousing procedure and some rest, were moved to Tehran. It was here that Maria succumbed to typhus and passed away. Other contributing factors were starvation and exhaustion. She was buried in Doulhab cemetery, Tehran, and her grave number is 1482. However, she died in 1942 and not 1946 as is stated. 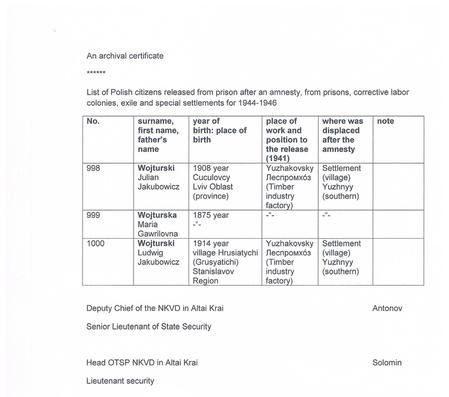 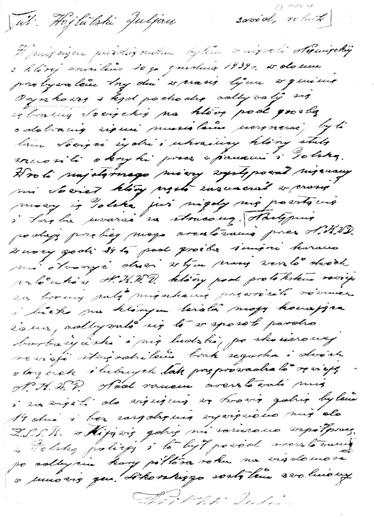 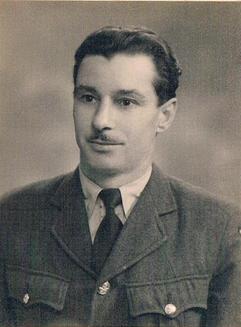 My name is Dominik Allen. My grandma who is half Polish has told me this story about my great grandfather Ludwik Wojturski, my great-great grandma Maria, and my great-great uncle Julian. We have spent many hours talking over this very sad episode in the lives of our family. Grandma has helped me write this article over time in order to tell this story. Sadly Ludwik, Julian and Maria all passed away several years ago, so they are unable to contribute, but we have records to confirm the story.

9-10 February 1940: the temperature outside was minus 26 degrees. In the early hours of that Saturday morning, there was a loud banging on the door with lots of shouting from outside to open it. The NKVD soldiers standing there barged their way in, telling my great-great grandmother Maria and my great-grandfather Ludwik they had only 20 minutes to pack their belongings because they were going on a long journey. They were then taken to the nearest railway station. (Probably Chodorow).

On arrival, they were met with hundreds of other Poles, men, women and children who had also been forced from their homes. They were loaded into cattle trucks, the doors closed and locked, not knowing where they were going and taken to Siberia. Ludwik’s brother Julian was also arrested accused of being a police informer. His wife was lying in bed and she was dying (please read Julian’s deposition towards the end of this story), so the NKVD left her behind, allowing her sister to stay and care for her. It was a most difficult and horrendous journey, locked in the dark, with lots of other people, nowhere properly to sleep, no sanitation, with very little food, water or heating. They were finally ordered to leave the train at a place called Juzny-Leso-Punkt, in the Altai Kraj region of Western Siberia and taken to a forced labour camp. During the spring and summer months, they were plagued with mosquitoes and other biting insects which carried malaria. Inside the huts during this time, they used boiling water and a flat knife to get in between the cracks to kill off other  insects.

One day when Ludwik was working in the forest, he had saved his piece of black bread to eat later, and had hidden it on his person. The NKVD guard saw him with it, and took it to eat it for himself, so Ludwik had no bread that day. He found talking about his experiences very upsetting so we do not have much information about their time in Siberia, but what we do know is written here. On another day, he was taken from his forest work and told to help other prisoners dig a large trench. He was convinced they were all going to be executed. Once the trench had been dug to a suitable depth, they were all made to get out. Some other prisoners were lined up on the edge and shot in the back of the head. Ludwik and the others then had to fill in the trench and return to work in the forest. No one knew why these people were executed. Attached documents confirm that, after the so-called amnesty they moved to the village settlement of Yuzhnyy.

The USA was where Ludwik wanted to go, because he already had relatives there. Minnie, his future intended wife, wished to stay in England as her family all lived in Suffolk, and she won! He met her in the PRC camp where she was working as a cook in the NAAFI. He was then sent to work in Great Harwood, Lancashire in 1946, to a cotton mill, and he was given a room in Moreton Hall, an old family estate home in nearby Whalley, then being used as a hostel to house Poles. He lasted three weeks in the cotton mill, as he could not stand being closed in, and he found all the noise of the weaving shed unbearable. He soon found another job as a labourer working outside. Minnie came up to Lancashire in 1947 and they were married on 1 November 1947. They stayed, and made their home in Great Harwood, and are both buried in Great Harwood cemetery.

Below is the deposition of great-great uncle Julian whose documents were found in the Hoover Institute at Stamford University, California, USA. My grandma knew that General Anders had handed the soldiers’ documents to the Americans at the end of WWII. A Kresy Family member informed her about the university and of how they housed the records. After further research, she wrote a letter to the University to see if they, indeed, had any documents relating to Julian. They had, and so sent them to her. Below is the English translation of Julian’s deposition transcribed into English. It is not perfect English, but we feel sure the reader will understand.

Below now is the deposition of my great-grandfather Ludwik which was obtained by my grandma, from Sikorski Museum in London. She had contacted KARTA in Poland asking if they could help her with Ludwik’s history, and they sent her the details of Sikorski Museum. These are his words, which have been translated into English by a Polish friend and, although the English is not perfect, the reader will, we are sure, again understand.

“Arrested 10th February 1940 in Oryszkowice. I was not given the reason for my arrest, and then transported to Jusny-Leso-Punkt. I was there until September 1941 working in the forest felling and cutting trees. After the amnesty we were told we could stay there working for better pay and food. In the camp informants were Ukrainians. I was deported to Altajski Kraj, Western Siberia working 12-14 hours a day. Accommodation was in old pre-war buildings, sleeping on wooden boards. Food was very poor and very little of it. Small portions of black bread, very heavy, and gruel cooked in water. There was no meat, fat, butter or sugar and salt. Everything was rationed. Bread was 75 Kopek, butter 7 roubles, but you could not get this – the shops were empty. There was no black market as there was nothing to barter with. A working man could earn 500-700 roubles, but nothing was available in the shops. Some men used paper money to make cigarettes. Work went on day and night. The only day off we had was on 1st May and October revolution. Very often I had to work from 17.00 to 10.00 with no food, in rags with no shoes in 60 degrees of frost. Hardly any medical care; hospitals without medication. If you could walk you were not ill, and you were sent back to work. Roads were very poor – hardly any – just rocks, very hard to walk. Small children went to school but of course they were indoctrinated with communist ideology.

After amnesty we were treated a lot better – as Slav brothers. In September 1941 after amnesty we travelled to Samarkand staying in the city for 2 days. Then we were dispersed to collective farms to work. After 2 weeks we were transported back to Samarkand and left with no roof over our heads, in snow and cold weather for another 2 weeks. We were given half a kilo of bread per day and hot water.

People slept in the most appalling places and conditions; and in the morning dead bodies were collected for burial – all Poles”.

“In the month of October 1939 I was in German internment from which I returned 20th December 1939. I stayed home for three days in which time in Oryzkowice town hall, from where I lived, meetings were held by Soviets to which under a threat of confiscation of my land I had to attend. There were Soviets, Jews and Ukrainians who constantly shouted away with pany (lords) and Poland. In a role of a main speaker was unknown to me a Soviet man who often referred in his speech that Poland will never rise up and should be considered lost. Next I present facts of my arrest by NKVD. In the night at 24th hour, under the threat of death it was ordered for me to open the door. At that time walked in two NKVD’s who under the pretext of searching for firearms, turned the house upside down and also a bed on which my dying wife was laid. This was done in a very barbaric and inhumane way. After the search I noticed the absence of a watch (clock) and two wedding bands, that way the NKVD conducted searches. Before dawn they arrested me and took me to a prison in Lwow for fourteen days and without sentencing me took me to USSR where they accused me of co-operation with Polish police, and that was a reason for arresting me. After serving one and a half years, on news of an agreement of General Sikorski I was released”.

After a period of rest and recuperation, Ludwik joined the Polish Air Force in Iraq and came under British Command, whilst Julian stayed with Anders Army. He enlisted in the 3rd Carpathian Rifle Division, travelled to Palestine, saw action in Tobruk, Monte Cassino and the Italian campaign. 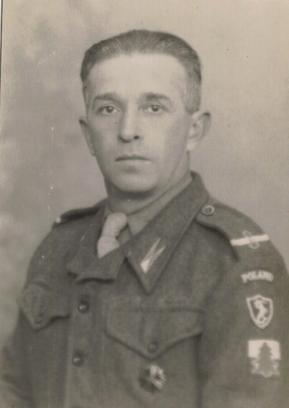 Ludwik was the youngest of three brothers, the eldest being Julian. The middle brother Jozef, who was not arrested and deported, was murdered with his wife, Xenia, (who was Ukrainian) and daughter Marysia, by Ukrainian Nationalists sometime after the February deportation. They were brutally tortured and mutilated before they died. Their bodies were buried between two flowering cherry trees on their land by Xenia’s family.  No one has touched or built on this land since. My great-great grandfather Jakub had passed away in 1923, and is buried in Oryzkowice cemetery.

Great grandfather Ludwik was born on 3 February 1912 in the town of Hrusiatycze, not too far from Lwow. They later moved to the village of Oryzkowice where he and his mother were arrested on that dreadful night. 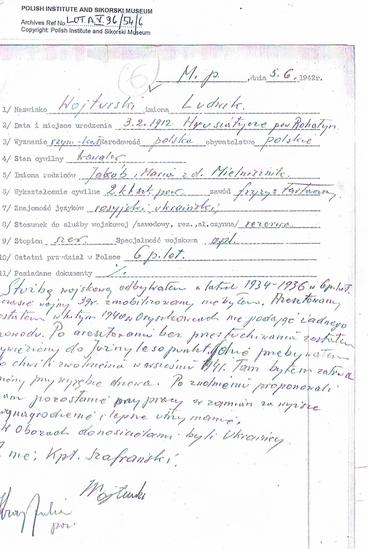 Ludwik arrived in Glasgow, Scotland on 30 May 1942 via Bombay, India and Capetown, South Africa. He was enlisted in the 306 Polish fighter squadron as a flight mechanic. 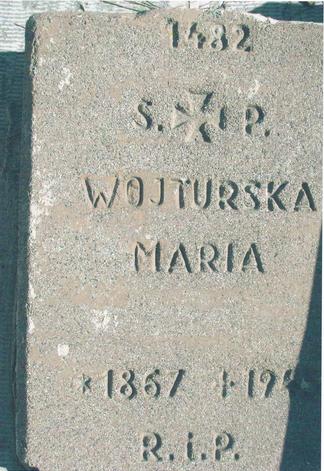 Ludwik's deposition written in Polish. Page one above and page two on the right.

After the war Ludwik transferred to the Polish Resettlement Corps and was stationed at East Wretham, Norfolk. Julian arrived in England after the end of WWII and was stationed at Great Levermere, near Bury St Edmunds, Suffolk. However he returned to Poland at the request of his brother-in-law, who convinced him that conditions in Poland had greatly improved. 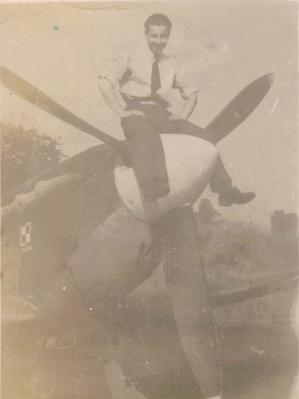 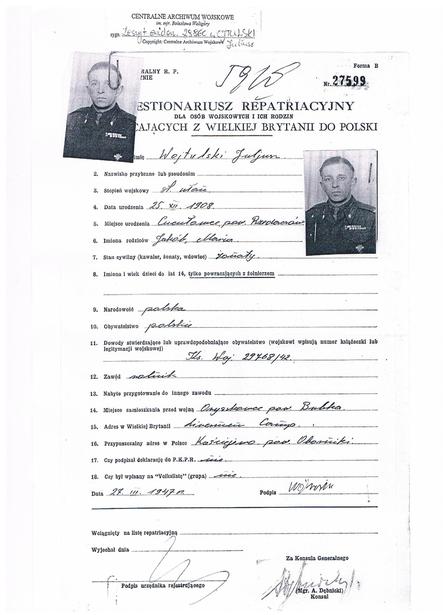