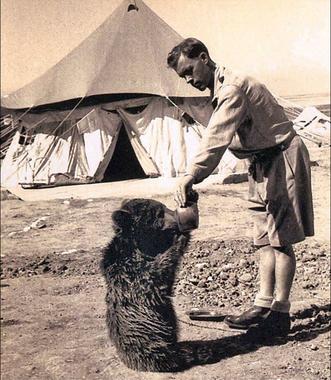 ​Wojtek can you hear me?

Wojtek can you hear me? Wojtek do you still remember me?
Wojtek czy pamietasz ? Wojtek czy jeszcze pamietasz mnie?

The penetrating sound of friends transcend the pages of time

The waves of the Caspian brought to Persia many broken souls
A cascade of hopeful, starving and helpless deported Poles
They were housed in civilian camps with clothes and a meal
And Persia allowed them many gifts just to help them heal

One day a Polish solder appeared with a young girl he can't forget
He traded the boy a handful of coins and bought the girl a pet
She took her gift into a civilian camp but quickly saw her error
This was not the place to raise this mischievous, little  bear

They taught him how to smoke and how to drink their beer
And when he wrestled them to the ground, everyone would cheer
The rays of the Middle East sun would become a soldier's wrath
But a hole was dug in sand with water so the bear could have a bath

He was a smiling little warrior and from the wild easy to tame
And so the soldiers decided that Wojtek should  be his name.
They taught him to speak Polish and showed him that they cared
And recognized him as a Polish spirit wrapped in the body of a bear.

Someone said he was a bear and only soldiers could be on the ship
So they enlisted him as a Private so he could make the trip
So now he had a number, was a soldier in every sense of the word
And nobody in the 22nd Transport thought this was absurd

So he proudly carried the boxes to show his soldiers that he could
And they cheered and bestowed their pride as every soldier should
The battle had been fought for so long on this shattered, bloody hill
But this  time it would take more than just courage and skill

And when the war was over the soldiers had to rebuild their lives
But where do you put a bear that was strong enough to survive?
They took him to Scotland where many soldiers had decided to go to
And finally realized that Wojtek's best home would be Edinburgh Zoo

Wojtek had come on a long journey and for a time been free
Walking on the grounds with soldiers and enjoying the shade of a tree.
It broke every soldier's heart to leave their brother behind the cage
He was one of them , but now the reality of life was on a new stage

So the Polish soldiers who stayed , visited him every chance they had
And shared a cigarette as they talked of good times and bad
The dimensions of time take Wojtek back to where he is today
But if you speak Polish ......he can hear what you say

And Wojtek turns his head and looks the soldier square in the eye
And tears stream down the cheeks of both in a silent, bonded cry

Wojtek we will all remember you.
We will never forget you 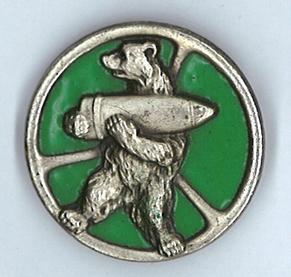