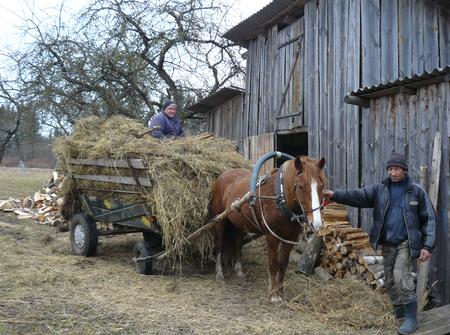 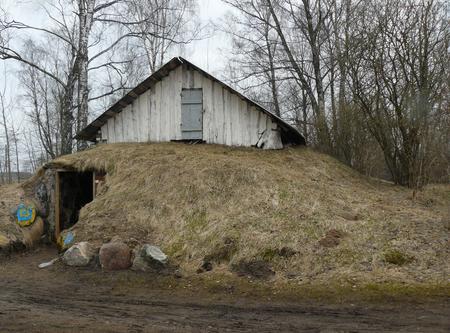 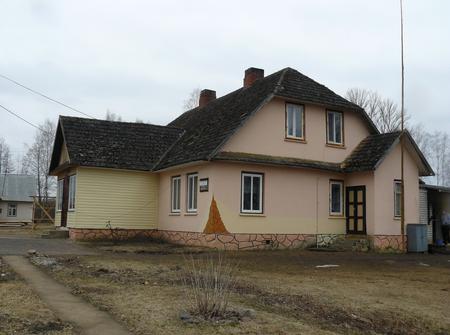 My driver looks perplexed. “I am sure there was a school here, just before the village proper; how strange I cannot see it now…” So we drive back and forth along a track just off the main road and finally decide to ask. A little off the road, sheltering behind a screen of trees stands an interesting building – walls in fresh pink and yellow colours and a sharply contrasting brown roof, a short driveway leads to a spacious forecourt.  Who would have guessed that this is the Polish osada we were looking for! I knew from some documents I had seen that Stary Dwór was a Polish settlement - osada - from the 1920’s and I expected to find nothing more than an abandoned and ruined farmstead as in the case of so many all Polish settlements of that period, but a school – that is a surprise!

Nobody seems to be aware of our presence; I walk about inside the school and finally have to shout to attract attention - “a visitor from abroad! Interested in the history of Stary Dwor! "Come, come upstairs!” someone shouts from above. Excitement, commotion and confusion as the head teacher tries to find her files about the history of the school.

What a surprise! I had almost given up hope of ever finding a ”living” osada but, here, I am looking at a well-preserved footprint of a Polish osadnik wojskowy -an ex-military settler. I am actually inside a country house built by major Zieliński in 1934 – the date is still visible on the foundations. When the Germans came in 1941, they mounted a machine gun in the window and used it to dominate the road and the open countryside in front. The building was saved when in 1944 it was converted into the village school; it was subsequently refurbished and modernized but essentially all its original features were retained – the head teacher proudly points out the original doors, floors, staircase and, in particular, the roof covered with wooden tiles. The outdoor scullery is still as it was then:  a few steps lead to a chamber below ground level covered over by a mound of earth – the wooden structure on top is a more recent addition.

But try as they did, nothing about Polish osadniki could be found in any of the papers at the school, so we all went to the village library. There, the history of Stary Dwór was beautifully presented in a dossier. The teacher was quickly scanning through the pages – we can read all about the Tsars, about Graf Kontakizina, about the revolt of the local peasants in 1905 and how it was brutally put down by Graf Klehis… about the contribution to life and the wellbeing of the people under the Soviet rule… “Ah! Here’s one reference to osadniki” exclaims the jubilant teacher. But as she started to read out aloud, a perplexed look appeared on her face and her voice trailed off… “osadniki wyjechali za granice…” Even she couldn’t quite believe what she was reading – the statement implied that the settlers “departed beyond the borders of the country – of their own free will…” That one short statement encapsulates the twisted history presented in Soviet textbooks: the settlers departed of their own free will; they “emigrated”! – to the GULAG and Siberia!

We all knew we had to look for the truth somewhere else. A man in the street points to the place where the oldest people in the village live, so I knock on the door and I am welcomed in. “Come in sit down.” The old man doesn’t even budge; he sits sprawled in his armchair leaning heavily against the wall, thick convex glasses on his nose, a somewhat perplexed look on his face as if he was in a dream. For the “Good Morning,” he tells me – “You know, the Communist Party did a lot of good…” Wow! Whom have I found here? A rarity, still alive, still dreaming, still full of Communist mysticism… a true, believer in Communism, in Lenin, Stalin! I couldn’t divert him from this train of thought, but his wife was alert; she understood and wanted to change that line of conversation – “You know, we moved here in 1957, we don’t really know what happened here before then…” she explained with embarrassment. I had to get away quick; the old man waved to me from the chair, disappointed – “Come again, let’s talk a little. You know…”

How many more settlements do I need to visit to realize that the history of Polish osadniki is couched in two unforgettable euphemisms: rozebrali and osadniki wyjechali za granice – as if there were no more-appropriate words in the vocabulary of the Russian language.

Rozebrali – as if dismantled log by log, brick by brick, each numbered, to be later reassembled… when, in fact, it meant: ransacked, ravaged, destroyed, each log and brick carted away, everything levelled to the ground; its people forcibly removed, all footprints erased from history and soon to be erased from people’s memory.

And that “beautiful” statement: osadniki wyjechali za granice – settlers left the country – gone beyond the borders of the country – as if emigrated, left of their own free will. Indeed, they left the borders of their country, but not of their own free will, and to the land of their choice – they were deported to the Gulags in Siberia, Kazakhstan, the interior of Russia, to work in the mines, in munitions factories…