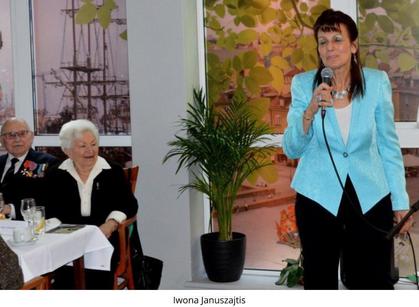 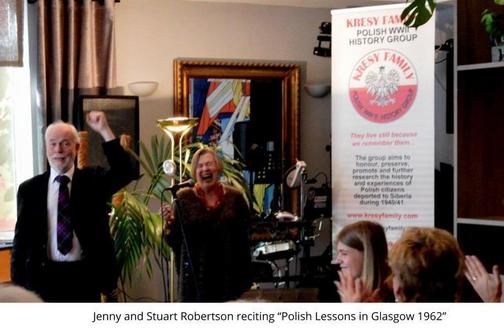 After a well-prepared lunch by Łowiczanka catering, a musical interlude was provided by Iwona Januszajtis who performed two of her own haunting compositions; “Where Are We Going” a tribute to her mother’s Siberian experiences which she first performed at last year’s commemoration;  “These Beautiful Hands” to words written by Ala Squire in memory of her mother. Iwona’s repertoire provided contrast in which she was joined by the audience in singing other songs including “You Are my Sunshine”. Iwona found a volunteer in “Pan Antoni Matwiejczyk who sang “Kozaka po polsku” with all the gusto of a man half his age to rapturous applause.

Jenny Robertson is a Scot who together with her husband Stuart have taken an intense interest in Poland and its history since their student days in Glasgow. A duo reading of their own poem written in Polish and titled “Polish lessons in Glasgow” received enthusiastic applause. Jenny spoke about her early contacts soon after the war-end with Polish exiles which led her to study the language and, as an author, to write on Polish subjects.  Her book “Wojtek: War Hero Bear” is a popular topic amongst schoolchildren to whom she often gives talks. It leads her to explain the reason for a Polish Army to be in Iran at that time, their origins from Kresy and their fates in Siberia.

Jenny read a passage from her book “ From the Volga to the Clyde” and gave an insight into her most recent publication  “From Corsets to Communism: The Life and Times of Zofia Nałkowska” a biography of Poland’s leading modernist writer. She also read a passage from Nałkowska’s diaries, written during the winter of 1941 in Warsaw, describing how despite the hardships of life she continued her artistic activities. 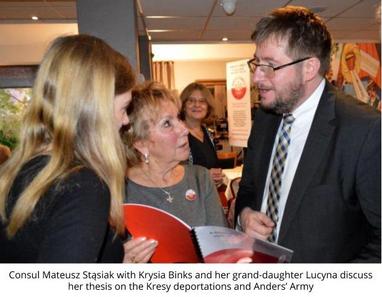 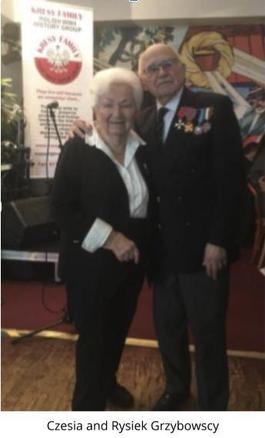 Kresy Family Polish World War II Group has commemorated this event each year since 2015 and 8th February this year was no exception succeeding the work of OROK (Ognisko Rodzin Osadników Kresowych - Association of Borderland Settlet Families). The number attending has continued to grow. Survivors, families and friends totalling 121, arrived at Łowiczanka restaurant in POSK, a significant number being grandchildren of survivors. 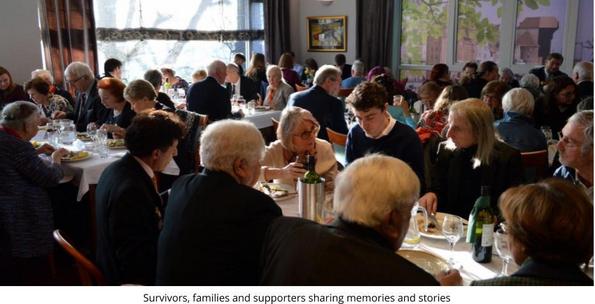 Mirka Wojnar, chair, welcomed guests including the Polish Consul General, Mateusz Stąsiek, and led applause for the 25 survivors present.  One of those, Czesia Grzybowska, gave a talk about those events in 1940 and later, recalled memories of her experiences which still remain. Despite the hardships she had suffered, her life was blessed  with a husband, daughters and good health. She recommended reading of authoritative historians for the truth of those times: for Poles, a truth which after 80 years is not widely recognised and even denied.

PAST EVENTS AND REVIEWS 2020

On February 10th 2020, it was 80 years since 110 freight trains were each loaded with 2000 Poles across Eastern Poland.  A further three such deportations between February 1940 and June 1941 displaced a total of some 1.7 million people into exile and forced labour.

Czesia, Jenny and Iwona and guests provided a fitting contribution to commemorating this all-important anniversary and reinforcing the Family spirit of all those touched by the deportations and their descendants.

"From Corsets to Communism, life and times of Zofia Nałkowska"
A biography by Jenny Robertson

​Published May 2019
A review by Tadek Wojewódka

As the son of Polish survivors of Soviet deportation to Siberia during WWII,

born and raised in London, I am surprised that I have not previously been aware of Zofia Nałkowska.

For those who have not heard of or read this author, this biography whets the appetite for Poland’s leading modernist writer.  It has taken a Scot to write a biography in English to have brought this renowned Polish author to my attention with a well researched and written work.  Nałkowska’s stature is established very early on in the book with a quote from her colleague “If you wrote in French, English or Norwegian you would be the most famous writer in the world”; and later, ” many marvel at her ability to use words like a painter”.

Jenny Robertson’s recently published book tells of the life of an impoverished but talented woman, born in Warsaw in November 1884 into a Polish society, not only divested of its nationhood by neighbouring oppressors, but one that is male-dominated and conservative. In 1907, she spoke at the first Women’s Conference in Poland calling for sexual equality and yet, as her life unfolds, this ambition remains unfulfilled through two marriages and a series of affairs in which she experiences unfaithfulness and betrayal, a theme explored in “Women” (1906) and  “Narcissa” (1910).

Nałkowska’s writings are drawn from her own life experiences during a period of violent upheaval - the First World War, Polish independence, the inter-war years, Nazi invasion and occupation, and a Communist regime. “Count Emil” (Hrabia Emil, 1920) sets a contemporary romance within a backdrop of the Polish-Russian conflict and addresses themes of war; “The Romance of Teresa Hennert” (Romans Teresy Hennert 1924) and “The Knots of Life” (Węzły Życia, 1948) presents criticism of Polish governments of the Second Polish Republic;  A stay at a Swiss sanatorium in Leysin in 1925 provided the material for "Choucas", (French name for Alpine choughs).  It explores themes of nationalism, love, suffering, God and war through pen portraits of a variety of Europeans.  “Medallions” (Medaliony 1946), a collection of short stories, brings into focus the reality of the Nazi occupation.

Nałkowska is known to generations of post-war Polish secondary school students through the study of the set book “Boundary” (Granica 1935), her most acclaimed novel, set in Grodno in the Eastern borderlands (Kresy) for which she won the state prize in 1936.  However, her work fell out of favour and suffered criticism under the Communist regime which left her feeling that she had no further contribution to make to Polish literature.  She did not join the Communist party but, yet, was appointed to the Committee for the Investigation of Nazi War Crimes. Her life and work have become better known since the publication of her diaries in six volumes, the first of which was published in 1975 and the last in 2001.  She is the author of 15 novels, 11 collections of stories and three plays.

Jenny Robertson, author, poet and teacher, first had contact with “things Polish” as a schoolgirl, corresponding with a Polish lady in a displaced persons camp in Germany.  She graduated in Polish from Glasgow University and spent a post-graduate year in Warsaw. Since then she has developed an intense interest in Eastern Europe. She is the author of books including, “War Hero Bear” (2014) about Wojtek the bear adopted by Polish soldiers during WWII, “Don’t go to Uncle’s Wedding” ( 2000) about the Holocaust and “From the Volga to the Clyde” (2014) a collection of true, thought-provoking stories, winner of US Premier Book Achievement Award.
Her output extends to some 40 titles for children as well as adults ranging from Bible stories to themes of mental health.

“Corsets to Communism” is highly recommended and is available from
https://scotlandstreetpress.com/product/from-corsets-to-communism/
£12.99