Polish Women’s Auxiliary Service (Polish Forces in the Middle East)
Following the transfer of the 2nd Corps to Italy and the resulting move of the remaining PSK units, a new PWSK Inspectorate was established in Egypt. Lt.Col. Antonina Plonska was appointed its Commandant. On 7 May 1944, the Inspectorate, which became part of the Polish Forces in the Middle East, numbered 1,774 PWSK soldiers. The PWSK Inspectorate’s task was to retain organisational unity, especially the Young PWSK Schools in Palestine, the PWSK Company at HQ Young Soldiers School, the PWSK establishment at the 8th Field Hospital (1,200 beds) to which long-term wounded and sick from Italy were sent. Above that, there were the various administrative units, such as the PWSK Reserve Company, Signals Platoon, 320th Transport Company and smaller PWSK units in Cairo and at HQ Palestine Area.

Young PWSK Schools (Szkoła Młodszych Ochotniczek – SMO)
These schools, the first such experiment in the history of the Polish Army, reached their organisational zenith in the Middle East in the years 1944-1947 when, in near normal conditions, they practically managed to carry out their planned programmes. All the SMO were organised into a single military administrative unit. The task of the Schools was two-fold:

As a military unit, it was divided into:

The school companies were of a military character specially geared to bring up the girls within a military programme. In addition, they performed their normal administrative tasks.

At the head of the SMO stood a commandant, directly subordinated to the OC Schools for Young Soldiers and PWSK. Throughout its existence, from 20 May 1942 to 15 June 1948, the Commandant of the SMO was Major Teodora Sychowska. An advisory role in the teaching programme was held by the directors of studies who were also the commandants of the individual schools, all of which were in Nazareth in Palestine.

The number of girl-pupils stabilised at 450 after the schools’ arrival in Palestine in April 1942. Throughout the period up to 1947, the number fluctuated between 500-600 pupils, with the exception of the 1943-1944 school year when the figure shot up to 800. This coincided with the arrival of 162 pupils from the various civilian centres, mainly in Iran, as well as 175 pupils sent from PWSK units to take their matriculation examinations. In all, 424 volunteers were directed from PWSK units to the schools, including 40 girls from the Home Army (Armia Krajowa – AK) in 1945.

On completion of their schooling, 741 young women were directed to the ranks of the PWSK, the greatest number in 1944, some 300 were sent to the 2nd Corps in Italy and to the Polish Air Force in the UK.

PWSK Company at HQ Schools for Young Soldiers and Young PWSK
This was an administrative unit only, encompassing the teaching and administrative staff of the schools. Throughout its existence, the company commander was Capt. Aldona Marszalik. Company HQ was at a camp in Barbara, some 50 miles from Tel-Aviv, and the company’s strength was 180.

WSK Sections in Jerusalem and Tel-Aviv
These were small units encompassing PWSK working in army institutions stationed in these two towns. In Jerusalem, the PWSK unit worked in the Publications Commission in which Capt. Dr. Janina Pilatowa played a prominent role. The Commission prepared scripts and military literature, for use by the troops. This expanded to the preparing and publishing of popular novels, reprinting of the great Polish classics, as well as contemporary books written during the current war, such as “Oława” by Beata Obertyńska and “Po Narviku był Tobruk” (After Narvik came Tobruk) by J Jasieńczyk. Books written by soldiers formed a growing portion of the publications printed.

Apart from the normal duties, the company played an ever-increasing role in the field of education, welfare and entertainment.

Following the departure of all transport units to the 2nd Corps, the need arose to organise a new company for the needs of those forces remaining in Egypt. For many months, all the transport needs of these forces had to be catered for by this company.

Signal Troops PWSK Platoon
This was not a typical unit of the army, being a platoon encompassing PWSK personnel working in several specialist signal platoons:

There was an especially-friendly atmosphere amongst the Signal units in Egypt. This was due in no small part to the PWSK who not only played an active role in the life of the soldiers’ clubs, but organised Polish language courses for American soldiers of Polish extraction stationed nearby. Twice-weekly lessons were held for them and the unit library lent them books and periodicals.

8th General Hospital for Invalids
The Invalids Hospital for 400 beds was set up on the order of the HQ Polish Army in the East on 13 October 1943. The hospital was attached to the British Hospital near Gaza Ridge and its aim was to bring together all the invalids in the Middle East. It gradually expanded to 1,200 beds, moved to El Kantara in Egypt and was renamed the 8th Field Hospital. It served for the long-term wounded and sick from the 2nd Corps in Italy. Its establishment was 110 sisters of the WWSłZ and 160 PWSK: doctors, pharmacists, laboratory assistant, administrative  personnel, all of the commissioned rank, and nurses in NCO and private ranks. In this well-organised hospital, an Emergency Medical Service course was organised after the war for the sisters and nurses.

In the UK, there were nine recruitment drives for the PLSK, in all 1,436 volunteers of whom 52 became officers and 110 NCOs.

The first course for the PLSK recruits began on 18 June 1943 at the Training Centre in Wilmslow near Manchester. The instructors were British personnel from the WAAF. The course was attended by 36 volunteers who, in addition to the normal curriculum, had English language lessons. In accordance with Polish custom, each pupil took in turn to be the daily duty pupil in charge of the courses internal programme, which included prayers. The translator and squad leader was Helena Paszkiewicz, who later became Commandant PLSK. She had gained experience from her earlier service in the WAAF. After the completion of the course for recruits, a three-week officers’ course commenced at the RAF Officers Schools in Windermere for 12 volunteers. The remaining 24 corporals were sent to various airfields to gain experience in administrative work. Subsequently, the volunteers holding the rank of corporal were sent on the courses for officers.

The two-month long officers’ course (20 August 1943-19 October 1943) was successfully completed by all the candidates who received the British rank of Assistant Section officer (ASO) and, later on, the Polish rank of second lieutenant granted by the AOC-in-C Polish Air Force.

From a class of 26 British and Polish officer candidates, first place was achieved by a Pole, Aniela Pędzilak.

All Polish volunteers from the Middle East and other countries underwent training throughout 1944. The practical skills learned proved useful not only during their service in the PAF but often later in civilian life too.

They worked in 24 different specialist branches, and the officers in eight. PLSK Personnel worked not only in Polish squadrons and flying institutions, but also in the RAF ones. Despite the language difficulties, Anglo-Polish co-operation worked well. The work carried out by the PLSK received the attention of the senior Air Force authorities. In April 1944, Air Force Major General M Iżycki made an inspection tour of the third course for recruits at Wilmslow and, in his order of the day, in front of all ranks of the Air Force, said:
“It is with pleasure that I commend the effort made by the officers of PLSK. With the friendly and practical support of their British WAAF friends, they have managed, despite the difficult conditions, not only to teach and train their subordinates but to take care of them. By their own example, they were able to make easier the transition into a completely new way of life for the volunteers. It is with the utmost regard that I recognise the enthusiasm of the volunteers to serve, and it has truly impressed me.”


Polish Women’s Auxiliary Naval Service (Pomocnicza Morska Służba Kobiet – PMSK)
The basis for the organisation of the service was the above-mentioned order of the Minister of National Defence of 11 July 1944.

Initially, only volunteers for officers and NCO ranks were to be trained in Britain and undergo practical service in the Royal Navy. The service was to expand and begin its duties within the Polish Navy, only after the return to Poland of the Polish Armed Forces.

The tragic political consequences of the war put an end to these plans. At its peak, the PMSK numbered 186 volunteers.

Continued on Page 7: The End Of The War / The Polish Resettlement Corps / The Women's Auxiliary Service song 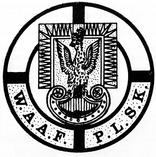 a few days before the catastrophe in Gibraltar. 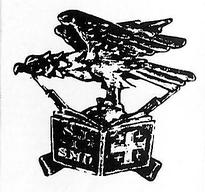 When in early 1946 professional courses were set up, the Reserve Company was quick to organise English language courses for 112 volunteers, a glove-making course, a fashion accessories course, as well as several typing courses. Before their departure for the UK, the first Women’s Section of the Polish Ex-Combatants Association in Egypt was organised with 82 members. 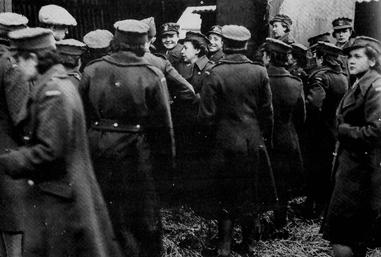 Preparations before the next long journey. Egypt 1944.

Maintenance and repair on a Polish aerodrome. 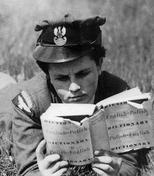 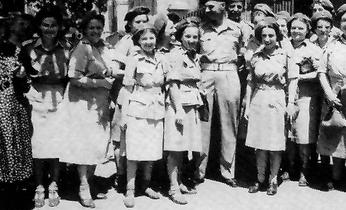 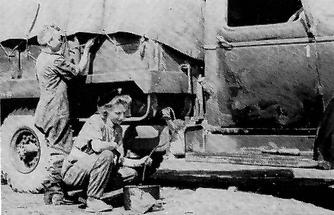 In April 1943, the first Recruitment Board was set up in the UK for the Polish Women’s Auxiliary Air Force (PLSK). Thirty six volunteers came forward, who were to become the cadre for future instructors – 12 officers and 24 Polish corporals in the WAAF. 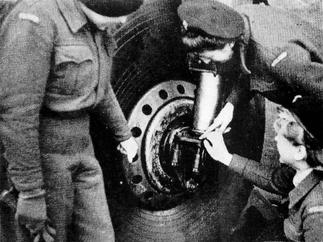 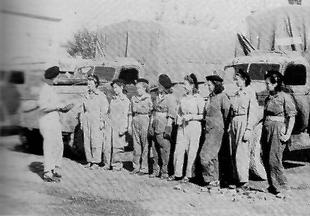 The PSK volunteers transferred from the Polish Army in the USSR to Great Britain, to join the Polish Women's Auxilary Air Force - PLSK . 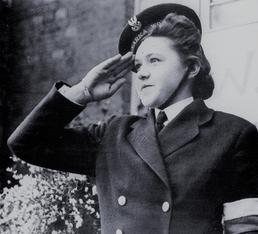 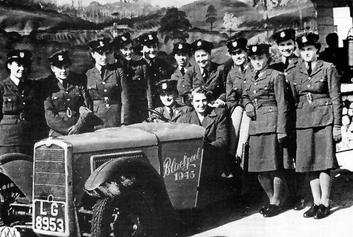 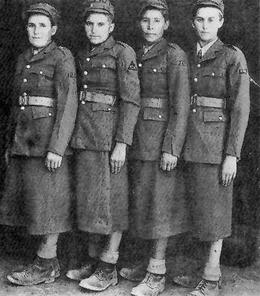