Read about the deportations here. Many of the deportees describe the train wagons as being “ cattle trucks”.

In fact, box cars called "Teplushka" were the usual form of transportation for ordinary people, as well as for millions of soldiers to the front, for prisoners and PoWs to the Gulags and for civilian deportees to Siberia. These were not normally used for cattle, goods or freight transports. In some cases they were used for transporting the soldiers’ horses on one side, with the bunks removed on that side. ​​​
​

Sometimes the deportees had to change wagons from the smaller to the larger, which explains the varying quoted number of people in the wagons.

Danuta wrote in her diary:

10 Feb: After a two-hour sledge ride we arrived at the station at Lubomirka. We were ordered to board a wagon and were only allowed to keep small luggage with us; the rest was loaded into the goods wagon. Throughout the entire day, more and more families arrived. In our wagon there were 42 people. The train moved out during the night but I could not sleep. Others could not sleep either and we spoke to each other in whispers, wondering what would happen to us.

11 Feb: About midnight we arrived in Równe, where more families were loaded onto our train. The children, who were in schools and colleges in Równe, were rounded up by Russians to join their parents. Their families, who had been forced to leave home without them, greeted them joyfully. At Równe we were given water and coal for use in the stove in the centre of the wagon. We were allowed to get out of the wagons, though told not to stray too far, as armed guards were watching us closely.

We think that the deportees thought these were cattle trucks because in Poland passenger trains looked different, with compartments. They were not passengers but prisoners: the doors were locked and only unlocked for guarded, short stops. And, of course, they were herded and treated like cattle.

Read about the fates of the deportees here

The larger one, was a later version, it was longer and had 2 wheels per axle -
and so had room for more people and 2 stoves - as in the diagram below drawn by one of the deportees 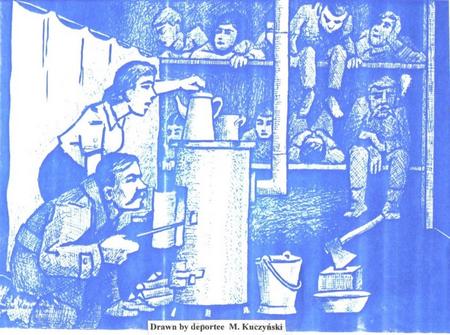 There were 2 sizes of wagons:

the earlier ones were smaller, with one stove and single wheels per axle. They could probably pack 30-40 people into each wagon.

13 Feb: After a two day stop over we moved off. Twenty minutes later the train stopped at Zdolbunow Station at midnight and we were ordered to change to Soviet wagons that were larger and ran on wider tracks. They pushed 72 people into each of these wagons making it very cramped and stuffy, the two tiny grilled windows let in very little air and light. A few families had to push hard to find room on the board bunks called “prycze”, of which there were two levels, ranged on both sides of the wagon. As I lay on my stomach on the top bunk, I peered through the window-slit observing everything I had seen and putting it down in writing. On each side of the wagon screwed to the floor there were two round iron stoves on which one could warm up something to eat. On one side by the sliding door was a hole cut out in the floor for the purposes of hygiene. For decency’s sake my father screened it off with a blanket. 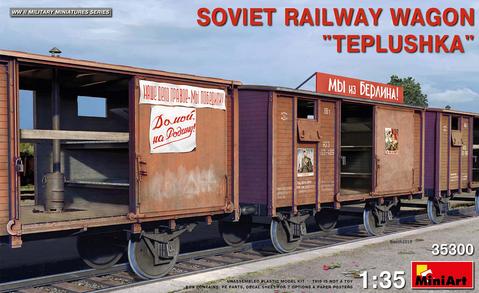 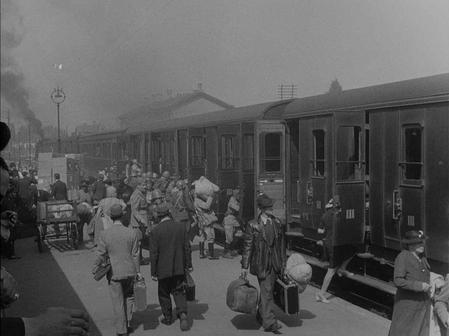 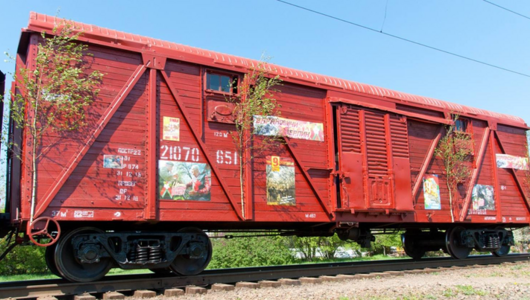 These were not “adapted” for the deportees: the benches and stoves were already part of the standard “Teplushka”. The stoves were called "Pechka".