FROM THE EDITORIAL COMMITTEE

The idea for the compilation of this next volume of the history of the settlers’ families for the years 1940-1946 follows the publication by the Association of the Families of the Borderland Settlers of the previous collection of stories with the title Z kresów wschodnich RP .Wspomnienia osadników wojskowych 1921-1940. (From the Eastern Borderlands of the Polish Republic – memories from Military Osadas 1921-1940) London.

Many of the writers ended their stories on the night of 10 February 1940. A number, however, did not manage to stop on that day because the memories of their nightmare experiences in exile weighed on their hearts and minds. Because of what was stamped so painfully on their psyches they felt the need to express their stories so that their memories might be handed onto the next generation, and simultaneously, be truthfully reported as the correct historical basis of their lives.

Events and happenings as seen through the eyes of children who were the heroes of these occurrences, are written from the perspective of half a century. Therefore the mental pictures of those distant years are more or less distinct, the descriptions more or less accurate, but what is for certain is that they are one-off experiences so that each set of impressions is completely individual. For these reasons it appears to us that it is proper for the memoirs of these unquestionable historical truths to appear in print.

The inexorable passage of time means that the last of those involved are themselves disappearing. In just a few years there will be nobody to write them down, nor will there be any from whom to seek the facts, then all traces of the routes along which wandered those condemned to exile and later to freedom will be eradicated.

Despite the fact that the events narrated in this collection took place in very similar circumstances and occasions, they nevertheless differ in many ways. Such differences are exhibited not only by the talents of the writers but also by what they include – experiences, contents, background, particulars and most of all the intensity and depth of what they went through which, even after half a century refuses to be erased.

These stories are also the means of honouring the memory of those thousands whose lives were sacrificed; those whose graves – very often little more than shallow depressions in the frozen soil of the north, wayside ditches in Kazakhstan, or even railway stations, for their bodies were abandoned by the rail track as the train moved on – litter the trail of their wanderings.

These stories are also the means of paying tribute to our heroic parents – and especially our mothers – who, time and again, with their own hands buried the bodies of their children, and very often gave their food to save their offspring, even while they themselves were dying from hunger.

And, yet again, these tales are ways of paying homage to all those settlers who, though dreadfully abused by the ghastly distress of years of exile, still survived and today live on into serene old age along with their children, grandchildren and great grandchildren, though often in a foreign land far from their beloved Borderlands. 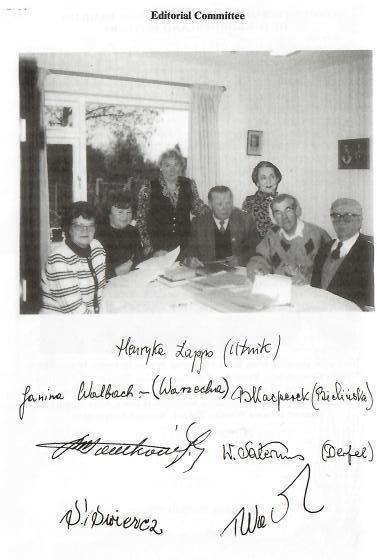