I was the wife of the military settler Józef Grobel of osada Woławel. On 10 February 1940, together with five children, we were deported to posiołek, Nukhta-Ozero, in Archangel County. On that day, my husband was arrested and kept under armed guard in the local school. I was in a state of panic not knowing what to pack for the journey. My daughters, Helena and Lucyna, helped me in their own little ways. At the Drohiczyn railway station, my husband was brought to join us so that we all travelled together during that strenuous journey in a cattle truck.

We were housed in infested barracks and forced to work very hard in the forest. Even when for a short time my husband had a job as a railway worker, we still could not earn enough to feed such a large family so that we were simply starving. Conditions were so bad that, when we were joined by my mother, Maria Ślimak, she soon lost all hope of endurance and died in her 68th year.

Following the amnesty and a whole series of happenings, we eventually travelled to southern Russia where we ended up on a collective farm near Bukhara. It was there that our youngest son, Michał, died at the age of seven, followed by our nine year old, Lucjan, while in a Bukharan orphanage; my daughter, Lucyna, joined the cadets and my husband enlisted in the army. As for our son Kazio, he was in an orphanage in Bukhara, so weak that he could not walk. Nevertheless, I collected him from the institution to have him with me on the farm where a warm-hearted Russian woman helped me by carrying him about on a donkey. Yet, despite all these efforts, we could not save him and he died as well. I buried him somewhere in a ditch since they would not accept him in the Muslim cemetery and there was just no chance of taking his body back to Bukhara. Heartbroken, I don’t know how I managed to live through the grief I felt at the deaths of my three sons.

Life lashed us in different ways. I encountered both the good and evil people – the woman with the donkey and the mean-minded transport commandant who would not lift a finger to help me and my daughter, Hela, to try to find my husband. Yet, on a later transport, I came across a very decent officer who provided us with the chance to journey out of that inhuman land. I never knew his name but I can readily bring his face to mind and gratefully remember his concern for us.

I have already reached the age of 90 and have always had a heart weighted with the grief and sadness that not one of my three sons ever saw freedom, but lie for ever, buried in alien, hostile soil.

Rozalia Grobel on her 90th  birthday, 20 June 1995, with two of her great-grandchildren, Louisa (on the right) and Katherine. 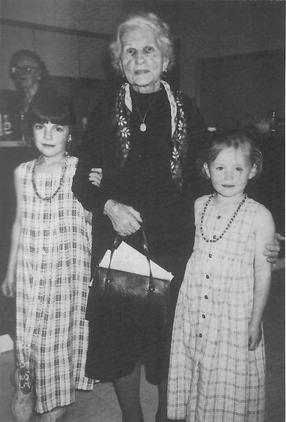