Front of the church in Zakoziel as it appeared in 1993

The majority of the Karłowicze settlers hailed from central Poland and had wives, who came from the neighbours of their families. Our own parents came from Łowicz and so our house was full of hand-made articles from that region. Mummy was particularly gifted in craft techniques.

Gradually living conditions were improving and children were growing up, so it was necessary to provide a Polish school. Around 1930 a two-storey four class school was built. The plot for this was offered by the Szuliński and Bańcarz families. It was very convenient as it was right in the middle of the osada. On the first floor was accommodation for the teachers and the ground floor held classrooms, where lessons occurred using the two shift system. Our first headmaster was Mr Rutkowski, who just before the outbreak of war was followed by Mr Józef Bazylewicz, who went through Russia, Palestine and Italy and then, up to his death, lived in Reading, England. The school building also served as the centre for social activities and for national celebrations. It was also used by visitors from the outlying communities of Działtowicze, Woławel, Woławka and Drohiczyn.

Everything changed in 1939. At home conversations took place in muted voices and neighbours came to discuss things, which I as a child could not understand, yet nevertheless gave me the feeling, that something untoward was at hand. The Russian language was introduced.

Then out of the blue, during the night of 10 February 1940, Soviet soldiers, accompanied by local Ukrainians, rounded up all the men from the osada and marched them to Zakoziel where they held them under guard. Two hours later they came  and collected the families. The Karłowicze families were loaded onto cattle trucks at Drohiczyn railway station. The journey was very strenuous. We slept side by side on bunks with some 30-35 people in each wagon. The new place of settlement was Nukhto Ozero Forest Centre, Plessetskiy, Yemtsy Station, Archangel Province.

We were housed in a barrack with a long corridor running down its centre with rooms on both sides. These were whitewashed with chlorinated lime and contained a stove with an open grate and a canopy. In the corner stood a bunk bed and a table. Our five person family plus one single man were housed in this room. Our parents were immediately put to work in the forest cutting trees, chopping off branches, removing the bark and cutting them into appropriately sized logs, which they stacked in piles. It was very demanding work. Daddy injured his leg as he chopped off a branch, so he was given lighter work in the posiolek itself, where he worked as a plasterer with mummy as his helper. At least this meant they didn’t have to take a long walk to work and it was somewhat warmer during the winter. My sister Władzia, 12, acted as a child minder for a Russian woman while I, at 9 years of age, had to attend school.

Near the posiolek was a patch of land available to everybody, where they could clear out tree stumps and plant potatoes. A lot of people took advantage of this because summer, though short, was warm and everything grew. In the forests there were lots of mushrooms, berries and cranberries. This proved a boon to many people, because mushrooms could be salted and berries dried and this meant that there was always something put on one side to eat. After Hitler’s attack on the USSR matters worsened considerably. Now people suffered real hunger.

The amnesty brought hope for a better future. The news reached us  late in the year and people didn’t know where to go. It was January 1942 when we left the posiolek. We travelled for around a month  hungry  and in rags, but free with hope in our hearts. There was less and less food but in a regular pattern, we were promised some more would be available at the next station. People had to live somehow, so they just simply stole whatever they could lay their hands on. In the stations as soon as it  became dark, groups, mainly of women and children, slipped out of  almost every wagon. Their objective being to break the seals from the goods wagons and bring back whatever they could find. Sometimes it was a sack of flour or sugar, sometimes meat or indeed anything.

From one such expedition boxes were brought in and hidden among the luggage. When the train moved, somebody looked in the boxes to inspect what they contained. Imagine the surprise of discovering pistols! They were all flung out through the open windows into the fields. One evening someone was stealing flour and it  was scattered outside our wagon and guards coming across this notified the commandant. He wanted to institute a search but the Pole who was leading the transport convinced him that the flour had been spilled during the exchange of food. The train moved on and we heaved a sigh of relief.

On one of the stations mummy and Mrs Kamińska didn’t make it back to the train and were left behind. They were missing for a day and a half, during which time daddy didn’t feel well. Dr Grażna Czekańska who was in the wagon diagnosed he had asthma and a weak heart. Because of his shortage of breath daddy generally sat on the lower bunk bed. However, the previous night, he hadn’t  slept as it had been his turn to tend the stove ensuring it stayed lit, so being tired, he climbed to the upper bunk to have a nap. Before he settled down he asked me to get him a drink of water. When a few minutes later I’d managed to procure some, I asked my sister Władzia to pass it to him – he was already dead. In this situation we reached Orsk where daddy was taken from the wagon to be buried we know not where. When mother found us, she had no idea what had happened. She stared at the vacant space on the lower bunk and sobbed her heart out. She also wanted to go looking for the dead body but our friends forcibly prevented her from leaving.

We arrived in Bukhara and mummy heard of the orphanage for children in Kagan so placed us there. She visited us each week. We assured her that it was definite that they would be taking us to Persia, so that evening she returned to Bukhara to collect what remained of our possessions, with the intention of returning to Kagan next day, but she didn’t find us there. We never saw her again.

We travelled with the orphanage via Krasnovodsk across the Caspian Sea to Pahlevi and then Teheran. Lessons were organized at once but I have only a hazy idea of this, because I was repeatedly sick and was taken to hospital, as it appeared that I had typhoid.

In Teheran brother Staś joined the junior cadets and my sister and I went on to Isfahan. In 1942 we were transferred to a temporary camp in Ahvaz and a few weeks later to the transit camp in Karachi. This camp was under direct British control. Here people awaited onward transport to either Africa, Mexico or India. My sister and I were sent to Malir not far from Karachi where we lived in ex-army barracks.

There were no trees on this camp and the desert sand was blown into our mouths and noses. There were many scorpions, poisonous snakes and nasty insects, but despite the primitive conditions, education was organised for the children. The head of the orphanage and also a teacher was Olga Sasadeusz.

In June 1943 we were taken to the new settlement of Valivade where I was one of the 410 children in the educational establishment. Later more arrived from Balachadi making over 600 of us – mainly complete or half orphans. Again the Principal was Olga Sasadeusz. The children were well nourished and were assured of genuine care. The weaker ones received special supplementary diets and those sick with lung complaints were usually sent to the sanatorium in the mountains at Panchgani.

When I first went to Valivade in 1943 I was put in the 6th form of the Junior School but I later passed an examination for the grammar school. I acquired my secondary school Certificate in 1947, the same year as India acquired her independence and Hindus went through deep mourning following the assassination of Mahatma Gandhi. It was around this time that the Valivade settlement was being closed down.

In March 1948 my sister and I arrived in England and joined up with our brother Stasio, whom we’d last seen as a boy in Teheran. England became our second homeland. Here I married and had two daughters, Grażyna and Bernadette, and four grandchildren. My sister also married and has a son and a daughter, but brother Staś emigrated to America and is still a bachelor.

In 1993 Władzia visited Karłowicze. Almost nothing remained of the osada, there were just ploughed fields. Our house had been moved to another location and stood abandoned, overgrown with bushes.

How strange are the ups and downs of human destiny. 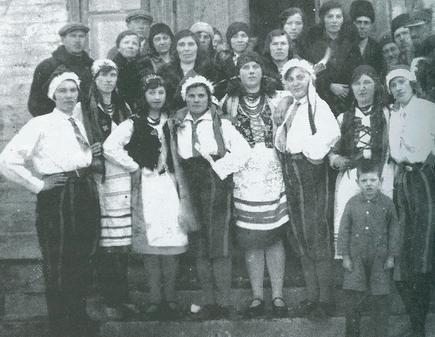 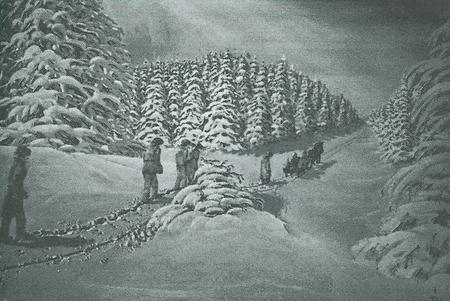 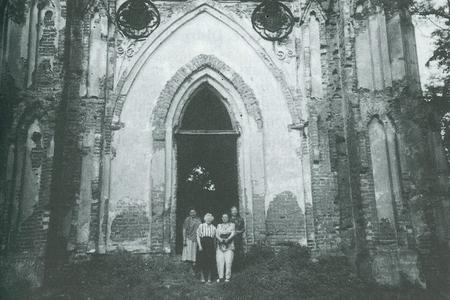 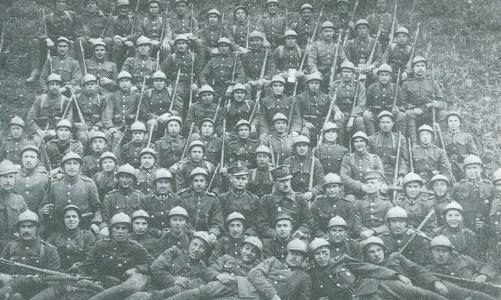 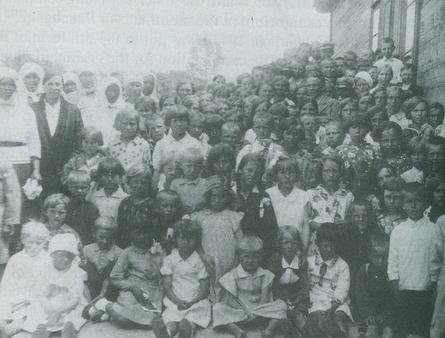 Third row from the bottom, second from the left -

On left, dancing group of settlers and their wives from osada Karłowicze