It was located 10kms from Arusha at the foot of Mount Meru. By the time we arrived, the Poles had already built a church, three junior schools and one grammar. Within a year or two, they opened a Commercial Grammar, a School of Tailoring and an Agricultural College as well as Schools for Mechanics and Music. Thus, after completing our junior school, my entire class was directed to the newly-opened School of Mechanics. The Director who also taught was engineer, Feliks Dutczak. In most cases those who graduated began practising as auto-mechanics in Arusha, Moshi and Nairobi. A decade later, they had spread across different countries and continents and some of us had started our own businesses.

On the Persian soil of Pahlevi, there took place a huge march of the Polish Army and boy and girl cadets though I can’t remember who took the salute. To the accompaniment of the band, this seemingly endless column marched past, company after company. The hearts of the six companies of cadets which marched at the rear were bursting with pride.

During those first days of freedom, some people tried to acquire more food then that was available from the military kitchen. This was possible despite the modest pay given to cadets because there were lots of Persian pedlars near the camps. They shouted out their wares, "Boiled eggs and raw eggs" so that even now such foodstuffs trigger memories. 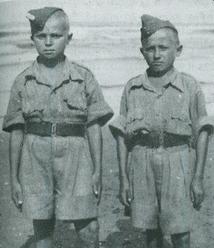 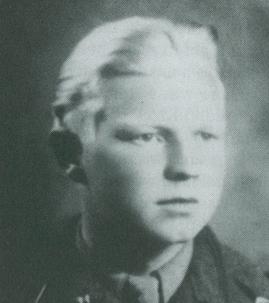 The 10 February 1940 marks the point of deportation from the family home and the start of wandering across the world. I don’t know whether it was a twinge of humanity on the part of the NKVD man that we were allowed to take quite a lot of food and clothing with us but the provisions certainly helped during our three-week journey as well as during the time later when we arrived at our destination. During the journey, the prevailing atmosphere swung between depression and resignation to cheerful optimism: a sort of "What the hell! Soon we shall return.” Only God himself knows from where such optimism sprang.

At the beginning of March, we were brought to Tayshet in Irkutsk Province. About 40kms from Tayshet were four villages – Kvitok, Toporek, Udachna and Zolotaya Gora – in which the whole transport was deposited. The majority of families from osada Jodańce were placed in Zolotaya Gora which at that time was already a recognised centre of the timber industry. Its former residents, and most likely its builders, were moved out just before our arrival. Because of the type of camp it was, we guessed that they were Gulag convicts. Our work consisted of felling trees, trimming off the branches and, with the help of a horse, delivering the logs to the saw mill, where they were shaped into railway sleepers. Positions of administration were in most cases held by Poles but, to the very end, key positions were retained for Soviets. In the canteen, for example, the entire staff was Polish, from the chief cook to the cashier who, by the way was an extraordinary beautiful young Pole called Poniatowska.

Children between seven and 14 were required to attend primary school. Those slightly older worked in what was known as the ‘Boys’ Brigade’.

The commandant was named Kozarin and his closest associates were all members of the NKVD. Should one absent oneself from work or even turn up late for any reason at all, there were investigative courts and fines. Wages varied according to different quotas which few people could accomplish. A ghastly fate faced those many families with young children where only one adult worked. To survive, whatever could be sold was sold. Some people, however, received parcels from Poland right up to the day of the outbreak of war with Germany. The very severe winters, very inadequate nourishment and almost non-existent medical care meant that in a relatively short time the cemetery was carpeted with Polish graves. My younger brother, Stasio, joined that number having died from dysentery. Other additional plagues were the blood-sucking bed bugs from which there was no escape and swarms of tiny flies from the bites of which hands and faces became swollen. Accordingly, curses were heaped on flies, bed bugs, lice and the whole political system. We remembered better times and, like the Jews under Egyptian bondage, longed for all that had been snatched from us. Most of all, we pined for our family home where there was never shortage of bread and something to go with it, and for a life of freedom known from  birth as well as many other things.

I can recall one incident in the Soviet school. During the lesson, a girl sighed "O, God". On hearing this, the teacher shouted, "There is no God and what Gods you had are now playing fast and loose". Yet, this same teacher, despite her anti-religious prejudice, in her own peculiar way actually liked us.

The difficult situations which now faced people forced them to adopt new ideas. For example, when the soles of shoes had fallen apart, new soles were cobbled from wood and found to be more practical.

When we first heard of the amnesty, we were somewhat incredulous. Some people suspected that the NKVD were up to something, particularly since only a few weeks earlier a political discussion amongst 16 of our young men reported to the commandant by their group leader (I’m ashamed to say, a Pole himself) had resulted in their being led away, handcuffed, by the NKVD, never to be seen again.

Yet the bolder and braver amongst us and those who could afford the expense did begin drifting off towards Tashkent where the available information said a Polish Army was being formed and where there was supposed to be a Polish government representative. My parents were among those who decided to leave. Out of the flour we had hoarded from the collective, mother baked quite a large amount of bread. This, cut into pieces and dried, constituted almost our single item of food during that long journey south.

This time, however, we travelled buoyed up with hope for a better future. Furthermore, our interests were stimulated by the different exotic national costumes we saw worn by people from Mongols to Uzbeks. It was to the latter that fate moved us as we awaited the final outcome of negotiations between our authorities and the Soviet government. After a long period of bargaining, we and a few others were accepted on the Bartak collective farm. The typhoid raging there didn’t spare us but, as a family, we had the luck not all to be ill at the same time. One Polish couple, for example, both died during the same night thus, like thousands of their compatriots, they remained in that Uzbek cemetery ranged over by jackals. Following the typhoid, our appetites were indescribable but there was simply nothing to eat. Some used to kill tortoises with its highly-prized meat. We chose to eat the leaves and roots of unfamiliar vegetables pointed out to us by the local people, plus anything we could get in exchange for our few last rags.

It was in the early Spring of 1942 that, from the Polish centre in the regional town of Cherakchi, we received news of departure to Persia. The qualification for inclusion in this departure appeared to be the membership of someone from the family in the Polish Army whilst in the USSR. Father’s state of health disqualified him from military service but, as luck would have it, boys born in or before 1928, were offered a chance to join the junior cadets in Kermine, so my brother Władek and I took that opportunity. We said goodbye to our parents and, with a number of other boys, went off to Kermine where there was already quite a gathering of youngsters from other locations. The life there, under military discipline and command, was almost to the standard demanded from the army for fit young men. The daily drilling on that rocky, sandy desert has stuck in my memory, as have the marches with our singing along the river into the currents of which we dipped ourselves as we sought its coolness from the scorching heat. On the other hand, the nights were very cold. We slept under canvas with nothing between us and the ground. Only after we were sent to Narpay some seven kilometres away were we issued with full English uniforms and blankets for sleeping.

The first Cadet School to reach battalion strength was formed in Narpay. Its head was Major Krzyżanowski. In Narpay, we were visited by General Anders – the Polish Moses, to whom so very many of us owe our salvation. We also had the privilege of meeting Bishop Gawlina, by whom many were confirmed. Compared with Kermine which many dubbed ‘the Polish cemetery’, Narpay is engraved very positively in my memory.

Our hour of freedom on the clock of history came in September. For the journey, each of us received an army greatcoat and a haversack full of English chocolate. For the last stretch of the journey to the ship in Krasnovodsk, we marched right through the night.

In one of the civilian camps in Pahlevi, I visited my parents who, with God’s help, had managed to flee the Soviet Union. After a few weeks in Persia, we were moved to Tehran where an ear infection causing a stay in hospital took me off the roll of cadets. During this time, my brother, still with the cadets, left for the Middle East and for quite a while my thoughts were with them haunted as I was by longing. In Tehran, my father was accepted into the army and my mother and I spent the winter in Tehran, like thousands of others free but still exiled from our homes.

Our next port of call was the Ahvaz transit camp on the Persian Gulf. We were there from Spring until halfway through summer when followed a further journey. This time to Africa and Tengeru in Tanganyika, the biggest refugee camp for Poles in Africa.

As for the priests who served the camp, the foremost worthy of remembrance was Father Jan Śliwowski. He arrived from America, having paid his own way, just to serve his compatriots. His sermons assembled so many believers that the church was always full.

At the conclusion of the war, we were all very disillusioned with the political situation in which Poland found herself. My father died in a military hospital in England. Mother and I arrived in England in 1948 meeting up with Władek after a five-year separation. As we worked for our daily bread, there started a new chapter of our life in a strange but, for us, friendly country.

Back to the Introduction Page 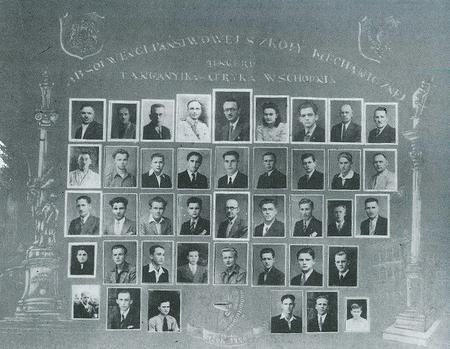 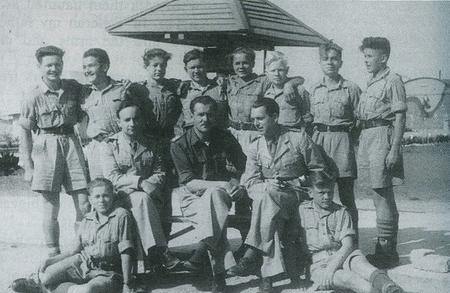 Graduates of the Mechanical School in Tengeru. 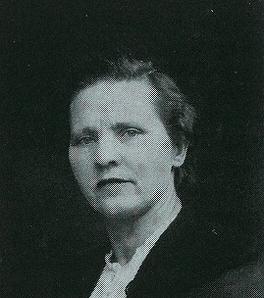 Henryk Madany on the left, near the Caspian Sea, Pahlevi, 1942.

Władek Madany (third from right in back row) 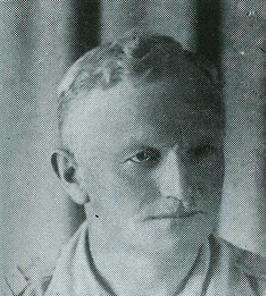