This humble reminiscence I dedicate to the memory of my parents, Józef and Maria Ćwirko.

​
My parents, Józef and Maria Ćwirko, came to osada Kuchczyce from Kaczanowicze near Nieśwież situated as it was alongside the strip of land bordering the Soviet Union. When as children we went during the summer holidays to Kaczanowicze, we saw the Soviet soldiers and dogs of the border patrols. At that time, we had no idea just how great a danger threatened us from that direction.

The osada stood south west of Kleck, separated from us by the River Łań. The river flowed by the edge of the osada and was not the only picturesque element in the landscape but a favourite place for games and bathing. On midsummer night, we floated down the river wreaths decorated with burning candles, the lights from which gleamed in the water late into the night and were multiplied in the reflections upon the water.

Near the osada, there was also a forest called Starzyna. I don’t know how it got its name but it also featured strongly in our games and walks as it was a mixture of trees and clearings.

There was a stony track which went across the bridge over the river and led to Kleck about 2 kms from the osada. On the other side, the road went on to Siniawka. There, the terrain was rather flat, but still picturesque with riverside meadows filled with flowers. Here the agricultural land was rather good.

It was each settler’s desire not only to cultivate the land to its best agricultural potential but also to present his farm with the best appearance. This spontaneous rivalry was not only an expression of attachment to the land but a form of gratitude. There was much patriotic input in this vigorous, pioneering culture instilled very strongly in each of us, born as it was from the military liberating ideals of our parents. The closeness of the Soviet border only added to the settlers’ activities and spirit of patriotism.

New farm buildings sprang up as fast as mushrooms after rain. Livestock was increasing and, each year, our lives increased in comfort despite the many scarcities. Alongside the development of the cultivation of grains, there also developed fruit farming and the breeding of domestic animals. Apples were of a fine quality and it was possible to preserve them until spring. There were also Morello cherries, red cherries, plums and other fruits. All this, the corn and other things, was taken to the market in nearby Kleck.

There markets were held twice-weekly and drew people from the town itself as well as the area around it. Kleck had about 5,000 inhabitants the majority of whom were Jews engaged in commerce. There was also a significant number of Tatars and Belorussians. The town contained a very old, monumental church scarred by gunshot from the time of the Swedish invasion, a synagogue, two Orthodox churches and a mosque. In spite of these different beliefs and minority groups, life in Kleck was always very harmonious and peaceful. The centre of knowledge and creator of future friendly co-existence was the seven-form school attended by some 700 pupils drawn from all the different nationalities and beliefs.

My sister Irena, our younger brother, Henryk, and I attended that school. It was built close by the old church. It was a single story structure of wood with a very large well-equipped gymnasium and sufficient rooms to have separate classroom space for all 700 pupils simultaneously. Near the school, was a space for games and recreation. Kleck also had a very old interesting market square right in the middle of the town but really more in the shape of a rectangle from which streets radiated out rather like extensions to its sides. This is where the markets were held.

At the farther side of Kleck a unit of the Corps of Border Guards was stationed. Though this wasn’t all that big, it contributed much to the lives of the inhabitants of Kleck and Kuchczyce. The army took an active part in all the functions and festivities and its presence gave us a feeling of security. Each Sunday the army, dressed in their parade uniforms and led by their band, marched to church for the 9 o’clock mass. This mass was also attended by the school children for whom the soldiers and their band was a special attraction.

One of the annual delights in Kleck was the harvest festival celebration. This was a holiday prepared for with much effort and taken part in by the entire population: various organisations, the schools, and, of course, the army with its band. Arrangements for the festival always began a few weeks beforehand for, besides the beautifully-arranged harvest exhibits, there were all sorts of other spectacles, shows and games. The school children for example, competed in the singing, collective and individual reciting and dancing events. Their performances were greeted with plentiful applause. There were also shows organised by the ‘Krakus’ members who displayed their skills and mastery of horsemanship. The festival was not just an occasion for games and entertainment and the official acknowledgement by prizes for the distinguished accomplishments in agriculture and civics but a genuinely popular festivity irrespective of age, ethnic background or religious attachment.

Though the harvest festival was a holiday with a very particular character, it wasn’t the only happening of its kind. All national and sacred anniversaries were celebrated ceremoniously and always involved the army, the schools, the organisations and the general public. Most of our life on the osada centred around the farm but not exclusively so. We were also organised socially. One of the farmhouses was used as a nursery. This was a tremendous help for those whose work in the fields was regulated by the necessities and requirements of nature and not by set times.

There was a Housewives’ Circle which had a lively programme concerned with everyday requirements. Its subjects for discussion and debate were not all allied to farming and advice but included seeing to the actual happenings to and needs of individual settlers. There were also meetings of the actual settlers themselves called together by the village administrator who was elected at a general meeting. During the time my father held that position, it was my duty to inform everybody of the time and place of those meetings which were generally held either in the home of the administrator or another of the members. Because of this job, I was jokingly known as the administrator’s deputy. The result of discussions, decisions, plans or farming requirements of the osada were conveyed to the local community administration in Kleck.

There were also occasional neighbourhood meetings arranged. Most of these revolved around religious or family occasions. Such events, or indeed spontaneous gatherings, developed a feeling of solidarity with and sensitivity towards the concerns and requirements of each settler. As the need arose, there was always someone willing to visit the sick or provide a helping hand. The character of a settler’s life created a natural need for communal meetings, be it social or friendly.

Our life was expanding actively and harmoniously until the arrival of September 1939. In the near future, Siberian exile with the cold, hunger and lack of humanity awaited us. This part of our story is a completely different page of our reminiscences. There, in the depths of Siberia, we came to know what it is to suffer from hunger, the cold, inhuman treatment and the work of heavy slavery. We fell victim to illness, cold and hunger, were persecuted by the NKVD and were in a situation where human life was considered worthless. This inhuman fate, coupled with the strength-sapping demands of felling the forest and floating the timber, made us acutely aware of how immense was the difference between what we’d left in our homeland osada and what we found in Siberia.

When, as a result of the German invasion on the Soviet Union, and amnesty was declared, a new hope was kindled, together with a desire to leave. We discovered that in distant Kazakhstan in South Russia a Polish army was being organised. To there we directed our steps alongside other families and crowds of refugees drawn from all parts of Russia in the hope of joining that Polish army and escaping to freedom. Not all were so lucky. Thousands of us fell from cold, hunger and illnesses. A huge mass of refugees never managed to escape from the Soviet Union. Those who did manage to reach Kazakhstan left behind two years of Siberian exile. A new destiny scattered us, now in uniform, across other parts of the world and to the fate of soldiers.

My parents and my older sister, Irena, managed to reach Italy, where they went through the 2nd Polish Corps campaign. The youngest, Henryk, and I found ourselves in England, Henryk as part of the Cadets and I in Scotland was included in the 1st Corps of the Polish Army. After five years’ service in the Women’s Auxiliary Service, I settled in England where I lived until 1983. After my husband’s death, I emigrated permanently to Canada so as to join the rest of the family which, after a ten-year sojourn in Argentina, found themselves in that country. My parents died and are buried in the military cemetery in Montreal. We still live in that city – the three of us – sister, Irena, and her family; brother, Henryk, and his family; and I myself.

The family of Józef and Maria Ćwirko pn the osada Kuchczyce. 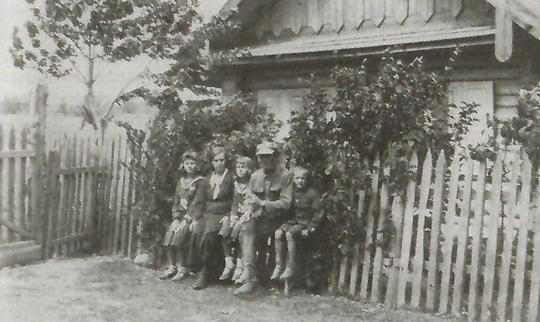