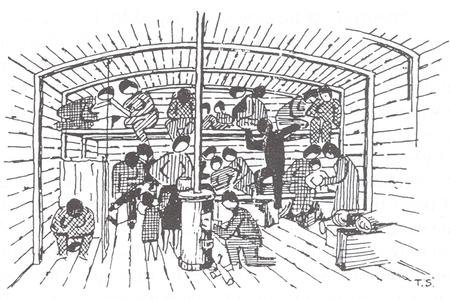 My father, the sergeant major legionnaire, Paweł Salamończyk, acquired his holding, plot No 13, in Jatwiesk. The legionnaires arrived to find virgin land and initially settled with Captain Wojnarowski in a small mansion. As time went by, they began to build their own houses and brought their wives to join them. Father married Zofia Dałek from the Łowicz district. He also brought his parents over and an unmarried sister who later married Mr F. Borkowski, a friend of father’s from the same osada. In the district were four other osadas: Karczówka, Jakuszówka, Rożki and Narutowicze. In our osada, there was first a four-class which grew to a six-class school. The teacher was Mr Hłasko but he was transferred because of his communist leanings. The next to teach us were Mrs B. Szweda and Piotr Pajkowski. We owe Mrs Szweda a lot since she was a good teacher who taught not only the essential subjects but such crafts as sewing and drawing. In the school, we had a very small shop. We learned national dances and played rounders. Just before the outbreak of the 2nd World War with my three friends – Wanda Śmigiel, Gosia Abramajtys and Lucia Głowienko – I passed the entrance examination to the grammar school in Świsłocz. Heniek Traczyk also attended the same grammar school.

There were three children in our family: myself, Sabina, born 1925; Jan and Regina (now Mrs Wojciechowska). Our grandparents lived with us.

On 10 February 1940, the whole family was deported to Karabash near Chelyabinsk in the Ural mountains. At the time of the family’s deportation, I was at school so they came there to get me when father informed them where I was. I was told to put a coat on – I only had my uniform and that coat – and they put me on the sledge. I was very frightened as I had no idea where I was being taken. In fact, it was to the railway station where I joined my family. My school satchel containing books remained in my desk. Thank goodness mummy packed some of my things. In Karabash, father and the other settlers worked in the copper mine. Mother who worked on shifts was employed loading wagons. Granny busied herself with the very meager housekeeping as there was nothing to buy. Just to keep us alive, our parents got rid of different possessions. They even sold their wedding rings. Father had an accident in the mine where he broke his leg and didn’t work for some time.

Amnesty arrived. Travel was made possible. Everybody talked of the organisation of a Polish army in the south. Mother dried bread for our use on the road and we set off, having somehow managed to acquire places on a transport, so that after three weeks of a journey, we reached Tashkent. The next episode was on the ’Petrovka’ collective farm. It was a Soviet institution and it was there we spent the winter. With us were the six people of the Ranosz family. In the Spring, we moved to Chok-Pak. Father joined the army; I, the girl cadets, and we moved to Guzar. My mother, sister, grandma and grandad were in a civilian camp and my brother in hospital. It was here that granny died of dysentery. I went with a group of girl cadets to Kitab. Then on the road, more specifically on the shores of a free country by the Caspian Sea in Pahlevi, my grandfather died. I quit the cadets in Tehran because both my mother and sister were ill and my brother still in hospital.

A departure day to India had already been fixed when I became very sick with acute bronchitis and found myself in hospital. Upon my recovery, we were given notice for departure to Africa, our destination the Koja settlement in Uganda. Here I attended grammar school and it was not until 1948 that the whole family met up in England, my father and brother having already arrived with the army. All settlers from osada Jatwiesk i.e. Salamończyk, Borkowski, Gąsiorowski, Traczyk, Wieczorek, Pawelec, Wojnarowski, Niewiarowski, Hardonin, Hartman, Ranosz, Kuczyński and Stankiewicz, suffered the fate of exile.