I am the eldest daughter of the four children of Leon and Konstancja Krajewski from osada Rogoźnica Mała in Wołkowysk district.

As a young volunteer my father fought in the Lithuanian-Belorussian Division commanded by General Żeligowski. Risking his life, he twice escaped having been taken by the Soviets as a prisoner of war. For his part in that war, under the decree of 17.12.1920, he was awarded land in osada Rogoźnica Mała which lay close to the village of the same name. There was a primary school there and, on the nearby Meysztowicz estate, a small church built in 1925 at the entire cost of the settlers.

There was a number of osadas in our district. The settler’s life was not easy. Alongside their cultivation of the land, they had to build houses and start families even as they incurred debts. The majority of the local Byelorussian population was quite friendly and often benefited from the settlers’ help and advice. Yet there were communists among them as well. Despite the difficulties, the different societies flourished and my father was the chairman of the association of former military volunteers.

The new débacle of 1939 changed all this. Father was mobilised then, with his unit, was captured by the Bolsheviks. He returned after two months but on 2 January 1940 was arrested by the communist authorities and imprisoned in Wołkowysk. We never saw him again. He was then just 40 years old and all trace of him disappeared for ever. On the other hand, we as a settler’s dependants were deported on 10 February 1940 into the depths of the Soviet Union.

Squashed together and petrified, we travelled in goods wagons for three weeks. We were assigned to posiołek Shompozero near the White Sea in the Onega district of Archangel Province. Mummy was employed as a tree feller and in winter did this standing in snow to her waist and in summer as a haymaker. As the eldest, I took care of my brothers and sisters.

This remained the state of affairs until the outbreak of the German-Soviet war when we were told we were free and could travel wherever we wished. The real truth was somewhat different. After a few days’ waiting by the fires in the forest, we travelled in a goods wagon but this time for seven weeks. We lived on whatever we could get hold of or beg on the railway stations. In the end, we were employed on a collective farm in Kazakhstan gathering cotton.  Here typhoid fever raged and it wasn’t long before mummy and two of us older ones found ourselves in hospital. The younger ones were placed in the orphanage because by that time Polish centres had already been created. Thanks to God’s mercy, we ourselves were saved. There are many Poles who remain there in their graves forever. After succumbing to typhoid, the regaining of one’s strength was very difficult and thus our ability to grind the corn we brought from the Polish centre on the Kazakh hand-mill. However, somehow, we survived and in time the whole situation changed. It was an accepted fact that all the Polish families were to leave for Persia following General Anders’ army. An officer arrived to accompany the children and some families. Again, we were subjected to long periods of waiting with our bundles.  This time in a sandstorm.

After different experiences, we found ourselves on a ship in Krasnovodsk from where we sailed to Persia across the Caspian Sea. There, on the shore in Pahlevi stretched out human skeletons.  Dysentery prevailed. Yet God, once again, came to our aid. Once disinfected and dressed in clean clothes, we moved to a clean sector and were soon taken by military lorries along the hilly, winding roads to Tehran where a new life in a transit camp awaited us.

After a few months, we left Tehran for Ahvaz on the Persian Gulf and from there to other camps in Karachi and Bombay.

I remember 8 May 1943. Another 150 miles stretched before us by train to the Valivade refugee camp in the Kingdom of Kolhapur in India. We spent five years there. It held about 5000 people: mainly women and children. There was a church, a hospital, primary schools, a grammar school and an orphanage. Cultural life began to emerge. The young went to school and joined various lay and church organisations. Scouting was high on the list.

Then at last the war ended and our stay in India drew to a close. As there was no free Poland, only a mere handful chose to go there. We were hospitably accepted in England.

Now many years have passed during which my mother died. I myself have eight grandchildren already and yet I still in my mind go back to the land of my childhood. My brother has visited where we came from, now in Belarus. Nothing of us and those years has remained. All the osadas have been razed to the ground. No one knows where our home once stood. I’ll close these reminiscences with words from my father.

My soul will sing your glory.

As soldiers defend their homeland, it will guard
Those grey, misty Eastern boundaries. 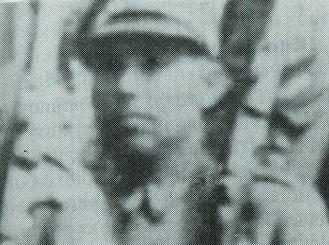