We were all deported north on 10 February 1940 to different places. Our family consisted of seven people. My brothers Józef, Leon and I were put to work as adolescents sawing trees into sections, building dwelling houses or floating timber already felled. We lived by the Severnaya (North) Dvina, on posiołek Dyabrino in Archangel Province. I suffered from severe anaemia which caused dizzy spells and one of these, whilst I was working floating timber, caused me to fall into the river which ran seven metres deep at that point. I don’t recall the sequence of events other than feeling the draggingly heavy weight of my thick coat in the water and know that I regained consciousness very quickly. Since I was so rapidly alert, I held my breath and the water buoyed me up to the surface. Almost at once, I heard a voice yelling, ‘Give me your hand’. Maria Leszkiewicz and a Russian man heaved me onto a footbridge and, in doing so, saved my life.

Mummy suffered a terrible experience. This happened on her way back from the collective farm with a sack of potatoes.  While still a few kilometres from home, she lost her sight because of night-blindness. Hopelessly fighting her way through the snow, after a while, she heard someone questioning her as to where she was heading.  She replied that she could see nothing. This kind man guided her home holding her by the hand. Had it not been for him, she would surely have frozen to death.

We also went through another tragedy.  As we made our way south, my 9-year old sister became very ill with measles and pneumonia. Sending her to hospital would have meant parting from her forever. So, with no way of treatment available, mummy simply wrapped her in a feather bed and, upon any inquiry if anyone present was ill, she replied in the negative.  When we reached Uzbekistan, Frania looked more dead than alive and it was generally thought her death was imminent.  Yet God has kept her alive up to this day.  She has both a family of her own and grandchildren.

My eldest brother, Bronisław, joined up at the formation of our army. When the chance of leaving Persia occurred, as a loving son and brother, without obtaining permission from the military authorities, he walked the 25 kms to take us to Lugovoy, just to save us. Rather than reprimand him for being absent without leave for 24 hours, his commanding officer commended him for his action and behaviour. We were rescued thanks to Bronek. Unfortunately, he passed away in the 58th year of his life. My parents are also dead. I remain with my sister, Frania, and brothers, Józek and Leon.

After all these experiences, we came together generally unscathed in the hostel at Daglingworth.

The entire family in England 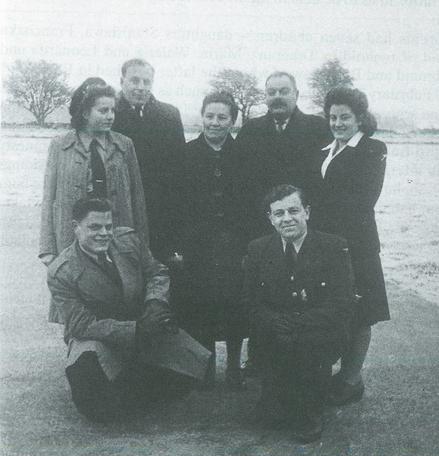