My father, Jan Przysiecki, son of Jan Przysiecki and Józefa (née Spychalska), was born on 23 July, 1894 in the village of Wolica, rural district Wjenice. After the First World War he moved to Wołyn where he received land in osada Serniczki. There he married Helena Polic where they lived up to the outbreak of World War II. He worked very hard to build a dwelling house and set up a farm. In order to be able to till the soil, he had to fill in former battle trenches.  My parents had seven children – daughters Stanisława, Franciszka (who died of typhoid in Teheran), Maria, Waleria and Leonarda, and sons Edmund and Bronisław of whom the latter perished in Russia. 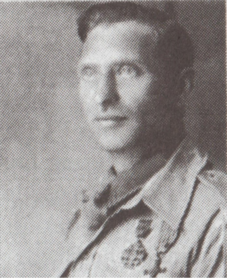 On 10 February 1940, with other settlers such as the Gugała and Tymiński families, and some whose names I don’t recall, my father and his entire family were deported to Siberia. In Russia he toiled at felling trees and loading them onto trains. The whole family left Russia following the amnesty. After an interminable train journey with frequent hold-ups on sidings, hiding in shelters during German air raids, and travelling on foot where bombardment had destroyed the tracks, we reached Pahlevi and were taken from there to Teheran. Here, under the protection of Polish organisations, we enjoyed better conditions, loads of food and readily available health care.

In Teheran father, still being of military age, joined the Polish Army. After a short stay there he left with his unit for the Middle East. From that time we didn’t see him until after the war when we arrived in England in 1947. He had fought at Monte Cassino.

The rest of us left Teheran for East Africa, the Masindi Camp in Uganda. We arrived in England in 1948 so it was in fact six years before we met up with father. That meeting is difficult to describe, being a mixture of joy and tears. He didn’t recognise us because those few years had seen each of us grow into young women. I remember a wonderful episode when after our arrival in Cirencester he took us shopping in town. He made sure each of us had good clothes, because we wanted to look nice. From our settlement in England, first in Leeds, Yorkshire, we have all married but most still live near each other.

Because the English climate didn’t suit my sister Leonarda’s daughter Elizabeth’s health, the family emigrated to Australia. From my parents’ seven children, there are now 10 grandchildren and 14 great grandchildren. One of these, a teacher of mathematics and a computer expert, now lives in New Zealand. Two more of the male grandchildren studied medicine and are now specialist consultants in haematology and care for patients suffering from cancer and leukaemia. When mother suffered a stroke it was father’s wish to go and live in the Polish Old People’s Home at Penley in North Wales. There, in capable hands, they lived for a few years able to eat Polish food and speak the Polish language. Although they both died there, they are buried in the Polish section of the cemetery in Leeds.