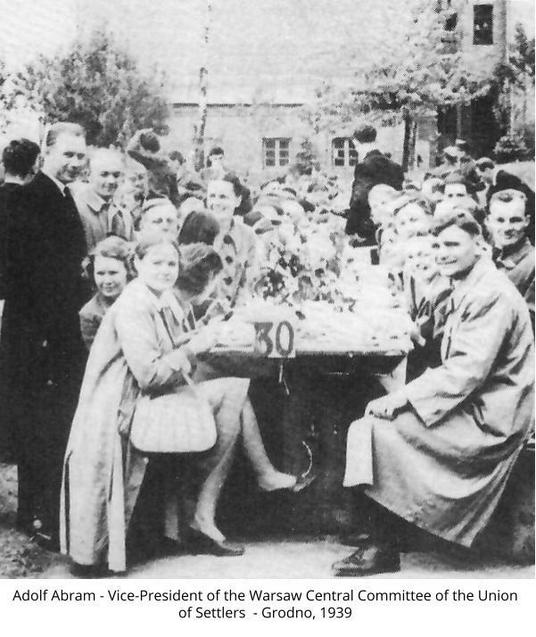 I met my husband Bronisław in 1923 through my brother, Stanisław Misiarz, an osadnik from Orłopol. I arrived from the Kielec region, to help my brother set up farming on his plot.

My husband was a supporter of Piłsudski. He came from the Wilno region and as a young soldier he was a German prisoner of war. For his participation in the battle for Polish independence he received a 14 hectare plot with very fertile soil. But he did not know much about working the land, despite coming from an estate, and his first working years were very difficult. After our wedding in the Kielce region we went to visit his parents from whom we received some linen as a gift and this was our only property at the beginning of our struggle on the osada. How different our life was a few years later!

Osada Wola Korbutowicka consisted of 48 plots, and the neighbouring osada Orłopol had 80. It had a school with 6 classes and a community centre, which was constructed thanks to the generosity of the settlers and partial funding from the government. Six teachers worked in the school. The community centre had a shop, a common room (Świetlica) and a large hall with a stage, where plays and various public celebrations were held. Living quarters for the teachers were also located here.

Social life in the community centre and the school was very active, which greatly surprised visitors and representatives of the authorities.

Initially, life on the Osada was very difficult and hard but after a few years of increased work it became lighter, more interesting and full of satisfaction. The settlers went to church in the nearby Wiśniowiec, a town historically linked to the Wiśniowiecki princes.

Many Ukrainians lived around the Osada who had various relationships with newcomers. Some were even good neighbours from whom one could borrow farming equipment and count on their help in the field or home.

With time, the settlers could take loans to buy their own farming machines which greatly eased their work on the plots and gave better results with harvests, at the same time raising the standard of living for the settlers, who tried so hard to establish Polishness in the Kresy.