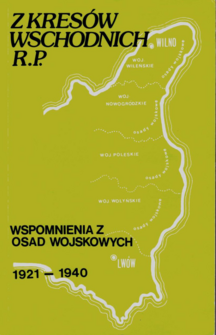 My father, a soldier in Piłsudski's First Brigade, and his wife Anna, née Gryglik Górska, my mum, were natives of Łomża. They came to the eastern part of Poland in 1921, when my father was given a plot of land in the Adampol settlement in the Niechniewicze municipality. It was a plot which came from the division of the Zaolesze estate. I don't remember the size. The meadow was far from home, in a very picturesque basin of the Niemen River. Children had to be deserving for Father to take them on a haymaking trip. It was almost like a holiday at the seaside today. Unforgettable colourful flowers and the smell of dried hay stay with me forever. The big plus of our settlement was that there was a hostel for orphan boys. It was a rather large red brick building, three storeys high, with its own dynamo which produced electricity for the lighting. It was surrounded by a large orchard which was leased by the Jews during the season, and where we used to go to get apples through the holes in the high fence, even though we had enough apples in our own orchard. Fond memories from our “puppy" years.

Next door was a smaller, white two-storey house where the teachers' training school was located. As far as I can remember it was no longer in use under the new school system. I know from my parents' stories that some of the settlers had lived there before they were able to provide themselves with a roof over their heads, and it was there, at the end of 1922, that I was born as the first daughter. There were four of us at home; my brother was three years younger than me; my sister Wandzia was five years younger, and my sister Irenka was 14 years younger. I know from my mother's stories and from my own observations, that life and farming in the village was very hard. But a few good years before the war, things were almost good. We already had a nice big house, which after we left for Siberia, the Belarusians turned into a village hall. The house that my parents built in their early years on the plot of land also remains in my memory. It was a long building, half of which was living space, and the other half was stables and pigsties. I remember clouds of flies, for which even toadstools did not help much.

In the aforementioned hostel, there was also a four-grade public school, which was also attended by the settlers' children. It was not too far away, but in the winter, the children had to be accompanied or driven through the snow-covered fields. In the summer we went alone. The seven-grade school was in Niechniewicze, 6 km away. It was a small town with a church, an administrative centre, a co-operative, a dairy, fire brigade, and a local Farmers’ Wives Association. Just outside the town, in a nice semicircle, stretched the nearest neighbouring settlement, Niechniewicze, where my school friend of later years, Stefa Wdowczyk (married name Kacperek) lived - now a member of our circle - "Ognisko". There was also an agricultural college in Niechniewicze. I remember that when I went to school in Niechniewicze, our class went there for drawing lessons. We had to draw some tools. As I had no talent for drawing, I asked a friend from the village, Maniuś Garstka, who drew and painted beautifully, to draw for me, but he refused. I then drew a rake by myself, which the whole class laughed about later. The aforementioned friend later studied at the Technical School in Vilnius, and I think the war caught up with  him there.

I must add that it was a long way to school in Niechniewicze - 6 km. We also had to pass through a Belarusian village called Popławy, probably because a stream (sometimes deep) flowed through it, in which we caught tadpoles on our way to school. In the winter our dad would take us, but in the summer, we had to walk alone, which nowadays seems unlikely. Today, neighbours would certainly report child abuse to the police. What's more, after returning from school, we had to help our parents by herding cows or harvesting crops.

I also don't remember my parents going out anywhere except to church, name days, or christenings, which were popular in the settlement.

Father had his newspaper "Rolnik Wielkopolski" sent to him which he used to read in his spare moments; these were rare even on Sundays. In the summer, an expedition to the nearby forest was a great pastime with benefits because you could pick mushrooms or berries.

If you were eligible to continue your secondary school education, you would have to leave your family home and live in a dormitory in Nowogródek. Several boys from our settlement studied at the Trade School in Wilno.

Since my parents were building the above-mentioned house, and having a very hard time financially, I continued to attend the seventh grade, but later I and two other friends, Janka Sobieraj, from the Kossowo settlement, and Stefcia Wdowczyk, were sent to the vocational school in Iszczołna. Graduates of this school were future kindergarten teachers or heads of housewives' circles.

It was a long way to my family home. It was a long train journey through Nowojelna and Lida, and then by horse cart to the school, which was on the Lida-Szczuczyn (Nowogródek) route. We lived in the boarding house there, and I still remember how difficult the first months were without home and family. Later, when we were older, coming back by train for holidays was sometimes a pleasant adventure. Unfortunately, the war interrupted our unfinished education. By mid-September, the Russians were already in the settlement. The settlers shared the fate of their friends - arrests, imprisonment, deportation to Archangielsk in gods wagons. Separation from loved ones, often death. Finally, in 1942, we left Russia, free, and arrived in Iran and beyond.

Thirty settlers who had come from different parts of Poland lived in a very remote area of the settlement. Some came with their wives - others married local girls who spoke Belarusian. I don't remember the names of all the settlers, but our neighbours were Michał Szunejko, and his brother Władysław; on the other side: Czekirski, with whose children we went to school, and the childless Mr Dobrowolski. 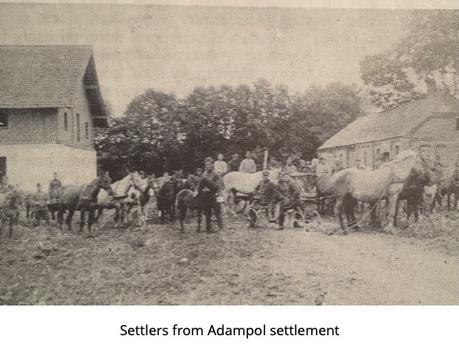