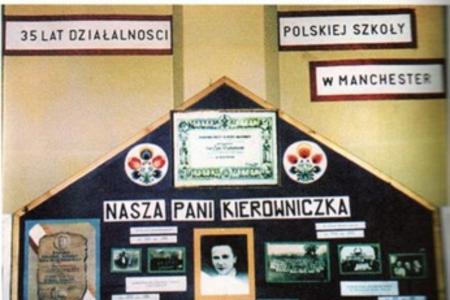 The Łohwinowicze settlement consisted of 12 settlers.  There was no school or church but instead a unit of KOP (Korpus Ochrony Pogranicza - Border Protection Corps), a dairy, Agricultural Association and a Village Housewives Association.

A seven-form primary school was located in Zaostrowicze where Olga Trybuchowska, a settler wife from Łohwinowicze, was the teacher.  As well as running the farm, her husband was the manager of the dairy on his settlement and also fulfilled the role of the settlement Sołtys [Ed. note: The elected administrator].  Józef Rytwiński was the Sołtys for an assembly of four settlements in the District of Nieśwież: Horka, Łohwinowicze, Małe Ostrowczyze, Duże Ostrowczyze. There were 60 farmsteads within these four settlements.

After a harrowing  war experience, Olga Trybuchowska setup home in Manchester, England and until her death in 1986, she worked in education, teaching young Polish people with her whole heart.