During the early years my father had a grocery store in his house on the settlement and, alongside the stables he built a large dance hall, which had long benches lining its walls.  An orchestra would arrive and people flocked to the dance hall but they also came to the grocery store and we, little ones, would hang around these people, listening to what they were talking about.

In 1934, the Krechowiecka school organised a trip to Augustów where the Krechowiecki Lancers Regiment was stationed. I too went on that trip. None of the organisers knew that there was a scarlet fever epidemic in Augustów and the children fell ill. I was probably the hardest hit by the illness. After arriving back home, the illness got worse and I was taken to hospital in Równe.  The fever went down after three weeks and I started to regain consciousness. The illness had taken a heavy toll on me because, during its course, I had completely lost my hearing. My parents couldn’t come to terms with this and so they sent me to Lwów for an operation. When my father came to Lwów to collect me from the hospital, his first question was can I hear?  Tears rolled down his cheeks to my negative answer and, distraught, he left the hospital with me.  I returned to the settlement in autumn of 1934 and, in winter of that year, we moved out to Równe where father had built our new house.

I was only ten years old and had not yet finished comprehensive school so my father sent me away to a school for the deaf in Lwów so that I could finish my education.  I finished it in 1937 as the top pupil but the hearing loss made normal life difficult for me and the path to secondary school was not available to me. I went to learn sewing.

After we had left the settlement, a church was built in Karłowszczyzna, behind the Krechowiecka settlement, of which there was a great need in the military settlements. The nearest church, and a very small one at that, was in Horyngród, to which it was too far to travel.  They decided to get a copy of the miraculous image of Our Lady of Częstochowa for this new church in Karłowszczyzna so that She would protect our settlements in the Eastern Kresy.  A delegation of settlers went to collect this image. My uncle, Jan Piotrowski, was chosen as a delegate of Bajonówka who, at my mother’s request, took me with him.

From Częstochowa to Równe, we travelled on a special train where one of the carriages was a chapel for Our Lady and Queen. Upon our arrival in Równe, a walking pilgrimage set off with the image to the church in Karłowszczyzna. I also took part in it, with my father. This was a much-celebrated event in Karłowszczyzna, gathering large numbers of settlers from the surrounding settlements because the event was of very special importance since Our Lady and the Queen of Poland from Jasna Góra was taking the borderland settlements and their residents under Her care.

I always visited my grandmother and uncles in Bajonówka whenever I could. I was also there in the summer holidays of 1939 and that was where the outbreak of the War with Germany found me. One day, on the evening of 17th September, I was at my uncle’s, Jan Piotrowski, whose plot of land was at the opposite end of Bajonówka. Behind the plot, on the opposite hill, there was a road that I don’t remember from or to where it led.  We saw an extraordinary sight because, in the distance, on the horizon, there was a long line of Soviet soldiers along this road, which had unlawfully crossed the border of Poland, destroying its liberty, disturbing the peace and order of life in our settlements. Having seen this, I returned to my parents and siblings as fast as I could, but it was not to be for long.

There were bunks in the wagons, which were packed tight with people. The next night, the train set out with a sudden jerk and started moving. “Under Thy Protection” [Ed. note: “Pod Twoją Obronę” Marian Antiphon, ancient Gregorian chant hymn] was intonated in the wagon and, with this hymn, under the dark cover of the night, third in a row, we crossed the borders of Poland. Crowded onto the bunks, we travelled the notorious route of the deportees to Siberia, into the immense tracts of inhumane land, to pain, hardships, suffering, and death.

If these reminiscences are of any value
I submit them as a historical record of Settlements.
To pay tribute to my parents - honouring their life,
Which had its share of hardships, troubles and sacrifices.
And on the 50th anniversary of our country being ripped apart,
When those scars have not yet healed.
All honour to Poland, to the Nation and its Soldiers.
Hear O Lord the generations of prayers,
Let Poland be independent again,
And, as before, live in Freedom.                                            1st September 1989

Krystyna Ostrowska has written about deportation from this osada and taken to the same posiołek in Siberia. 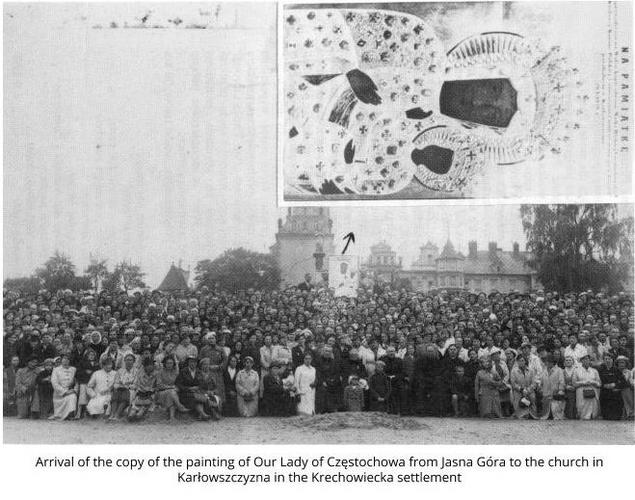