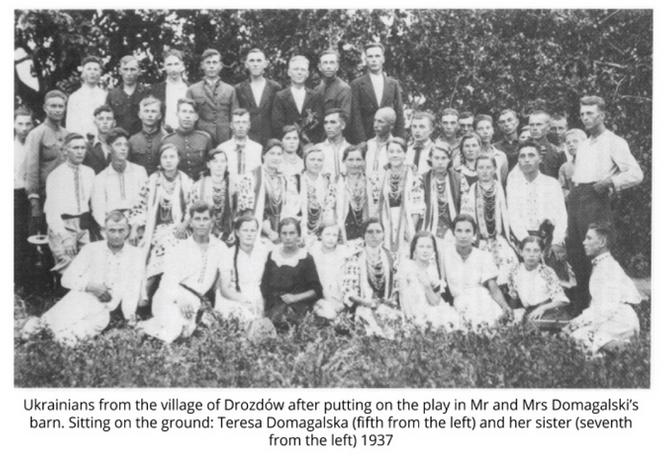 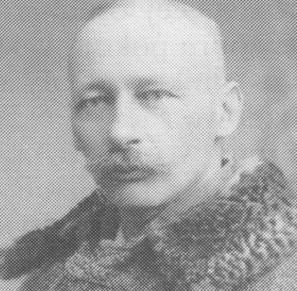 Our plot of land in Drozdów was much loved by our parents and us.

I was born in Równe, in army barracks because at that time my father was in the army, the 21st Lancers Regiment, which was stationed there. He left the army as Colonel W. Anders took command of the regiment from Colonel Dziewicki.

I was baptised in the chapel in Horyńgród by Reverand Jagodziński, at Pentecost because, in spring, father moved to the 110-acre military plot that he was given. One and a half years later, in Drozdów, my sister Alice was born, and she too was baptised in Horyńgród.

Our plot was beautifully situated - on the right bank of the Horyń river, where it was fast-flowing and very winding. The bank on our side was high, about 10 metres, and low on the other side. The meadows stretched for a kilometre, right up to the Dorohoburz hills. The view from our garden was beautiful; through binoculars, one could observe Mr and Mrs Rakowicz’s estate and the goings-on on their veranda. Colonel Kobylew lived with them and bred horses for the military. He would often come and visit us, in winter on skis and in summer on foot, across the meadows and over the Horyń - one of the Drozdów fishermen would always bring him across by boat.

The former manor house of the Longiewicz family was our house. It was very old and right next to the village of Drozdów. Lilac bushes occluded the house a little.  On the other side was an old orchard, a huge chestnut tree and several tall spruces and pines. All of this surrounded the house.

Father managed the plot with a love for the land, as would be expected of any agricultural engineer. He ran a seed farm. I remember how, one year, evening stock was growing under the trees in the orchard for seeds. Its scent in the evening must have spread over the whole area.

The Drozdów settlement was small, with only seven settlers who were not on good terms with each other. I remember how we operated the dairy. All the settlers brought us milk, which was passed through the centrifuge. The cream was then taken to the dairy in the town of Tuczyn (five kilometres). One day, settler Kłopotowski hit settler Wójcik in the head with his sabre, drawing blood. I think it was because of this that our dairy was closed soon after and every settler had to deliver his milk personally to Tuczyn.

There was a four-class school in the village of Drozdów but it was attended only by Ukrainian children. A school was set up in the Horbów settlement, two km from Drozdów, on the same side as Horyń. There were many more settlers there, fourteen of them. Mr A. Kozieracki provided two rooms in his newly built house so that the children of the settlers could have a small school. The children of the settlers from Drozdów also started going to this school; in summer on foot, and in winter each day somebody different would drive us - there was a queue. But this too did not last long, another misunderstanding cropped up - the settlers from Drozdów started to send their children to the school in Tuczyn.

In Horbów we were taught by Ms Janina Furykówna, who came from Kraków, and soon started living with us right until 1935 when she wed Doctor Antoni Bortnowski, who ran the hospital in Tuczyn.

That was also the year when my mother fell seriously ill, so my sister and I were cared for by my Granny and taught by my aunt. At the same time the school in Horbów was closed down. Children went to Tuczyn from both settlements, where there was a large, seven-class school. Once mother got better, we returned and from then on were taught at home. We had a different teacher every year and, each year, we took the exam in the school in Tuczyn to move on to the next class. We completed fourth grade with our aunt, fifth with Gabriela Ziemniewicz, and sixth with Wanda Antoniewicz. We got into the lower secondary school of the Sisters of the Immaculate Conception in Maciejów in 1938. We managed to finish the first grade of the lower secondary school; war broke out and the 1939 school year did not start in Maciejów.

To get to the village of Raśniki from Drozdów (two km) one had to cross the Horyń so Daddy started up a ferry. In so doing, he replaced the bridge, which was burnt down during the First World War. The settlers delivered sugar beet to the sugar factory in Babin so the ferry was useful.

There also was a field brickyard on our plot, which father founded. Out our way, all the farm buildings were made of bricks. Our house, which was already under construction, was meant to have been made entirely of our own bricks - the war prevented the construction from being completed.

Opposite our plot was an Orthodox church, a cemetery, and then the plot of settler Kłopotowski. There was a large, oak cross at the entrance to our plot.

Mrs Jasińska was the headmistress of the agricultural school for girls in Horyńgród. The school for boys was in Szubków.

After the harvest, festivals were held for those bringing in the crops on our land. The farmers from the village once put on a play in Ukrainian. Our barn was transformed into a theatre. A photograph was later taken with our orchard in the background.

Two years later, in 1939, this barn was inhabited for the whole of July by the participants of the 36th camp of the Academic Legion. Their stay in Drozdów brought lots of liveliness and movement to the settlement and village. Nobody expected that the war would begin on the first of September!

One of our great poets, when speaking of Post-Partition Poland, claimed that we “from Your surname have made a prayer that weeps and a thunderbolt that flashes”. With due respect to prayer, whether weeping or pleading, I understand, as no doubt do you, Gentlemen, that it behoves soldiers to create for the nation the thunderbolt that flash and, when need be - strike.