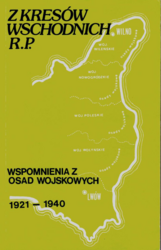 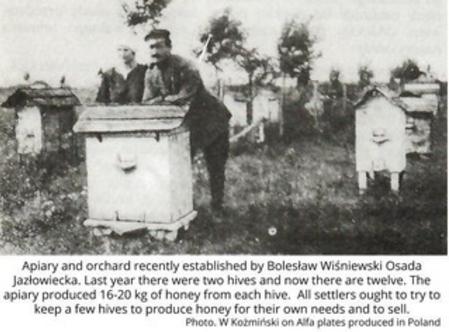 ​Whenever I think back,  there is a scene that comes before me which is bright and so clear as if it was only yesterday…  But many years have passed since this time, which is now only a page of history in the story of the military settlers of the Eastern Borderlands of the Second Polish Republic.

Spring 1921 (Easter Thursday) in the village of Ławrow in Wołyń, where the 14th Jazłowiec Lancers Regiment had its headquarters, a squadron of 100 lancers begins its march towards Horyńgród near Równe.  They are moving past, platoon after platoon, in full battle kit, accompanied by a few supply vehicles.  The shoulder flashes show many NCOs, the berets have battle insignia, there are frequent glimpses of the blue and black ribbon of the Virtuti Militari [Ed. Note: the highest decoration awarded in Polish military].  There is a concerned look on their weather-beaten faces, their eyes seem pensive, their future is uncertain, their thoughts reflect on the recent past, to what was magnificent and is now being left behind, perhaps for ever - the confident, happy lifestyle of the lancer, full of dash and vigour, in the ranks of their beloved and now famous regiment.

Who are these lancers and why do they march?  This is a special squadron formed from the demobilised soldiers of 14th Jazłowiec Lancers Regiment who have chosen to become military settlers.  For these old die-hards, seasoned by battle and shaped by cavalry action, the commands have changed.  No longer do they hear, ‘lances ready, swords in hand’, but from today it is, ‘ploughs to the shoulder, axes in hand’ – this is their immediate future.

After a three day march, the squadron arrived in the village of Horyńgród by the river Horyn, located 20 kilometres east of the town of Równe where it billeted close to the land that had been allocated for the future Osada  Jazłowiecka.

The land had been used as a former Russian artillery training ground.  There were no buildings where they could live. It was a large expanse of land approximately 1000 hectares, [Ed. Note: 2,471 acres] covered in craters and long overgrown with weeds.  Here, the future settlers of Osada Jazłowiecka were to begin a new life.

Echoes of the melancholic but at the same time haughty lancer’s song “How nice it is at war” had passed away.  Great hardship, as well as the colourful, military life, was behind us and before us stood the reality of constant hard work, starting from nothing and making the transition to civilian life.

With great enthusiasm, we went to work, but it was not easy, demanding great effort and great commitment to achieve satisfactory results.

The regiment provided us with only 100 beds, 100 saddles, 100 rifles, 100 sabres, one blacksmith’s cart, one field kitchen, one carriage and several carts for general use.  We had supplies for men and horses for a few months and our own young and strong lancer’s muscles.

Shortages of farm machinery and tools, as well as cash had a severe impact.  Also, the local Ukrainian population was quite hostile, unjustifiably claiming that the land belonged to them. With the passage of time neighbourly relations improved.   We helped them with advice and education, and taught them at the same time the principles of community living, and they in turn helped us with work on the land and informed us about local conditions.

In the first year, the land was not yet subdivided into individual plots, everyone worked together and gained an equal share of the harvest. In the following year the boundaries were marked out and everyone worked his own plot.  The area of the settlement was divided into two parts by a ribbon of woods: most of the settlers resided in the larger area, and a smaller one on which a  dozen or so settled.  The larger area was named ‘Osada Jazłowiecka’ and the smaller area, ‘Zalesie’ from ‘za lasem’ or past the forest.

In the beginning, we stayed in the nearby villages of Horyńgród, Raśniki and Koszanów. Then we began to move onto the plots and to build dugouts and huts to shelter from the rain and cold. Due to a lack of water on the land, we had to cart it all the way from the river Horyn, some 3-4 km.  The nearby woods rang with the sound of axes and saws, felling trees and producing timbers for houses and farm buildings.

The pioneering years of hard work went by.  In time most of us started families.  Mortgages became possible and planned development of the settlement commenced.  Slowly but surely life on the settlement became more balanced, each year showing vigorous growth, greater richness, a very much better life was gaining real momentum.

In 1930, we go en-masse to the regimental celebration in Lwów where we meet old and faithful comrades.  This stirs memories of times spent together under the banner of our beloved regiment. We tell them about our life and the achievements of the last years of hard work.  As the president of the settlement, I report to the commander of the regiment the following resolution from the recent General Meeting of the settlement:

'We, a handful of veteran soldiers of the 14th Jazłowiec Lancers Regiment, after the end of the war with the Bolsheviks, who were sent into the eastern reaches of the Polish Republic to guard her borders and spread Polish culture, and have survived nine years in difficult and trying conditions struggling for a piece of bread and a roof over our heads, have not abandoned the responsibilities entrusted to us and we are ready anytime to once again stand amongst the ranks of our regiment, when our homeland so requests.'

In 1931, we celebrate the 10th anniversary of our settlement.  Due to the lack of accommodation, we pitch huge tents to host visiting settlers and friends from the regiment.   From that time on we maintain regular contact with the regiment.  The regiment provides assistance at every opportunity.  Every year a group of settlers and a delegation from our settlement travel to Lwów for the regimental celebration.  In 1935, in recognition of our commitment to the regiment, the regimental commander Colonel E. Godlewski bestows upon us the title ‘5th Squadron, 14th Jazłowiec Lancers Regiment’.

The years (1929-32) of severe economic crisis pass.  Despite the enormous real difficulties often beyond the best efforts of all the settlers, beautiful, attractive farms appear across our beloved settlement.  Our fields sway with ripened corn and plots drown in a sea of green orchards and coloured flowers.

The economic boom reached its height in Osada Jazłowiecka in 1937.   At this time we construct a large brick building in the centre of the settlement, through the combined efforts of all the settlers.  The building contains a primary school, accommodation for the headteacher, general store, dairy co-operative, fruit co-operative, and a 300 seat theatre.  Also, there are offices containing 1) Osada Jazłowiecka Settler’s Union, 2) Reservist’s Union, 3) ‘Krakus’’ Squadron, 4) Farming Group, 5) Stefczyk Bank, 6) Housewives Circle.  There are courses in dressmaking, pattern making, knitting, baking and cooking.

The settlement has a 500-volume library which enjoys a large readership, its own brass band (instruments supplied by the regiment), and sewing machines (also gifts from the regiment).  Religious life is centred on the chapel near Horyńgród.  This small chapel is not large enough to accommodate all parishioners. In Horyńgród a church reconstruction project is agreed since the church was demolished during the Russian partition. At Christmas 1937, a delegation from the regiment (Major W. Nowacki, Cavalry Captain T. Ploski, Warrant Officer B. Gadzin) and the Jazłowiec Union of Friends (Mrs T. Łubieńska) along with Captain K. Olszewski from Osada Jazłowiecka sets out to meet with the Bishop of the Łuck-Szeląz Diocese.  They obtain his permission to build a church in Osada Jazłowiecka dedicated to the Blessed Virgin Mary of Jazłowiec, together with a home for the Sisters of the Immaculate Conception.   [Ed. note: Jazłowiec Union of Friends - organisation of supporters, friends and ex-pupils of the Sisters of the Immaculate Conception of the Blessed Virgin Mary founded by Saint Marcelina Darowska in Jazłowiec, province of Tarnopol in 1863. The 14th Jazłowiec Lancers Regiment has close ties to the Congregation.]

After receiving the permit, the Church building committee of Osada Jazłowiecka is formed under the protectorate of His Eminence Cardinal Primate of Poland, August Hlond and Marshal Edward Rydz-Śmigly.   The lancer-settlers, being true to their patron saint Our Lady of Jazłowiec, observe the settlement feast day on 8 December.

A series of events are organised to raise funds for the construction of the church.  After a while, donations start to flow from all directions: in Lwów the 14th Jazłowiec Lancers Regiment raise funds, in Warsaw, the Jazłowiec Lancer Veterans Association under the leadership of Major B. Zaręba, and locally it is the Jazłowiec Union of Friends at the forefront with the hard-working Mrs Teresa Łubieńska.  In Lwów plans for the church are drawn up by Engineer Dayczak and head of construction was Warrant Officer A. Wojnicki who commits his heart and soul into the work entrusted to him.  Captain T. Ploski, as the liaison officer with the regiment, spares no effort, giving up his free time to visit and maintain constant contact between the regiment and the settlement.   Other officers and NCOs (especially Major W. Nowicki) frequently visit the settlement as well as a delegation from the Jazłowiec Lancer Veterans Association and Mrs T. Łubieńska on behalf of the Jazłowiec Union of Friends.

The progress towards construction is exceptionally fast.  Dozens of wagons, our own and those of our neighbours, constantly and without a break, transport building material for the church of Our Lady of Jazłowiec.  However, regrettably, the blessing of the cornerstone scheduled for August 1939 is postponed due to the regiment being on high alert and therefore the regimental delegation cannot be present at this greatest of celebrations in the regiment’s own settlement.

Suddenly, like a bolt from the blue,  news of war shocks the settlement.

Immediately life in the settlement comes to a halt, work is interrupted and seems pointless.  The young men head for the front, the older men and youth take up arms and become civil guards, but in keeping with their commitment to the regiment and the promise of 11 July 1930 none of the settlers of Osada Jazłowiecka leave their post.

The war rages and 17 days later a red horde sweeps through the settlement.  The Bolsheviks take away weapons, arrest settlers including families, and on 10 February 1940, deport everyone to Siberia.

The deserted houses, orchards, gardens and meadows until recently alive with the sound of children, stand ravaged.  Eighteen years of achievement, sweat and toil of constant and unbridled hard work, the selfless efforts of all the settlers of Osada Jazłowiecka just bursts like a soap bubble.