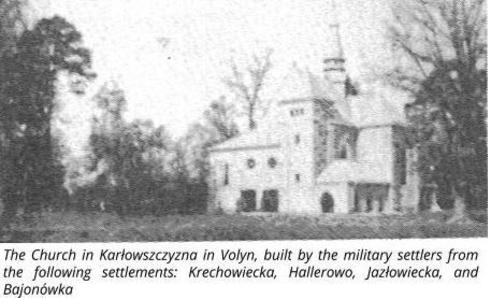 Geographic location: approximately 15 km to the southwest of Łuck, on the left of the Łuck-Lwów [Ed. note: Now Lviv] railway line. The land, in places, was undulating, black soil suitable for farming. Forests, meadows, rivers, ponds - all these were some distance away, which did not help in running farms, especially in the pioneering phase. Firewood and building materials had to be brought down from Łuck or directly from the woodland areas north of Łuck. The water was drawn by hand - a steel line, a shaft and crank - from deep wells (in places up to a depth of 50 metres).

Transport and communication: by road; farm wagons or sleighs (horse-drawn); by rail: two passenger trains from Łuck to Lwów and back; the nearest railway station- Janówka. (In the early stages of life on the settlement, my father would go on horseback to the station, get on the train, and the horse would return to the pen announcing his return with a loud neighing in front of the entrance to the house).

The settlement consisted of 45 plots of land of which 44 were 40-acre and one 100-acre. The entire complex formed a long rectangle (approx. 4.5 km), with a corner cut off by the road and the railway line.

Since the number of settlers that we recall was 42, three plots must have probably been managed by those who had found themselves there for other reasons but we’re not sure of this.

Among those mentioned was a whole array of outstanding individuals, e.g., a keen beekeeper, a fanatical pigeon keeper, a headstrong huntsman, a reliable blacksmith, a value-for-money seamstress, a proud accordionist, a talented amateur actor, a civilian in military uniform, a bashful old bachelor, a good-natured Orthodox settler, an immoderate snappy dresser, a jealous husband, a cavalryman from birth, thus, a wide range of unique personalities.

Based on the information obtained, it is likely that the local settlers came from different army units and from different military disciplines. That is why everything indicates that they started to get to know each other better during the course of the pioneering work on their plots.

The first problem that was resolved by voting was the name of the settlement. The winning proponent was Józef Chumko, a settler with a commendable history as a soldier because he was decorated with the Order of Virtuti Militari, and later, as it turned out, an exemplary farmer.

This military decoration was also held by Aleksander Pawlikowski and Colonel Dąbrowski. I think the latter had made a considerable contribution to the Battle of Lwów because a pyramid-shaped mound was created on his plot with a stone slab with an inscription commemorating the fallen who had defended and rescued the besieged city. Nearby stood a large wooden cross. That was where various kinds of national feast days, celebrations, Marian devotions during May, etc. were held.

Because of its central location, a large house was built nearby (on the same plot) which housed a four-class comprehensive school, a cooperative grocery store, and a sort of small social meeting place. In the vicinity, in a separate building, a trieur was installed (a special machine to clean and sort cereal grains intended for sowing).

Apart from the mentioned Colonel Dąbrowski,  there were another two senior officers, Captain Tarnogórski and Major Bacewicz. However, none of them actually took part in the community life of the settlement. They rented out their plots and they themselves spent most of their time in the cities where they held responsibilities. A similar kind of settler was a member of the Sejm [Ed. note: Lower house of the Polish parliament ] with the surname of Gąsior, who managed his plot through the hands of his younger brother.

The settlements’ prosperity varied depending on the owner’s agronomic skills, his resourcefulness, desire to work and... unfortunately - as is often the case - their degree of fondness for alcohol. Some genuinely worked, others took risks (I remember how, during the first few years on the plot, father tried his luck at cultivating hops and even tobacco) but there were those who still led their lives as soldiers, hence, not worrying about tomorrow.

Despite the hard work in agriculture, social and cultural life was not forgotten. Organisations like: the Local Settlers’ Hearth, the Agricultural and Horticultural Association, the Village Housewives’ Association, a branch of the “Krakus” organisation [Ed. note: An organisation with military characteristics offering biannual training by military instructors] and even an amateur drama club. They all - along with the previously mentioned social meeting place fitted out with a small library and quite a substantial radio with loudspeaker - complemented each other in general education activities, achieving clearly positive outcomes. The best evidence of this was the fact that just before the outbreak of the 2nd World War, they had already begun transporting materials for the construction of our own church, a seven-class comprehensive school and, possibly, our own dairy. How long would it have taken them to complete these ventures, it’s difficult to say. In any event, they were considered urgent requirements because up until then the closest church was 8 km away, the closest seven-class comprehensive school was about 4.5 km away (in the neighbouring Ukrainian village of several thousand), and also several kilometres to the nearest dairy.

The top priority in this case was the matter of our own seven-class comprehensive school because one could count around 120 children on the settlement just before the War. Education for them, up to class four level was already, in part, provided, whereas children on the level of class five, six, and seven had to attend larger schools in the neighbouring towns, where the vast majority were Ukrainian children. Thus, this state of affairs was far from ideal from the point of view of the parental duties of bringing their children up in a purely Polish spirit. Secondary school-aged youth (still limited in number) had to either live in Łuck, or travel there by train every day.

Reminiscing the settler times today, it is simply difficult to imagine how our parents coped with the problems of everyday life. Apart from their duties on the farm, they also had to take care of the upbringing of their children, foster the health of their families - especially in cases of sudden illness or the necessity of urgent medical interventions and even sometimes to safeguard against the aggression of extreme Ukrainian elements; particularly as there weren't any forms of mobility or communication in the modern sense - at least not on our settlement.

Whenever there is talk of the settlements, this question always appears.  “Was there any coexistence with the Ukrainians and, if so, what was it like?”. The views that are expressed are usually extreme, very good or very bad. Delving deeper into what we remember about our settlement, we came to the conclusion that, in general, we co-existed in harmony with each other. It has to be said, however, that this harmony was in actual fact ostensible and, at best, rather shallow and overshadowed by mutual mistrust.  One could say that it was a harmony borne out of bilateral necessity and calculation. The Ukrainians supplied us with the labour that we lacked, for which we would pay them in cash or in-kind, thereby improving their material conditions. The mistrust and suspicion on our part turned out to be mostly justified. Compelling evidence of this was the extremely hateful behaviour of the Ukrainians towards Poles in general (not just settlers) during the Bolshevik invasion in 1939 and the German occupation in 1941. A coincidence, a mistake, or a pre-determined target - this is not known; in any case, on the first day of the last war, that is, on 1st September 1939, three or four German bombs fell on the settlement, wounding two people, killing a horse, and destroying the home of a settler family.

The above description of our settlement (both of us come from there) has relied mainly on our own memory. We were also helped by the scraps of additional information which we have, so far, managed to collect from those (now few in number) who still remember something. We hope to collect more such information and then, perhaps, we'll describe our settlement in greater detail.

P.S. At the settlement, I was “Kądziela”, whereas, since I bid farewell to it, I have been known as “Kondziela”. But this is a different story, albeit very interesting, but not really connected with the settlement itself for it to be told here.