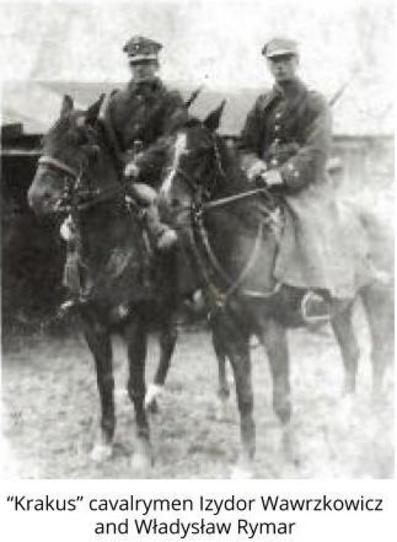 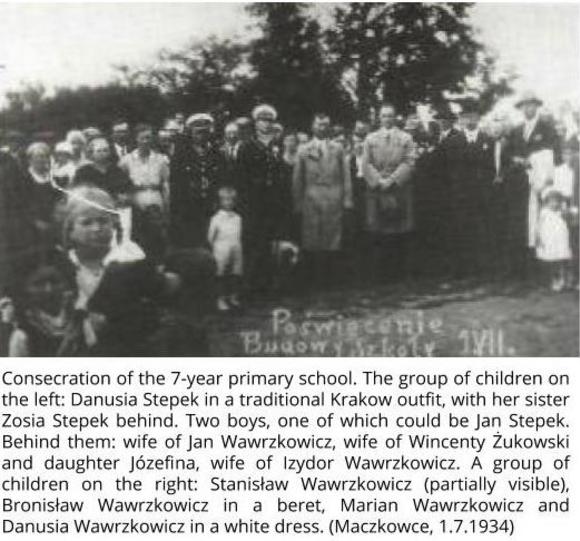 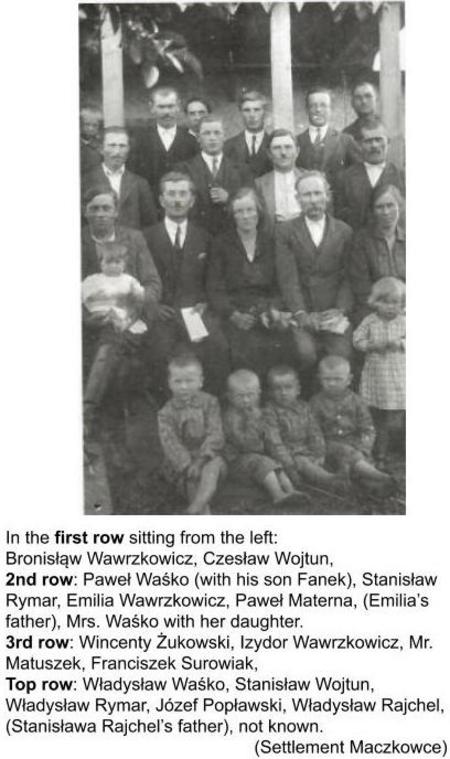 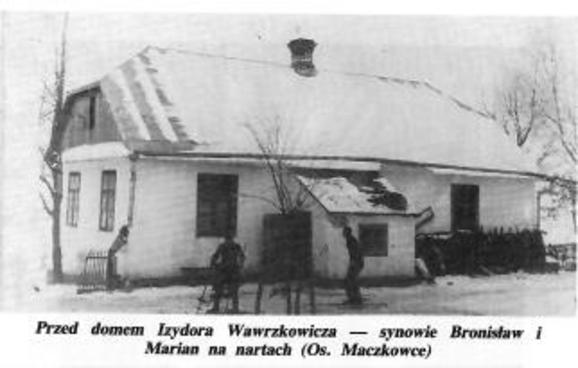 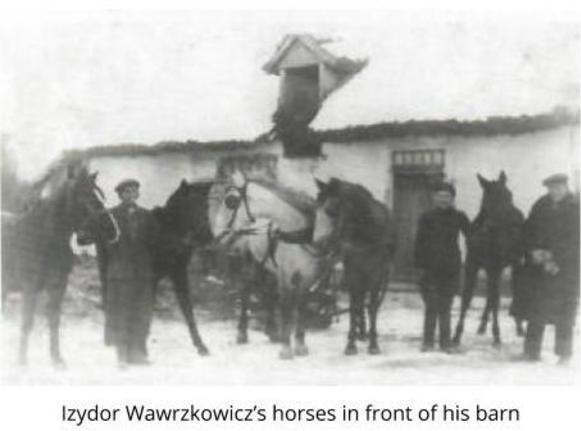 ​​The military settlement Maczkowce, as the name implies, was connected with General Maczek [Ed. note: General Stanisław Maczek was a Polish tank commander of World War II, whose division was instrumental in the Allied liberation of France, Belgium, Netherlands and defeat of Nazi Germany].  It was the soldiers under the command of (at the time Captain) Stanisław Maczek who settled in this location.  They had taken part in the campaign against Bolsheviks and Ukrainians and fought ambitiously and effectively for the freedom and independence of Poland. These young boys, some just 18 years old, exhibited wonders of bravery and courage during the war. Evidence of this were the numerous Virtuti Militari Crosses and Crosses of Valour worn on their uniforms when, later taking part in military maneuvers and training in the ranks of “Krakus”. [Ed. note: Civilian organisation with military characteristics which undertook professional six-monthly training in uniform under arms.]

I witnessed all this since our plot was used for horse training. I know the history of one of the settlers, a knight of the Virtuti Military Cross, Stanisław Wojtoń. His assault company was tasked with holding a wooden bridge, which Ukrainians tried to burn down at any cost. With this objective in mind, they [Ukrainians] rolled a few dozen bales of straw onto the bridge and set them on fire whilst covering the bridge with heavy machine gun fire.  Wojtoń crawled onto the bridge and pushed all the flaming bales into the water, then jumped into the water himself and swam towards his colleagues; the shots kept missing him.

Jeziorany Uroczysko was the original name of an estate belonging to the tsarist count Bielayev, before it was divided among the soldiers of Captain Stanisław Maczek.  Łuck was 25 km away and the closest train stops were Nieświcz - 7 km and Dębowa Karczma 4 km away. The closest habitation was Ławrów in the Łuck direction, from where on the way back home one would stop at Gałęzowski’s to buy wonderful cured meats (kiełbasa) which he made himself. I always travelled to Lwów from the train station at Dębowa Karczma, or places further away like Niwy Hubieńskie, Sienkiewiczówka, Horochów, Zwiniacze, or closer to Lwów, Kamionka Strumiłowa.

The military settlement Maczkowce bordered Jeziorany Szlacheckie to the north, which was the proud home of famous names such as Bernacki, Cichocki, Tchórzewski etc.  To the south we bordered Jeziorany Polskie, where one could find many pure Polish names like Korzeniowski, Kępiński, Socha, Kapuściński, Chaiński but they did not consider themselves nobility. They each had between five and eight acres of land; it was not much considering that some families had fourteen people. From eight acres it was hard to feed such a large family, so they joyfully received the news of the partition of Bielayev’s estate among military settlers, which certainly would need eager hands to build houses, hay barns and cattle barns.

The beginnings were very hard and everybody was forced into a very primitive lifestyle. They all arrived in the enormous Bielayev house, some with wives, with various possessions like cows, horses etc. They referred to the house [folwark] as the farm estate. It had many rooms and they all lived there until plots were allocated. Once the plots had been allocated, things settled down and one of the large salons was converted into a food shop named “Społem”. The shop enabled purchase of necessities. Thanks to substantial government assistance, Maczkowce started to look more like a settlement and by 1926 there were houses, some covered with metal roofs and farm buildings, like cattle and hay barns. A People’s House [Dom Ludowy] was built by the joint community, where rollicking dances took place, lasting sometimes till the morning.

There was no school in Maczkowce at that time, so we went to school in Jeziorany Polskie, which was located in a rented private house belonging to Mr. Chaiński. The teacher was Mrs. Janoszanka, originally from Krosno, later a director of the 7-class public school in Maczkowce. This beautiful modern school was built from nice yellow brick, in place of the demolished Bielayev building. From a distance it looked like a victory monument on this former remote area built by the people whose input and effort ensured that these lands belonged to Poland.

It was a beautiful settlement. When in the spring one looked from the school towards the plots of the settlers it looked like a fairy tale. Cherry tree alleys, flowering in white, all the way from the main road to the houses looked like white banners and the greenery of the young orchards added an extra charm. In the summertime huge fields of grain, rocked by a wind, looked like ocean waves.

The greatest activity took place at harvest time when these oceans vanished and in their place grew stacks of corn sheafs, like mushrooms after rain. Corn sheaves were heavy in Wołynia. I know as on return for holidays from Lwów, I had to repay the money spent on my education. Together with my uncle, every year I had to bring all these sheaves back to the barn. It was hard work but upon my return to Lwów everyone told me: “Bronek, what fine muscles you have” and nobody tried to pick a fight with me.

The outbreak of war in 1939 surprised Maczkowce which was at the pinnacle of its development. Children of the settlers were educated in the high schools, in Lwów, Łuck and Równe. Every year new mechanized farm equipment appeared and old horse-mills were being replaced by motors. All that was disrupted by the war with the Germans, trampled and totally destroyed by the Bolsheviks, who after 19 years, treacherously occupied this land whilst we were fighting the Nazi invasion.

During the communist rule over these lands, we had an opportunity to see what kind of neighbours we had in the nearby villages and khutors [Ed. note: A Russian form of hamlet]. Belorussians who lived in the so-called khutors were well predisposed towards the Poles. On the other hand the Ukrainians living in the large village of Radomyśl and small villages located in the direction of Niw Hubieńskie were very hostile.

Bands of militia walked around, terrorizing the settlers and during the night robbed or set fire to houses and farm buildings, so that it was necessary to take turns patrolling the settlement and watching, so that they did not steal or start fires.

All social activists, founders of the Rifleman Association and other patriotic organizations were in danger of death. One wonderful social activist in Maczkowce was Władyslaw Stepek, whom the Ukrainians wanted to shoot on the first day after the Bolsheviks came. They failed, since he was forewarned in time and disappeared from Maczkowce, getting through to the German zone where he was active and worked effectively in what became the underground army.

At the end of November 1939, I left for further studies in Lwów which I later greatly missed. I attended Mechanical-Machine School in Snopków. At the end of January 1940, the Technical School in Snopków was closed by the NKVD because a very strong Polish youth organization TOMP (Tajna Organizacja Młodzieży Polskiej - Secret Organisation of Polish Youth) had been formed there to which, of course, I belonged. I had no choice but to return to Maczkowce in Wołyń, on which, naturally, my parents insisted, worrying that I might get involved in some organisation [Ed. note: i.e. secret organisation]. My father came to take me and brought plenty of bacon butter, flour; potatoes arrived two days earlier by freight train to Mrs. Ulanicki, my second mother, with whom I lived in Lwów at Błonie Janowskie near Lewandówka.

On February 10th, my father went to get tickets at the central station because on the following day we were to leave for Maczkowce. Exactly at 10 pm, five NKVD agents came to the flat and took me to Brygidki on Kazimierzowska Street [Ed. note: notorious NKVD prison]. That was the last time that I saw my beloved Lwów.

In February 1940, the NKVD arrived at Maczkowce. Every family was given one hour to pack and all were deported to Siberia. So Maczkowce ceased to exist, one of the bulwarks of Polish patriotism and culture in the Eastern Borderlands.

According to my information all these wonderful people are no longer alive. One consolation is that their sons and daughters keep writing about them and use them as an example for their own children, that we should keep fighting for the land of our fathers and keep requesting that it returns to the nation. I am sure that a time will come when these lands will be returned to Poland and the name Maczkowce will be restored, especially since the man from whom it took its name - General Stanisław Maczek [Ed. note: born March 1892] - still lives and celebrates his hundredth birthday on this hospitable British soil.

Note: In the so called “folwark” the previous inhabitants lived in very primitive earthen dugouts.  They were not disturbed, since they were needed for the development of Maczkowce.

Józef Ogórek was a wonderful builder, who had built all the houses in Maczkowce, as well as the hay and cattle barns.