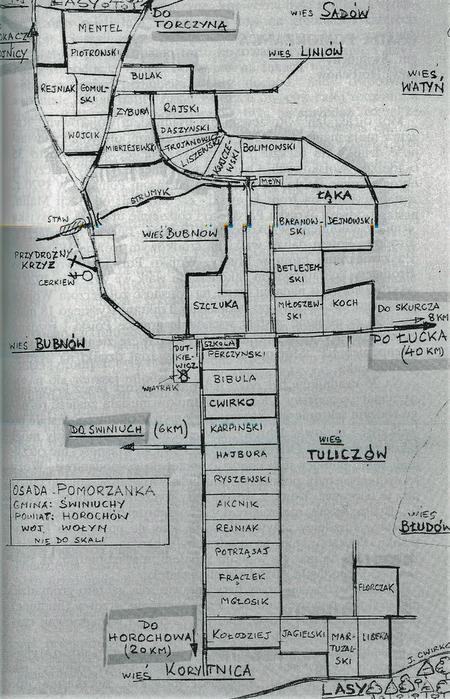 The military settlement of Pomorzanka consisted of 37 plots, and so constituted a "gathering" of just as many former fighters for the freedom of Poland. It was a rather remote place, since it was 6 km from the gmina [1] administration, the post office and a few little shops; 22 km from the county town of Horochów; 18 km from Torczyn and Łokacze where the fairs took place; 8 km from the parish church in Skurcz; 45 km from the provincial capital Łuck; 20 km from the train station Wojnica where one could connect to Włodzimierz Wołyński (Kowel-Lwów line); and 23 km from the station Nieświcz (Łuck-Lwów line).

The settlers were primarily from Western Poland, they were soldiers from the Pomeranian Division - hence the name: Pomorzanka.[2] The area on which the settlement was founded used to be a "no man's land"; no trace of buildings, a field gauged with riflemen's trenches (from which one could see the enemy sometimes at two hundred meters), artillery posts, shell craters, barbed wire, broken cart fragments, armament parts, and very treacherous unexploded devices, the more dangerous the shallower they were buried (I remember an especially tragic accident in the neighboring village where a boy who was ploughing caused an explosion - there was nothing left of him or his horses). This "military" state of the settlement required "pacification".

Before we move on to the description of the settlement in the following years, I would find it proper to commemorate the names of the settlers for their descendants, in case they decide to search for the fates of their ancestors. Let's then take a walk from neighbour to neighbour within an area of about 8 kilometres. Let's start with Libera near a state forest by the village Korotnica (I will give the number of children in parenthesis): Florczak, Martuzalski, Jagielski, Kołodziej, Małgosik, Frączek, St. Potrząsaj, Franciszek Rejniak (2) - a village mayor in the Świniuchy gmina for a couple of years until the outbreak of war in 1939, Aknik (1) - a fighter in the Silesian Uprising, Ryszewski (3), Hajbura (2), lance corporal [3] Karpiński (3), master corporal [4] Wacław Ćwirko (4), Bibuła (3), Perczyński (4), (a school), captain Szczuka (3), Koch, staff sergeant Jan Miłoszewski (5), Betlejemski, Ostrowski, Dejnowski, Baranowski (11), sergeant Konstanty Bolimowski (4) - constructed and started a mill, Krajczewski, Trojanowicz, Daszyński - lived with his parents - his father a veteran of 1863 uprising, Rajski, Mierzejewski (3), Zubera, Bulak (2), Julian Rejniak - unconditionally devoted to "Krakus"[5], Wójcik (4) - a professional warrant officer who stayed in service in the 24th infantry regiment [6] in Łuck and left the farm management to his brother-in-law, Gomulski, Piotrowski, Mentel.

Seeing the patches of land in ruins, it is easy to imagine for yourself the treadmill that the settlers worked on from dawn to dusk, for the next several years. However, only a few gave up their plots, since they had their future already secured, like the career officer in the Border Protection Corps, [7] or Mr Kupiec, [8] who was a prosperous merchant with a store in Horochów. Others, even though they could have led more comfortable lives, believing in their mission in the Borderlands - farmed. The plots ranged from 11 to 15 hectares, depending on the type of soil and the exposure. The land was assigned them by lottery. It soon became apparent, that the right thing to do was to classify the land and what it was connected with, hence, the creation of plots of various sizes. Let's take just one way of looking at it: sloping towards the North (Northern exposure) delays farm work; a depth of a well - here 6 m, there 33 m! (Mgłosik and Fronczek).

Some settlers found lodgings among local peasants, others single-handedly erected (what an out of place word in this context!) shacks out of nothing, yet others dug holes and made nests in the dugouts. Many bachelors found themselves wives in the ancient noble settlements and the established farmers provided their daughters with farm goods: a house, a cow, a horse. Those got on their feet faster than the married folk, sometimes already with children. Probably every larger settlement had "full grants" of 45 hectares, intended to establish "model farms". These were given to farmers with higher education. Such a full grantee in Pomorzanka was Captain Stanisław Szczuka. The idea itself was commendable, but not well thought out. Knowledge without money will not achieve much; and somebody highly educated is not automatically rich, especially if he had spent years on the front, rather than getting rich staying behind in the rear. Like many other full grantees, our captain got himself a regular job and equipped the farm from a distance with tools, machines, prime grain seed, a bull of the Polish Red race, Green Leg Partridge hens, [1] pure breed sheep - all new and unknown in the area. But the farm buildings had to wait for their turn. The settlers received startup loans, which were written off after a few years. They could also get loans in the county's Kasa Stefczyka.[2]

Over the years the situation improved; our farms became real farms. Straw thatched roofs turned into metal covered ones, two-furrow ploughs, cultivators, seed drills, reapers, mowers, or threshing machines became commonplace; here four cows, there six. We had 2-3 horses, each with a pedigree from an Arabian or "English" horse, stallions from the state stud farm delivered in season (just for us, at the gmina, [11] all the way from Gniezno!). We had in our settlement seven presidents, managers, chairman or directors... And so the fire brigade, [12] which served the settlement and the neighbouring villages; since the beginning, a squadron of "Krakus" [13] was tied to the fire brigade, it participated in state and national celebrations in the neighbouring towns. Its commander was wachmistrz [14] Jan Miłoszewski from the 19 lancers regiment from Włodzimierz Wołyński, he equipped it with lances and sabres, and we also received saddles and coats. Every Sunday, a practice in full gear was held, sometimes there were competitions with squadrons from other settlements. The trumpeter of our regiment was master corporal Ćwirko.

The children were growing up, they were already young people - we had organised a division of a Rifleman's Association, [15] reporting to the 24th infantry regiment in Łuck. The drills were run by Sergeant Grabiński, and the last commandant was a teacher, corporal, officer cadet Ochman. Our uniforms consisted of navy blue pants, green jackets with a red wavy line on the collar. The caps were green with a black band. We practised sports - volleyball, soccer, track and field - and we took a part in military parades during state holidays. Many of us went to Puławy for the Rifleman's Association convention in 1938.

At settler Bibuła's home there was a store with the most essential products; at the home of another settler was a school, until a real school building was constructed for a 6-year school with a larger auditorium and a stage for gatherings during the national holidays. There was a teacher's room and apartments. For further education, the settlers sent their children to the high school in Horochowo; the parish priest came from Skurcz for religion classes. At the home of settler Szczuka, his wife ran a library, with a couple of hundred fiction books, which she periodically replaced with other sets from the provincial Mobile Library. We gave up on daily newspapers because of huge delays in delivery, in its place, antennas of crystal radio sets every so often shot into the air. The Agricultural Association and the Village Housewives Association gained a following from the moment they were established.

Milk was transported to the dairy in Świniuchy.  Under the guidance of the agricultural instructor, the youth instructor and the instructor from the Village Housewives Association, a range of experiments were conducted in the field, garden, kitchen, barn and pigsty - all for the purpose of convincing people of the "new trends". Social life flourished. Despite the long distances between plots, we kept in touch; we remained the settlers of Pomorzanka to the very end. Even now, during lucky chance encounters, we greet each other like neighbours.

The next chapter of the history of Pomorzanka is entitled: SIBERIA

[9] kura zielononóżka - a traditional Polish breed
[10] a net of community credit unions founded by Franciszek Stefczyk
[11] gmina - village community administration centre
[12] There is a lack of continuity here in the Polish text. Perhaps the author had in mind that one of these leaders directed the fire brigade, and then got on a tangent talking about "Krakus".
[13] see the note 4
[14] wachmistrz - a rank in cavalry units equivalent to sergeant
[15]  Związek Strzelecki - a paramilitary youth organization