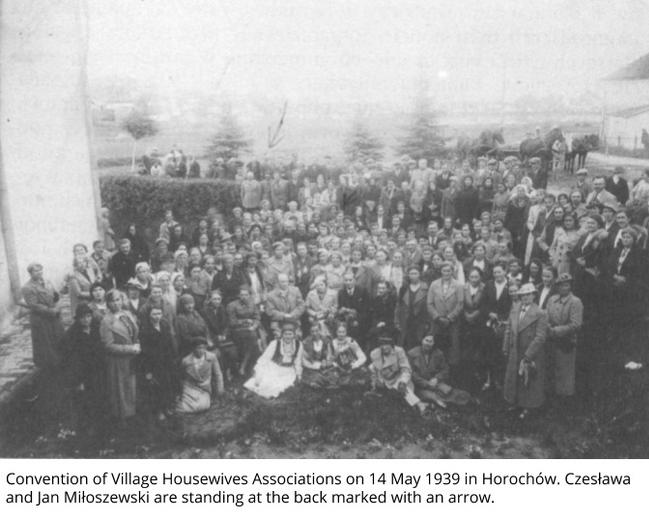 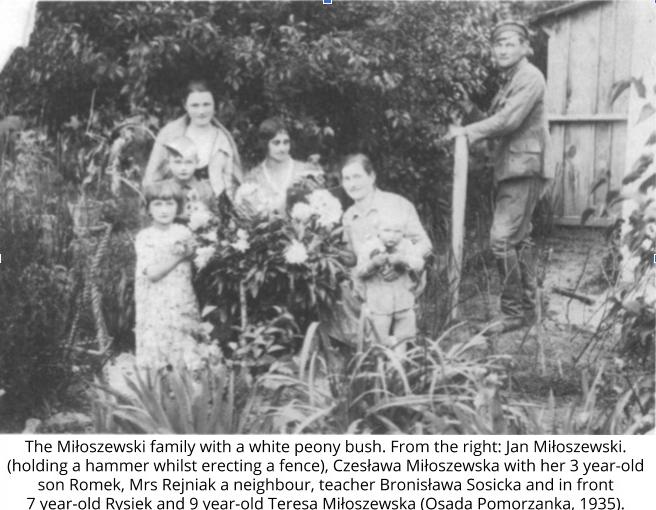 My father Jan Miłoszewski was a military settler. Together with my mother, Czesława nee Łuksza, they were granted a freehold plot on the settlement Pomorzanka. Thirty-five military settlers lived there. Settlers were former soldiers who had fought in the defence of Poland’s borders. After taking Pomerania from the Germans in 1920 they were sent to the Kiev front. Beyond Sarny, starting from the Maliny train station, a retreat of the Polish Army took place and there were daily skirmishes with Budionny's Russian Army in the areas of Równe, Łuck, Beresteczko, Brody. Later, further fighting on the central Warsaw front. After the armistice in Słucz, the Polish Army returned to Brodnica. After a complete cessation of hostilities in September 1920, a law was passed granting land to soldiers of the Polish Army but it was only after the Riga Treaty was signed on 18 March 1921 that Poland’s eastern borders were finalised and soldiers (after demobilization) were granted land in the Eastern Borderlands of the Polish Republic. My father received a plot in the Pomorzanka settlement.

Only one house was available for the 35 settlers, which was allocated by a lottery to "the lucky one". The rest of the settlers had to find different kinds of shelter. Trenches (remains from the fighting) were converted into so-called "dugouts" so that everyone had somewhere to live. Except for the granting of freehold land, settlers did not get much help with farm equipment. Carts (from the war) were broken. There were no repair shops or tools to fix them. Military horses were exhausted, sick - dying. Cattle, in the absence of proper shelter, fell ill. Settlers brought their wives to empty fields in Pomorzanka. In the beginning, life in the settlement was very, very hard. People started work with great enthusiasm and the awareness that Poland was free eased the shortcomings.

After a year of intense labour in the fields, building materials began to be gathered. Local people helped with the transport of lumber. Sometimes, they also rented out rooms to settler couples with infants.

Slowly, the families started to move into their own newly built houses on the settlement and to buy farm equipment, like ploughs, harrows, seeders, reapers, threshers, silage cutters etc. They would often pool together in twos or threes for such a purchase. A peat digging machine cost 1200 zlotys. A single settler could not afford it and required a partner. Settlers who owned meadows dug peat from them to the depth of four meters. They dried it and later used it as fuel. Fish (carp and tench) were farmed in ponds left over from peat excavation. Sheep farming was undertaken  since the meadows provided excellent pastures and sheep wool brought in good profits. Orchards bloomed, providing an ample supply of fresh fruit to the whole family, while any surplus was allocated for sale which also made a good profit. The beginnings benefited greatly from the purchase of a special type of rye (pectum granum) for the first sowing in 1922. It was called "Poznań" rye, of wonderful quality, bringing plentiful harvests. The seed of this rye was stored from one year to the next, for the new sowing.

To begin with, a settlement school was located in a private house. It numbered only 10 children. People started to plan for a larger school since the number of children was increasing. A new school was built on the plot belonging to Stanisław Perczyński, who willingly gave a hectare of land in exchange for two hectares in another spot, which he rented for a minimal charge.  He also had a good income as school caretaker. The settlement's 6-form school served children of various nationalities. There were lessons in Polish and Ukrainian. Religion classes were taught by a priest to the Polish children, an orthodox priest to the Ukrainians and a rabbi to the Jews. Younger school children were taken on trips to the nearest municipality, and the older youth were taken on trips to Kraków and Zakopane. For the youngest ones there was a well-run daycare. Five older pupils attended a high school in Horochów, where the young ladies lived in a dormitory. Living costs were 50 zlotys per month, plus a small contribution from the farm: fresh fruits, vegetables, honey etc. Apart from textbooks, the children read a magazine entitled "Płomyk" [Ed. note: flame],  "Płomyczek" [Ed. note: little flame] was for the youngest ones and "Przyjaciel Rolnika" [Ed. note: Farmer’s Friend] was for the adults.

There were cooking and sewing classes in the settlement. They were attended by the young wives of settlers, coming mostly from Eastern Poland. Ladies also belonged to a Village Housewives Association and to a Rosary Circle. The closest church was in Skurcz. A Sunday Mass was celebrated at 11 am. One had to leave by 9:30 am to be in church on time.

Life on the osada was improving. One forgot about the hard times at the beginning of the "colonization". The work was bringing results. Every settler became a well-to-do owner of a prosperous farm. Kasa Stefczyka, a Farmer-Merchant Cooperative, had been created.  A dairy was opened by a communal effort, to which large amounts of milk were delivered, since each settler had by that time many dairy cows. The profit from milk was sizable. The wealth of the settlers was growing. A "Krakus" association was also formed and prospered greatly. Its members adopted military characteristics, wore smart uniforms and were excellent cavalrymen.  They appeared during various processions, parades and celebrations, not only in the settlement but also in the county and provincial towns. Shortly before the war an idea of building a community centre developed. Captain Stanisław Szczuka offered a plot next to the school for that purpose. The construction plan had already been approved by the authorities but the war prevented its implementation.

The settlers of Pomorzanka celebrated and solemnly commemorated anniversaries of the granting of land. This anniversary fell on 8 September and was combined with church celebrations and a church fair in the parish. Everyone took part in these celebrations, commemorating this momentous occasion in the settlers' lives. The Village Housewives Association had an opportunity to shine. All the settler ladies belonged to the association and skillfully organized various parties, fetes, balls and dances, sleigh rides and traditional winter gatherings, since during winter there was more time for that sort of thing.  In summer they had more work to do on the farm, but time was always found for picnics in the woods, May devotions to Our Lady and rosaries.

We travelled to the church by horse cart. It was a beautiful road among fields and flowers, gardens, orchards full of fruit, passing by lovely, well maintained settlers’ houses. Everywhere one could see prosperity, peace and order. How wonderful were our parents’ achievements!

Now, even after so many years of exile caused by our forced deportation into the depths of Siberian Russia on Feb 10, 1940,  I can still see a picture of my happy childhood. My thoughts return to a great cross located in our beloved Pomorzanka, where each day during May, devotions to Our Lady  used to take place with the participation of the whole settlement. I ask God to let me see it one more time, to visit that settlers’ land in peace, the land so cruelly and unjustly stolen, the earth moistened  by the sweat of our parents’ hard-working hands.