Osada Szwoleżerów, a settlement of 32 farms, lay 25 km from the town of Równe, the county seat, and 8 km from Klewań. The closest town was charming Ołyka with the Radziwiłł Castle and a beautiful church. A fair was held at this church every year on the Feast Day of Sts. Peter and Paul. It was always a fun event for us. Outside the town there was an old but well-maintained cemetery where our beloved mother was buried at the age of 30.

This part of Wołyń was hilly, interesting and beautiful. Our plot bordered on the forest of the Krzemieniec Secondary School, an old and dense forest. I can remember that during my childhood years I was afraid of this deep, dark and mysterious forest. As the years passed and I grew up, this changed. The forest became an escape from the daily grind. It was a wonderful place for all kinds of pastimes such as picnics, horseback riding with my friends, expeditions for the gathering of mushrooms, wild strawberries, nuts and lily-of-the-valley, according to the season.

The settlers all had 14 hectares of fertile land a piece. Before the harvest, the rye was so high that you could not see a tall man standing in the fields. The ears of wheat, so heavy, were always bent low.  And those wonderful cornflowers! A buckwheat field in bloom is so hard to describe. On a sunny day the buzz of the bees, wasps and other insects of various kinds was so loud and the fragrance of the flowers so strong that one could never forget it! Rape, which also attracted all kinds of insects, bloomed yellow, while buckwheat had lovely white flowers.

The settlers built their homes close to the road but not too close to their neighbours. As a result our settlement stretched over 3 km. In the place where our settlement ended a community centre was established. Osada Rokitnianka began at this spot and with their united effort the settlers built a school, a community centre, a dairy, a grocery stores and a cooperative. Meetings and dances were held here and the Farmers’ Wives Association had its seat here. This was also a meeting place for the youth. During the last year before the war, plans were undertaken to build a church. An architect was hired and most of the materials were purchased, only to be stolen by Ukrainians.

Ukrainian children from neighbouring villages also attended our school. The closest village was Radochówka, located in a valley surrounded by cherry orchards. An interesting view presented itself as in the early morning the wisps of smoke rose from the chimneys in this verdant valley. Relations between the settlers and the local Ukrainians were civil and correct because they needed each other.

A 14 hectare farm with cattle, horses and poultry needed extra help to operate. During the beet and potato season and for the threshing of wheat, day workers were hired. Independent of this, there was always the permanent domestic help. This consisted of a maid (usually a Ukrainian girl), a farmhand and in the summer a shepherd. It was the common custom freely followed by all the population in the area, that on the Orthodox holy days no work was done in the fields and similarly on Roman Catholic holy days one never saw Ukrainians working in their fields.

While social relations with the Ukrainians did not exist, they thrived among the settlers. The settlers were young then and though they worked hard I remember my father carrying me, a sleepy child, to the sleigh after a Name Day gathering [1] or New Year’s Eve celebration because it was time to go home.

Our parents were a mix of people from different places in Poland. It was perhaps because of this that there was no feuding or grudges among them. I do not remember any quarrels, intrigues or gossip. Perhaps it was also because of this mix that the youth spoke with a clean and proper accent, uninfluenced by the local dialect.

Of course, not everyone was equally well off. It is difficult to describe the reasons for this, except that they were individual human beings. An insignificant minority did not send their children to secondary or trade schools. Education of the youth was expensive at that time. Tuition fees were not excessive but boarding schools or dormitories and clothing, often in unnecessarily large amounts, were burdensome.

Our closest neighbours were the Wojciechowskis. Mr. Wiktor Wojciechowski, a warrant officer in the army, was a  nice cultured man. Mr. Wojciechowski and my father had been friends from the days of their youth in the Army of General Haller. The Wojciechowski's' eldest daughter Wanda was my age. How close we were, and the secrets and girl talk we shared! Our future seemed so bright, and respite for our parents seemed so assured.

All our farm buildings were new constructions and we could afford all kinds of farm machinery to help with the work. During the last years before the war, I lived in Równe where I attended secondary school. During this time Osada Szwoleżerów underwent some changes. A well-stocked grocery store was opened and a purchasing centre for grain was established in Klewań. Settlers from all over Woyłyń brought their grain here for sale. Before this, the grain was sold to local Jews from Ołyka and Klewań.

When we were told on 10th February  1940 that we had an hour to prepare for the road it seemed to me that the earth was crumbling beneath my feet and that I would never feel sure of anything on any ground again. How did our parents feel? After living through WWI and 20 years of hard work, no longer young, they lost everything in the space of one hour.

If not for WWII, what a vibrant, rich Polish culture would have pulsated on the soil of Wołyń?

As a daughter of a settler, I feel the need to remember one of our settlers at Osada Szwoleżerów who very much deserves to be remembered among the ranks of the settlers. His name was Karol Szałaśny who served as Agricultural Correspondent for our Powiat and who was an excellent organizer and community activist. The best interest of the settlement was always foremost in his mind and he was always ready to help and counsel those in need. He was decorated with the Order of Virtuti Militari [2] and received the Gold Cross of Merit at our settlement. Mr. Szałaśny and my father were good friends. To this day I remember the sound of the bells on the harnesses of the horses pulling the sleigh, announcing the arrival of Mr. Szałaśny, sometimes with Lt. Lękowski, as he arrived to hunt in the nearby forest. This friendship survived the war, in spite of the tragic fate of both their families. They visited each other often and helped each other, although they were separated by quite a distance – Karol Szałaśny lived in Bielsko Biała and my father in Toruń.

[1] The highest military decoration in Poland.

[2] In Poland, as in many Catholic countries in Europe, people celebrated the feast day of the saint after whom they were named rather than their birthdays. 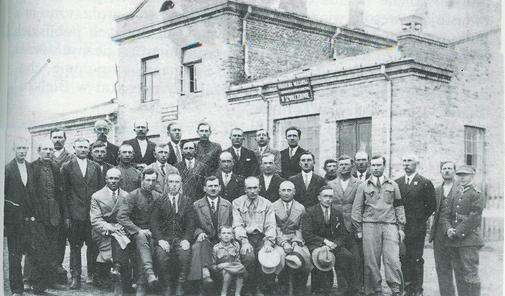 The club at Osada Szwoleżerów 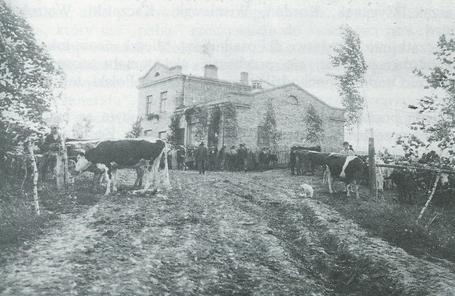 Settlers from Szwoleżerow and Rokitnianki in front of the Club.