The settlers from the Teklówka settlement and from the Bożów settlement (next to the village of Bożów), kept together. We would travel to church in Horochów, 5-6 km. The settlers built a school just before the war, prior to that one attended school in a private house.

The settlers had their own orchestra. It played at dances, fetes, harvest festivals and, of course, at parades on national holidays in Horochów.

The size of families ranged between one and five children: four on average. The lower secondary school was in Horochów and that is where a few children went. Some also went to Łuck and Białystok. The following organisations operated in the Teklówka settlement: “Krakus” [Ed.note:An organisation with military characteristics offering biannual training by military instructors], “Strzelec” [Ed. note: Rifle Association], “Sokół” [Ed. note:organisation for physical education and sport] and the Village Housewives’ Association.

Mum is with us, three of us live in Great Britain, sister Stefania in Spain.

A group of “actors” after the play put on by the comprehensive school (Teklówka Settlement, 1935)

Czesław Szott from the Teklówka Settlement — “Wójt” elected administrator of the Municipality of Skobełka, leading recruits to the medical committee. At the front is the settlers’ orchestra, which always accompanied dances, fetes, harvest festivals, parades and national feast day celebrations. 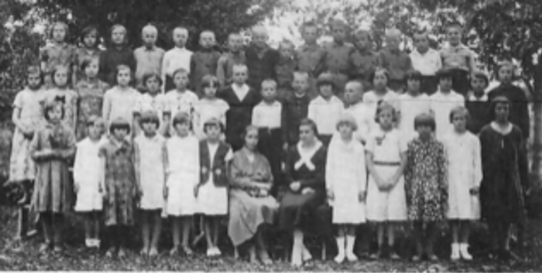 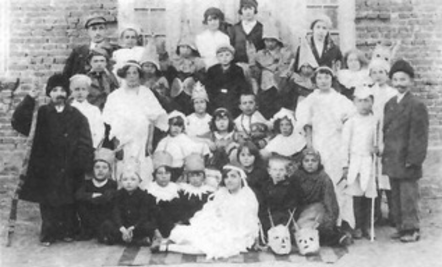 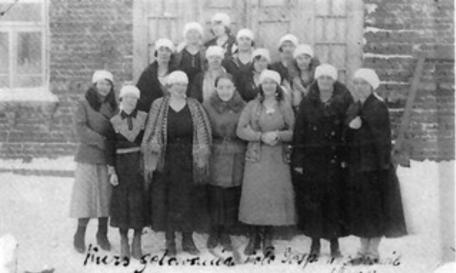 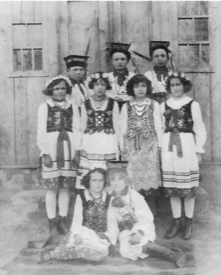 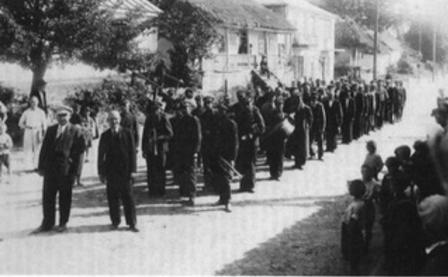